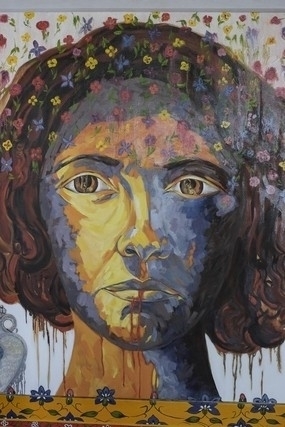 On any given Saturday, even in the searing heat of the summer, Zahidah Zeytoun Millie gets up at sunrise, takes her small bag of watercolours, brushes and paper and sets out on her kayak into the mangroves along Umm Al Quwain’s coastline.

Once there, she sits in her kayak on the water and paints the emirate’s stunning natural scenery.

“When I use my muscles for effort, then the stresses of life fade away and then, when I take my place under the mangrove tree, I feel I am in heaven. I start sketching and I don’t stop for hours,” she says.

Zeytoun Millie is a Syrian artist who has lived in the UAE for more than 12 years and established a career for herself in the Northern Emirates.

She uses unconventional colours such as blues and purples to paint the desert landscapes. In her portraits, the oranges and ochre tones of the sand appear in people’s faces.

“I use colours to explain my feelings,” she says. “I started working with these palettes when I moved to the UAE because I take in everything around me and then I put it out in my canvases. That is the way I work.”

Zeytoun Millie has lived in Ras Al Khaimah and Fujairah, where she immersed herself in the mountain life and spent a lot of time painting the wadis and the abandoned villages near the coast.

When she moved to Umm Al Quwain almost two years ago, she started the new pursuit of kayaking.

“It helps me deal with the conflict at home,” she says. “Every day we hear the news and it is getting worse, so I started kayaking as an escape.”

Zeytoun Millie’s family, including her mother, sisters and aunts, live in east Syria and are mostly safe, but that doesn’t stop her from worrying daily and using art as therapy.

Last year, her painting Zahidah 5, a self-portrait, which also bore the words of an Omar Khayyam poem, was shown at Sikka Art Fair in Dubai. It was a comment on the Syrian conflict and part of a larger series that she completed after receiving her master’s degree from Monash University in Melbourne, Australia.

But working from her home studio, which is just 800 metres from the water’s edge in Umm Al Quwain, Zeytoun Millie finds inspiration all around her.

“I love the environment and I thrive in the peace and quiet,” she says, “but I also spend a lot of time reading.”

All over her house are paintings produced after she has delved into a new subject. On the staircase, for example, hangs a portrait of the Egyptian feminist writer Nawal El Saadawi, whom she greatly admires. Upstairs on her desk, an interview with the author, who has been imprisoned for voicing her political and social views, is framed.

Also scattered around her studio are books on history, astrology, mythology and art.

On her work desk is a clay pot, part of her current series, The Beauty, which explores the duality of the perception of beauty by celebrating ugliness as well as conventional beauty.

“I started thinking about this series in 2011, when I read the obituary of Hanna Segal,” explains Zeytoun Millie.

Segal was a prominent British author who wrote about symbolism and the philosophy of understanding creativity and beauty. Segal’s books led Zeytoun Millie to read about astrology and delve deeper into science and come up with the idea for her newest works. In these, she has painted on varying-sized clay pots that are supposed to symbolise the human form as having been moulded from clay as well as the circle of life – meaning, when we die, we return to the earth.

“I discovered there is a huge connection between philosophy, astrology, mythology and science and, taking a cue from another Khayyam poem, I decided to paint on clay pots.”

She doesn’t know yet where they will be exhibited, but there is a growing interest for her work in the capital.

Having been exhibited numerous times in hotels in the northern emirates and in venues such as the Ras Al Khaimah museum, Zeytoun Millie now has some of her pieces in Salwa Zeidan Gallery in Abu Dhabi on Saadiyat Island.

She hopes the new series will be of interest to collectors, but also stresses that it should be accessible to everyone.

“I try to make my work as simple as possible, although there is always quite a complex theory behind it,” she says.

“I always work with the duality of things. I started with landscape, light and shadow, then yin and yang and now I am working with beauty and ugliness. I am interested in symbols and how they connect everything, even the past, present and future.”