Only a few days before the national celebration, the terrorist group Daesh brutally killed dozens of soldiers belonging to the 17th troop in the vicinity of Raqqa city 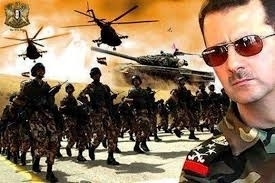 Text messages marking Army Day are sent to almost all citizens, extolling the triumphs of the armed forces and urging everyone to support them.

Cars cruise the streets of many cities, displaying posters and flags honoring the day.

But none of this negates the extreme divisions within the country, and the differing opinions on the arrival of Army day, which comes on August 1 every year.

Only a few days before the national celebration, the terrorist group Daesh had brutally killed dozens of soldiers belonging to the 17th troop in the vicinity of Raqqa city.

And hardly a day passes without news of army soldiers, and officers, involved in killings, thefts and corruption, in addition to the obscene and unprecedented accumulations of personal wealth.

The Crisis Within the Army

It is no longer a secret that the army is going through a severe crisis, having lost large numbers of dissidents and deserters. In addition to that, thousands of young people have decided not to do military service. There is also a lack of discipline in the army, among both soldiers and officers.

Also important has been the way in which the army has been used as a militia by the regime. This factor is perhaps the main reason the army has suffered a huge loss in popularity, and led to huge popular divisions over its role.

“There is no doubt that the army has a great national value, which is equivalent to the value of the homeland itself, but when the army intervened in the national internal fighting, this created different reactions and widespread criticisms were expressed about the legality of such intervention.

“The two disputing parties," continues Abu Lutfi, "are Syrians, and the disagreement over the involvement of the army stems from differing interpretations of the nature of the conflict."

For the government it pretends that it's a security threat of the country, and thus views the intervention of the army as a national duty, no less than defending its borders. But the other party considers it a conflict between the authorities and a group of civilians, and therefore the army should not be involved.”

What is the Army’s Role?

Previously, celebrations of Army Day weren’t public celebrations but rather purely symbolic media events, displays of military rituals and ceremonies. This was due to the private nature of the armed forces, and a desire to keep them removed from public life. Even criticizing the army was dangerous, as the sanctity of the army was a given.

But the army’s involvements in the conflict has caused extreme divisions, especially after the crisis became more severe, and allies on both sides were brought in.

Mohammed, an under graduate student, supports the army and said that, “It is normal for the army to intervene to protect internal security. This is common in various countries around the world, not only in Syria, and the army is capable of restoring security to areas across the country. Without the army the whole country would have been destroyed.”

But Nisreen, a woman civilian activist, criticizes the army’s involvement. “The army loses its moral compass when the national borders are no longer within sight and it is instead focused on fighting internally. The justification of the army’s intervention in the armed conflict has become a condemnation of it.

“Its involvement in the conflict aggravated the crisis between the Syrians, when instead it could have played a much more important role, standing at an equal distance from both parties.”

This year’s army celebrations were timid amid these divided opinions over its role in the current crisis.

Some children chanted slogans in support, such as “May God protect the Army,” while in other areas of the country, people could only associate the army with the destruction of their homes and towns, and the looting of their properties.

Any reconciliation of these two opposing views is some long way off, as it is clear that the army is less popular today than at any time in its history.