The case of Palestinians differs from all other cases, because the Palestinians lost their native country, Palestine 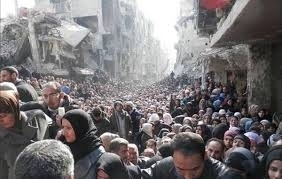 For as long as the world has mocked the phrase “cosmic conspiracy,” that journalists loyal to the regime have insistently repeated since the first days of the revolution, I don’t deny that [the phrase has] been associated in my mind with the image of the presenter on Syrian state television, exaggerating to display her charms despite the torrent of blood all around. But all Syrians have begun to repeat it, [as they] suffer pain, and try to wipe away the tears of their children. The talk about conspiracy is not circulating among Syrians alone, rather the idea is present in all discussions among Palestinian refugees, expressing their having fallen victims to major forces that target their presence in every corner of the earth.

In 1948, to facilitate the establishment of the state of Israel, the Palestinian people were uprooted from their land and deported to neighboring countries. According to UNRWA, at the beginning of the Syrian revolution, the number of Palestinians in Syria was about 540,000. By the beginning of this year, about 170,000 of them were displaced within Syria. More than 100,000 had fled to neighboring countries, with up to 51,000 thousand in Lebanon, 11,000 in Jordan, and about 5,000 in Egypt, while others headed to Turkey, Gaza, and European countries. Some Palestinians reached distant places in East Asia, the Americas, Australi,a and elsewhere.

The insecurity of the situation in Syria pushed thousands of Palestinian refugees to take to the sea to seek survival. Dozens of them ended up as unidentified victims in graves marked only with only numbers, or as food for fish in the Mediterranean Sea. One could argue that the migrations are part and parcel of the outbreak of war. In 2006, hundreds of thousands of Lebanese were displaced. Before that, millions of Iraqis were displaced from their country. Today, the case is the same for Syrians. Nevertheless, the case of Palestinians differs from all other cases, because the Palestinians lost their native country, Palestine. They are still on their meandering trip, writing their own history full of calamities, and this is the secret of the distinct difference. This is the essence of the Palestinian tragedy.

The young man, Wesam Amin Ghoul, from a Palestinian refugee camp in Daraa, [Syria,] was the first Palestinian victim, fatally shot by Syrian security forces on March 23, 2011, simply because he had transported two wounded Syrians involved in the protests that broke out in the city. This crime served as the spark for the outbreak of the Syrian Revolution. Stories of Palestinians martyred by the Syrian regime’s bullets and rockets circulated in various refugee camps and other neighborhoods where Palestinians lived alongside their fellow Syrians—where they shared poverty, distress, and lately death, in Daraya and Moadamyeh. And in Daraa, Husseinia, Sayieda Zeinab, Al-Nashabia, and in the refugee camps of southern Ramel, Yarmouk, Palestine, the Eastern Ghouta, and in every inch of Syria.

But it is interesting that with the intensification of the pace of bombing and the destruction of the Palestinian camps by Assad’s forces, Syria continues to claim it is against Israel. The position of the neighboring countries and the whole world toward the Palestinian refugees in Syrian grew more and more suspicious. While Lebanon has received more than a million Syrian refugees, it expressed gross distress concerning the presence of 50,000 Palestinians refugees [in Lebanon]. The paper circulated by the Department of Public Security at the Rafik Hariri Airport raised a wave of condemnatory reactions. In an official statement, Human Rights Watch publcy accused the Lebanese government of forcing more than 36 Palestinians to return to Syria, exposing them to very grave danger. The leaders of the civilized world did not do anything to Jordan, which expelled a Palestinian woman who fled with her family from Daraa to the Zaatari camp, just because she was a Palestinian. Being married to a Syrian was not enough for her to receive consideration and be treated as a Syrian, at th every least. It is worth mentioning that other countries, such as Egypt, Iraq, Turkey, and the rest of the world  might accept granting some amount of visas to Syrians, but they absolutely refuse, under any circumstances, to grant such visas to Palestinian refugees. It is also worth mentioning that all of these countries set up camps for Syrian refugees, providing services inlcuding schools and other services, but they all have also prevented Palestinians going to those camps or schools.

Perhaps what happened, and is still happening in the Yarmouk refugee camp—which Palestinains call a “capital of the Palestinian diaspora,” for the killing, destruction, and starvation—is evidence of the complicity of the various parties to crush this symbolic camp and abort the cause of the Palestinian people. One third of the Palestinian refugees in Syria were living in the Yarmouk camp, located south of the Syrian capital of Damascus. After the fighting intensified around the camp, it became a refuge for more than a million people, displaced from nearby neighborhoods. Nowadays, however, UNRWA reports emphasize that life is fully halted in the camp. The situation is described as horrible. UNRWA claims that some 18,000 Palestinians are still trapped inside the camp in the very difficult conditions of a severe food and medicine shortage, and very high rates of death due to hunger are recorded. The majority who have died are children, whose little bodies have not been able to resist the circumstances. The Syrian Revolution General Commission announced in a statement that the number of deaths caused by hunger in the camp has exceeded 162 people in almost two months.

An old Palestinian refugee woman, Um al-Abd, an  inhabitant of the neighborhood of Dummar, says that men of one security checkpoint arrested her son for possession of a Palestinian passport. They took him to the Air Force Intelligence branch in Damascus. When she was asked about the story of her son’s arrest, she said, "We had to come to Syria from Jordan after the bloody events in September 1970. Here I  gave birth to my son Ammar, and he grew up and married here. The registration document is his only own document, which was given to us by the Palestinian embassy, it [serves] as a Palestinian passport accepted by some countries, allowing us to travel. When the officials at the checkpoint stopped him and saw my son's passport, they believed that he was an Israeli agent. They asked how he, born in Syria, could get such got such a passport? Since that day I have not seen or heard any news of him.”  This story, recounted by by the woman, is a new page in the book [recounting the] voyage of suffering experienced by the Palestinians.

Omar, a Palestinian child who lives in Sweden away from his family, his home, and his peers, also found himself lonely in the farthes corners of the earth, just because he is a Palestinian from Syria. After the ban imposed by neighboring countries on the entry of Palestinians, his parents could not reject the only option to save the lives and futures of their children. His parents paid all their savings to smuggle their child to Sweden in order [for him] to obtain Swedish citizenship, and protect his existence. But the child’s dreams do not exceed the dreams of any other child looking for a happy life with his family. When his Swedish teacher asked the children to draw the flag of their country, he simply asked her, “I am puzzled about which flag I must draw. I am originally from Palestine, but I was born in Syria, and I abandoned both of them…. Which national flag should I paint?”

The targeting of Palestinian refugees in Syria by Assad's forces [continues], though [the regime] had claimed opposition [to Israel] for decades, while at the same time preventing any military action or armed resistance from Syrian territories against Israel during the rule of Assad (both the father and the son). Rather, the Assad regime’s bombing of the [Palestinian refugee] camps in Syria, exactly as Sharon wished, is simply a service free of charge, and a show of loyalty to the Zionist occupation. The dirty role played by the world’s governments toward this people is a service in favor of Zionism, and a consolidation of this Zionist state on the land of the Palestinians. It's really a global conspiracy.