Killing them reshuffles the cards and arouses the feelings of Syrians 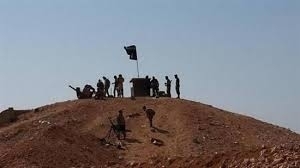 “Those pictures are shocking… heads are falling, blood disperses in a gloomy desert populated only by the sound of heartbreak and 20 aged eyes, mostly belonging to recruits in the prime of their life, trembling from horror, who did not have any say in the decision to be punished one day by a sword that is unsheathed upon their necks, which know no mercy. Strangled cries go out in one bare naked parade toward death, without resistance, saying nothing, and without anything to defend themselves with, just awaiting the knife's edge on their necks. Just asking, perhaps—without moving their lips, in a voice haunted by the reign of Bashar al-Assad, under which these wild, blood-lusting, destruction-hungry, and toxic creatures live— Why are you are presenting us upon the altar of the Islamic State?”

So goes the scene, as described by one of the oldest rebels against Assad. One of the rebels of the peaceful movement said, “I do not hate them, and I'm not happy to kill them, this is not the culture of revolution anyway, they are just sacrifices kept by Assad in his army to give them, as he did always, as gifts for death, for begging for sympathy or to secure some other end. The enemy of Assad – as he calls himself –says that Bashar, since the beginning of the revolution, was using the recruits and some of his officers as bait to be killed without batting an eyelid. He often put them at checkpoints in and around cities without providing them with ammunition, while at the same he committed crimes and massacres of unspeakable cruelty against demonstrators and unarmed people, forcing himself to carry arms. He says that Assad always exposed them, putting them at the front of rows, using them as bait to be killed without having the ability at any time to make a decision.

A video posted online shows a procession of hundreds of captured soldiers belonging to the Assad regime (the number as published on sites belonging to IS was that 450 prisoners were arrested after IS took control of the Tabqa military airbase in Raqqa province) were led by gunmen from IS into the desert. After viewing their interrogation one by one, they were killed by various means, including slaughtering by knife and being shot to death.

IS dominated the Division 17 and Brigade 93, as well as other locations in the province of Raqqa, killing all of Assad’s soldiers who were in the area. The leadership did not show any signs of trying to protect them. Many voices raised at the time said that the regime’s military leadership deliberately ignored the soldiers’ requests for help, and did not send them any reinforcements to protect them or secure them a safe withdrawal, and so left them as a valuable hunt for slaughter. Thus, the regime sent out a message to the world—in response to the reports that came out some time ago—saying that 80% of the IS operations were directed against the Free Syrian Army, and that the targeting of the regime was minimal, so the position of the regime and IS was, in this case, reversed—and here comes the role of these soldiers.

IS easily extended its control over the military airport of Raqqa; information says that more than 800 soldiers were there, in addition to those who sought refuge there coming from other military bases that had been earlier occupied by IS. The military leadership in Damascus urgently sent a plane to the Tabqa military airport to selectively carry away the most important officers in order to save them, leaving behind hundreds of sergeants, rank-and-file officers, security officers, and recruits who were arrested by IS and then taken away in a procession to be killed by having their throats slit in front of the cameras.

The regime media and TV networks ignored the fact that 450 Syrians were soldiers of the regime, and that they defend Assad's crimes day and night. They had been driven, naked and humiliated, to their death, and their bodies were lined up like an endless railway of flesh, without mentioning or mourning them as having fought with and for him, while the regime, the leadership, and media ignored the declaration of mourning for them. Negligence and irreverence for the Syrians' lives provoked some opposition to Assad. The reaction was not only against the regime and its media, but came also from victims and supporters who directed their anger toward the defense minister, thus ignoring the real culprit and the one primarily responsible for what is happening.

Azzam Amin—a member of the Syrian opposition—spoke about the theory of the scapegoat who is chosen by a group of supporters, saying, “In brief, my friend, the tyrant’s supporter, Defense Minister Fahd Freij, does not bear the brunt of the responsibility for the crime of the execution of 500 Syrian soldiers and the fall of Tabqa Airport and others, but in my opinion, it is the head of the regime.”

Many intersecting opinions said that what happened was a coordinated effort agreed upon by IS and the regime—and each of them has an interest in that. Further blind violence and murder in that shocking manner adds to the dread of IS and supports their claims of supporting the revolution. This, in turn, is what gives the regime a real license for claiming that they are a target for Islamic terrorism represented by IS, and that the regime stands with the international community to face it. This is exactly as Mary Zyada, a Syrian educated activist and a supporter of the peaceful movement, says—that these IS massacres of regime soldiers come in the context of supporting the regime's argument to the international community that it is a warrior against terrorism.

Hanan Maarouf, an opposition activist, mentioned on his Facebook page that not all of the regular army fought. He says that a lot of them try not to join the army, but the soldiers realize that the punishment for most desertion is certain death, directly by gunshot or by torture. Fear is legitimate and desertion is neither an option nor easy in many locations. Many people in the army who help to leak information—senior officers and criminals—are really the first to flee and leave behind the helpless.

Other voices see in the killing of these soldiers—even if it came at the hands of IS— revenge and a just punishment. All military personnel are involved in the killings, and defending them is considered to be defending a murderer. This view sees the reversal of IS and the regime as coming as a natural repercussion of IS having been left to extend its control over many areas. They believe that executing these regime soldiers will send a strong message to anyone who stands with the regime, or helps it, or who keeps silent, that a similar end awaits him. A third category [of voices] blesses the efforts of IS and considers it a great achievment that must be rewarded. The supporters of IS publish and distribute photos and videos.