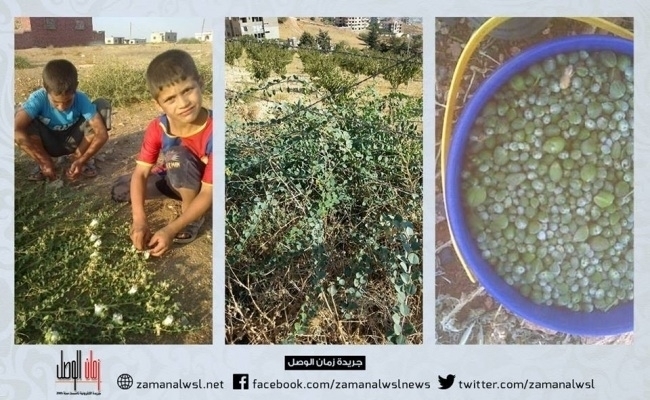 Harvesting caper berries and caper flowers, known as “kabbar" or "shaflah” in Homs, has been completed in the north eastern countryside of the province, after long and hard work for more than three months. The work secured jobs and livlihood for many in Homs, especially at a time of high unemployment.

Sources told Zaman al-Wasl that caper berries’ prices have risen this year and reached $2 per kilogram, the highest in 15 years.

Around 10,000 people work on harvesting capers over three months of summer in the villages of the Makhram area.

Many workshops for collecting caper berries, which look like olives, have sprung up in the area. They prepare the product for traders from the northern countryside who manage to smuggle the product to Turkey and to Europe and Gulf countries afterward.

Ahmad Solaiman, a workshop owner, told Zaman al-Wasl: “we sort caper berries by size and keep it in water and salt, waiting for traders to come for collection.”

Solaiman said that caper's production was affected by the bad conditions in Syria, but collecting and harvesting are still almost the same.

Many nutritional experts consider capers useful for atherosclerosis – hardening of the arteries – and liver enzymes enhancement.

Many consumers use it as appetizer or with meat and fish.

On the other hand, research on the plant at al-Baath University five years ago revealed that caper plants do not contain more than water, glucose and protein.

Capers have fleshy leaves and large white to pinkish-white flowers. The plant is best known for the edible flower buds, and capers are often used as a seasoning. Caper berries are usually consumed pickled. Other parts of caper plant, like roots, are used in the manufacture of medicines and cosmetics.

The caper bush requires a semiarid or arid climate.

Harvest duration of at least three months is necessary for profitability. Intense daylight and a long growing period are necessary to secure high yields. The caper bush can withstand temperatures of over 40°C in summer, but it is sensitive to frost during its vegetative period. A caper bush is able to survive low temperatures.

In fact it possesses anti-thyroid activity and may contribute to cancer prevention as selenium, present in capers at high concentrations in comparison with other vegetable products, has been associated with the prevention of some forms of cancer.

Capers can be grown easily from fresh seeds gathered from ripe fruits, and it can grow from the stem as well.The species has developed special mechanisms to survive in the Mediterranean conditions.