The sons of Suweida are avoiding military service 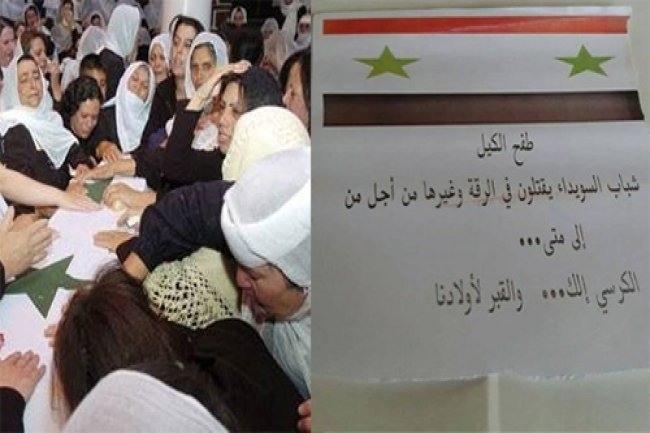 Not a day passes in Suweida in the south of Syria without at least one funeral for a military man killed during his service in the army.

Grief has taken hold in the city and the condolence cars tour the streets announcing the death of somebody killed during doing his national duty, calling on people to attend the funeral the next day, or that the news of the death of someone else has arrived but his corpse hasn’t arrived yet.

Hundreds of young men from Suweida have been killed during the war, and despite people trying to convince the regime to allow their sons to complete their military service within the governorate, the operations of recruitment are still going on, though many young men have escaped the military service (About 12,000, according to local statistics).

Since the regime declared its war and turned the soldiers and officers into murderers and criminals, many young men from Suweida refused to serve in the army. Several sheikhs issued a statement prohibiting the Druze from holding prayers for those killed in the fight. It is noticeable that both the pro-regime and anti-regime sons of Suweida refuse to serve in the army.

During the last few days, the city has witnessed the first incident of its kind;  a group of young men delivered a statement saying they had had "enough".

"It is enough. Our sons are being killed in Raqqa and other cities. Why? Until when? It is the chair for you and the coffins for our sons!" the statement read.

Interestingly, the group doesn’t belong to the opposition, actually, but in fact expresses the position of the pro-regime and neutral majorities. The statement was delivered to many schools and neighborhoods in the city.

Some activists think that the regime avoids sending huge numbers of corpses of soldiers killed in battles in order not to provoke the inhabitants of the city, especially since some defectors from the army have reported that the regime puts the Druze in the front line of any battle.

Many corpses that arrived in the national hospital were shot in the head or in the back, which seems to be field assassinations carried out by security members dedicated to punish those who refuse to open fire on civilians. Furthermore, many military men are missing, and their families are still hoping that they are alive.

There are many stories related to the sons of Suweida who refused or escaped the military service.

Abu Omar, 30, is married with two children, and lives in a village near Suweida city. He used to work on his pick-up to deliver food to the villages in the countryside of the governorate. He quit his job recently and settled in his village due to his fear of being arrested to serve in the army, especially that his name is on the list of "wanted" at security checkpoints.

"I am jobless now and I don’t want to serve in the army because my children need me more than that war. I am not with or against the regime, I just want to live in peace with my family," Abu Omar said.

Hassan, 24, couldn’t find a way to escape his military service except through breaking his leg. He asked his cousin, a doctor, to help him do this, and when his cousin refused, his brother carried out the mission. He got 15 days off his military service, but he was obliged to go back to the service afterwards.

"The family is worried about my brother, we don’t know whether he will come back again safe or dead," his brother said.

Some government employees have stopped going to work because they were told they are wanted for the military service. Abu Suhail is one of them. He said he quit his job because he was told he was wanted.

"I don’t want to fight beside any party in this war. I demonstrated in support of Assad once, but then I realized that everyone is fighting for himself, and only the people are paying the price. The officials should send their sons to fight, not the sons of the poor who already have nothing," Hassan said.

The sons of Suweida who live abroad cannot go back and spend their vacations in Syria because they fear the regime may recruit them in the army, especially after some arrivals have been arrested at Damascus airport and others at the military checkpoints scattered across the governorate.

The sons of Suweida refuse to serve in the army because they realized they are not more than tools in the hands of the regime, attempting to retain its power. Other reasons are poverty, unemployment and migration, which have more than doubled in the last three years. The compensation, which was two goats, provided by the ministry of agriculture to the families of martyrs provoked the people in the governorate, including regime supporters who rejected it as humiliating.