Offices that aim to spread Shiism have been established in al-Amarah, and in al-Amin there is also an office that supervises missionaries who live in the neighborhood and have recently become Shia 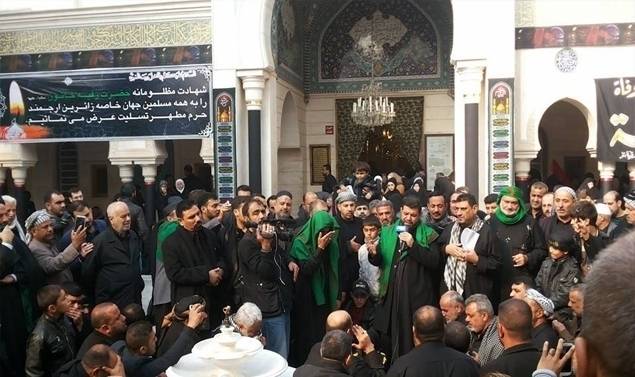 The regime has openly worked since 2003, as many Syrians have seen, to spread Shiism and encourage people to join the Shia sect in exchange for regime support after they pledge allegiance to it. This has been for political gains, which have become clear following the overthrow of the Baathist regime in Iraq, for the system of rule in Syria. The regime has done this diligently through individuals and civil institutions built with Iranian support since 2012 by attracting the widest possible swathe of society, and especially in the capital Damascus, according to the depth of religiosity in some regions of the capital. Likewise, some institutes have undertaken special studies and conferences to explicate the Jaafari sect and Shia thought in the capital, Damascus, in the area of al-Marjah with Iranian advisory, financial, and moral support.

These days, the interior of this neighborhood is not spared these scenes and phenomena, which are common among the people and in its commercial stores and popular markets. Aside from the pictures and posters that glorify the Syrian president alongside Hassan Nasrallah and Khomeini, you find that there are other things that have changed in this neighborhood, as in other neighborhoods that have been struck by Shiitization, which has come to control the minds of uneducated people. This includes the songs that chant the love of the family of the Prophet that echo from inside houses and from passing cars, or are repeated on the lips of young and old alike. Songs with militaristic lyrics are accompanied music that we hear in Husseiniyat alongside self-flagellation and crying.

Those supporting Shiitization in Damascus and its neighborhoods gradually introduce everything that spreads Shiism in the daily life of Syrian citizens, as we mentioned with songs, posters, and other things. This disease has reached shocking proportions, and citizens have become accustomed to it and no longer take notice of it.

Offices that aim to spread Shiism have been established in al-Amarah, and in al-Amin there is also an office that supervises missionaries who live in the neighborhood and have recently become Shia. The mission of these offices to distribute books that discuss the positive traits of the family of the Prophet, and to give monthly aid to poor families accompanied by CDs that include speeches and seminars on the Shia sect and its thought.

These offices aim to find youths who are interested in Shiism or in working with these offices, which gives them exceptional authority to cross security checkpoints and assist their activities in the social circles and institutions of the regime, in universities and colleges, and even in buying bread at bakeries!

Likewise, one youth living in al-Amarah (‘Amr B.), who rejects Shiitization, asserts: “I found myself forced to volunteer in the neighborhood’s Popular Committees [pro-regime militias] for fear that they would fabricate an accusation against me that I had refused the invitation by youths who had volunteered in our neighborhood! [But] the matter is not limited to volunteering in committees or carrying weapons to protect the neighborhood, as the officials responsible for youth volunteers claim, but things gradually escalate, as happened with me. First, I was asked about my religion and sect, and afterward an officer and a number of civilians who were in the center began trying to lure me, telling me, “We will provide a wage of 30,000 Syrian Pounds or roughly $215 to each volunteer, alongside rounds of intensive training. From among these volunteers we will choose the elite, and give those chosen training rounds in Lebanon and Iran for a month and a half, accompanied by money grants and vacation trips. Afterward, these fighters will be inserted into the ranks of battalions from Iraq and Lebanon or with the Syrian army! I did not understand what they were saying at first! But I did what I could, saying that I could not travel, and that I will just remain in the neighborhood’s committees.”

This youth is just one example of stories that have happened with many of the neighborhood’s inhabitants, who groan under the control of the regime and its militias, which spread Shiism.

The International Center for Defending Human Rights and Freedoms published a report on June 6 which noted details about a number of Shia units that fight on the side of the regime, which enter Syria under a number of possible names. The report indicated that the number of Shia fighters is nearly 25,000, distributed within 24 units.

An increasing number of unemployed youths with criminal backgrounds and others who suffer from poverty and marginalization are accepted into Popular Committees. You find them called to enlist with their peers who have volunteered in Popular Committees and who are, essentially, extensions of these militias established by the regime. All of this is part of a plan by the regime, which freed thousands of prisoners and gave them general amnesty in exchange for their enlisting in its ranks. But those who have volunteered are not those who left prison. Most are minorities that have been terrified by the regime, since it claims that they are targeted and threatened by the Other. Likewise, we know that our Syrian society suffers from high unemployment, especially among youths who search out the security of dignified work. This has forced some of them to volunteer in exchange for monthly wages, thinking that their work would administrative and within their neighborhoods… They then find themselves in the situation that they are now in, including cheap acts of looting, pillaging, and theft from their brothers.

Aside from al-Amara, there are other areas in Damascus which show the phenomenon of Shiitization, including:

Al-Salihiyyah, which is inhabited by a Sunni majority with a mixture of old Shia families and others who moved there as this phenomenon accelerated. Likewise, al-Jizymatiyyeh al-Meidani, and al-Jourrah, some of the regions in old al-Mazzah, and al-Mazzah 86 which is famous for its Alawite majority, most of whom work with the regime and help in the Shiitization campaign inside and outside the neighborhood. Masakin Barzat al-Hayy also includes a large proportion of Shia Iraqis, some of whom either fight alongside the regime or are under its command in all things. In old and new al-Zahirah, this plan has proceeded under the command of “the shabihah of Nisrin street,” which is famous for its blind loyalty to the regime and for it's Alawite majority. Most of its inhabitants are volunteers in the security services or the army.

The other remote regions, which have seen high rates of immigration because of war and insecurity elsewhere, are pressed under the weight of Shiitization in a lived way – meaning that they see, hear, and are exposed to theft at the hands of the shabeeha. In these areas, if Shiitization is not direct, it is present in the street before the eyes and in the ears of these areas’ inhabitants. This has almost made them acclimated to these conditions. Those most influenced are the children and adolescents whom we see in the streets joining gangs with sectarian slogans, and as we said before, they repeat religious songs, even in the schools, and they compete to download songs, praises, and latamiyyat [Shia songs mourning the death of Ali] on their phones… It is a great tragedy since these sectarian ideas have gained control over the minds of this rising Syrian generation.

The Madar al-Youm website reported that a Syrian activist who left Damascus several days ago said that the militias that support the regime militarily are losing what remains of their popular support, especially among the minorities which they claim to protect.

The activist added that the days of Ashoura were hell in Damascus, and that conditions in the city were almost like an open announcement of Iranian colonialism, since it was possible for a group of Iranian women to gather in the Bab Toumah square and raise the yellow flag and the Iranian flag in all safety, while a Damascene woman was unable to show her cross, and had to talk of the Virgin Mary in secret.

The activist interviewed by Madar al-Youm said that latimiyyat songs are repeated in the city even now. She digressed, saying that "We started to miss Ali Aldeek [an Alawite singer who is popular in the coastal region but not in Damascus],” pushing those loyal to the regime to be disgusted at its silence over these practices.

There are many reports that have been published via documentation institutions on the issue of freedoms and human rights with the help of activists from inside Syria and coordination groups that archive these events in Syria. These include the al-Jazeera Net center and articles written in the al-‘Asr journal and the International Institute for Syrian Studies. Likewise, there are studies from the Syrian Movement for Justice and Building, not to mention YouTube videos that show thousands of instances [of Shiitization] in these regions.

As for the countryside of Damascus, there are other stories beginning at the Sayyidah Zeinab shrine, Iran’s third most important center after Najaf and Qom in the Arab nation for spreading Shiism, and continuing to the Adra region and al-Tal and Damascus’ other rural areas. This will be the subject of the next article.