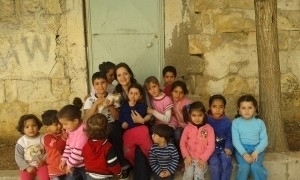 In an old house in the Turkish city of Gaziantep visitors are greeted by children’s laughter.

Their joy belies the tragedies they witnessed before they left Syria.

In the kitchen, women are preparing a large quantity of pickled aubergine for other Syrian families who have recently arrived in the city.

Four Syrian families currently live here. The house is reminiscent of a home in old Damascus.

Another 16 families reside elsewhere in the city.

The homes are part of an initiative known as “Beit Olfa” which was started by Dima Hajj Darwich and her family after they fled the town of Ariha in Syria’s Idleb governorate.

The project aims to support widows and other dependents of those who have died in the Syrian civil war and crossed the border into Turkey.

Under the scheme, families who have fled the conflict and have the means to help, provide support to other refugee families. They start by introducing them to other families who live in the house and the wider neighborhood. They also support them with daily subsistence and help them get their children into local schools.

“Beit Olfa” means “Home Affinity” as the project’s intention is to foster a warm relationship between the different families living there.

The project relies on the support of Syrian families both in Gaziantep and further afield.

Only families who can prove that they have lost their breadwinner can benefit from the assistance on offer.

Dima Hajj Darwich says she does not receive any financial support from international organizations.

According to a report by the United Nations High Commissioner for Refugees (UNHCR), over 800,000 Syrian refugees have crossed over into Turkey, second only to Lebanon. After securing housing for incoming families, the project aims to help the widows find work as it can only provide families with short term support.

Although these women have little choice but to find a job there are few opportunities available to them.

Most have not worked before and did not complete their education back in Syria.

But the Beit Olfa kitchen offers an opportunity for women to prepare meals that they can then sell locally.

Uma Ahmad, a refugee from Aleppo where she lost her son, was one of those who faced this challenge.

When she first arrived in the city she began helping other women with domestic work.

But later on she started work in the Beit Olfa kitchen.

“I feel satisfied when people praise my cooking,” she said.

Others are also benefiting from the project.

Uma Rachid, a woman in her sixties, lives with her three grandchildren in one of the rooms in the house.

She fled with the children to Turkey after their father was imprisoned by the Syrian authorities and their mother was killed by sniper fire in Aleppo.

“I can’t leave my grandchildren alone and go to work, they are young and orphaned,” she said.

But through the Beit Olfa project she began working with other women in the kitchen while another family takes care of her grandchildren.

“I’m working in Olfa Kitchen so that I might be able to save some money to hire a lawyer for my son,” she said. “He was arrested by the Syrian security forces and has been in prison for two years.”

Since word of the kitchen has spread, many organizations in Gaziantep have begun placing orders.

These include the offices of al-Jazeera and the Syrian Association for the Care of Orphans. Wael al-Khaled works for the Smart News agency and he regularly orders food there.

“This is a great way to contribute to the empowerment of Syrian women in the country of asylum,” he said.

To empower an even larger number of women, Dima Hajj Darwich is now drawing up plans for a second business, the Olfa Workshop.