Syrians have no alternative but to purchase fuel from ISIS 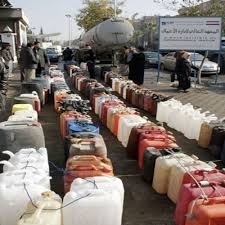 Along the highway linking Damascus and the southern city of Suweida, boys under the age of 10 sit, wearing hats and heavy winter clothing to avoid the severe cold that has come early this year.

In front of them are gallons of the black viscous liquid for sale, or "the diesel of Daesh." The phrase has been quickly adopted and is no longer considered repulsive. Car drivers that cannot get diesel fuel from government fuel stations find using this fuel is the only way they can continue to work after the government became unable to provide diesel fuel. This opened the way for traders associated with the government to gain a monopoly in fuel, reaping fortunes from the trade and leaving thousands of poor Syrian families without heating in the face of a winter that is being considered the most brutal in years.

Security men, corrupt officers, bandits and brokers oversee smuggling operations with coordination with two parties: ISIS and the regime, adding a new covert alliance to the many well-known alliances in the political field.

Trade is not limited to diesel fuel; there is a long list of other substances available along the diesel road, stretching hundreds of kilometers from the north of Syria across the desert to the south, including tobacco and electrical tools and possibly other banned substances such as weapons and drugs.

The smuggling operations on this road continue because of the difficulties faced on other smuggling routes to Lebanon, because of the existing situation and the conflict on both sides of the border, which has pushed smugglers to find other roads.

The southern highway is the alternative, adopted by the smugglers with the help of powerful officials behind them, who are able to get smuggled goods to any other region in regime-held areas without any obstacles at the regime barriers and checkpoints.

The boys wave continuously to the travelling cars to advertise their wares, including the diesel that has become like a magical liquid for Syrians. The ISIS diesel is not cheap; the smugglers exploit the people's desperation for diesel fuel, and the government's inability to supply it, imposing prices that suit them, without any competition. The government, meanwhile, has not provided fuel oil for more than a month of the cold season, and merely give promises.

The same applies to gas fuel, which is a modest substitute for diesel, already substituting electrical power for heating, which is not available. The only choice is ISIS to meet the Syrians needs.

This substance continues to be smuggled publicly, and until today not one arrest has been recorded of a person involved in the smuggling operations, nor has there been any serious investigation into how such large amounts of diesel fuel arrives, suggesting those who want to continue the work of gangs also oversee the trade and protect it.