Pain and injustice turned to hatred, desire for revenge, and extremism 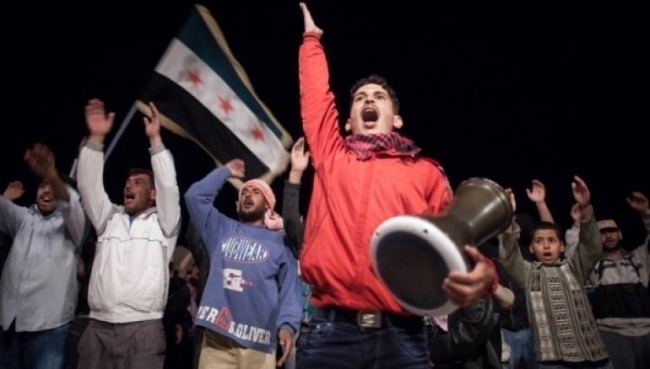 In 2012, when the Syrian regime bombed Baba Amr, the whole world watched silently. Then when the regime slaughtered the children of Houla, the world kept silent, as it continued to throughout all Assad’s crimes against Syrians.

It was within that context that the Islamic State of Iraq and Syria (ISIS) started to slowly grow deep inside the Syrian community, where the feeling of pain and injustice turned to hatred and a desire for revenge, then to desperation and eventually hatred towards the entire world.

All that led to create merciless men, extreme in their religion and beliefs to seek revenge from the world that did nothing to ease their pain and suffering, just watched silently.

When the foreign jihadists entered Syria, they gave those desperate merciless men the ability and the means to seek their  revenge, where they became organized and trained in all kinds of killing, including the cutting off of heads the easiest way.

All that took place while the world stood watching these crimes alongside the Syrian regime’s unprecedented crimes, leading to the creation of more and more men finding in extremism a solution to take revenge for their lost dignity and honor.

It is common sense, really. Imagine that you are the handsome young man who loves and enjoys life, and you suddenly find your father dead in the detention centre as a result of torture, and all you get from the regime is a death certificate showing "heart attack" as the cause of death; then you witness tears, fear and pain in your mother’s eyes. After that your brother is killed by regime rockets, followed by your wife’s and two daughter’s running away abroad seeking refuge in any country where you cannot reach them; then your friend’s leg is amputated, and another relative disappears. After all that, you open the television, you see Walid al-Muallem, the Syrian Foreign Minister, talking about human rights, and Bashar al-Assad talking about resistance against the universal conspiracy.

Amid all your pain, and with the world still watching on, and you are blamed if you agreed to swear allegiance to ISIS, which offers you the money, food and arms to avenge yourself and help ISIS achieve its goals in return. That is an option that would be easily accepted by many Syrians who found their lives torn apart and their future destroyed, in front of the eyes of the whole world, which did nothing but silently watch.

The Syrian regime knows all that, and has worked hard to reach to the current situation. The brutal and heavy killing had double benefits: getting rid of rebels, and turning people into extremists and terrorists to be killed again, either by itself or via the U.S.-led international alliance. Their relatives then turned into terrorists, and so on, leading the Syrian revolution to become what they always claimed was a  "revolution of terrorists".

I will relate a real incident which shows who really started cutting people's heads off in the Syrian revolution. A trusted person told me that he saw in his own eyes a rebel's head hanged on a pole at a checkpoint for the Syrian regime in Homs, while his body was thrown aside for the sniper to practice on shooting. The eyewitness said that the head kept hanging until the visit of the international team to Homs, when it was taken off and thrown in the nearest rubbish bin.

In the beginning of the Syrian revolution, the Syrian regime sent dozens of so-called "average terrorists" to join demonstrations in their short white ankle-height Abayas, white head cap and long beards, exactly –  if not better –  than they look in the Egyptian films. Then they were filmed to broadcast at the Syrian official channels. That is the way to create the image of terrorists among simple innocent people.