Before the uprising, there was the possibility for women to claim their rights through the courts, although they sometimes had to wait up to 10 years for the case to conclude 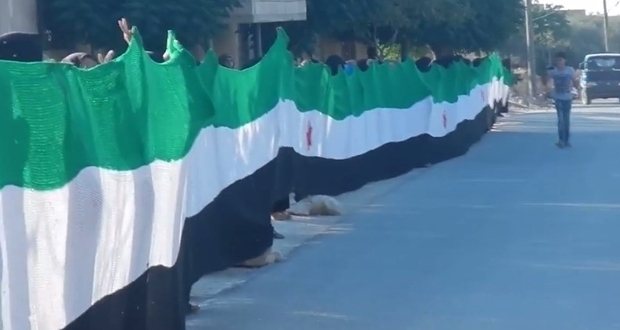 As families struggle to survive the ongoing civil war in Syria, women’s chances of inheriting from their parents are diminishing.

Amal was displaced to Kafr Nabel in Syria’s northwest with her husband and children because of the current security situation. She and her family began to rely on humanitarian aid to survive.

“I am in dire need of money, but my father denied my sisters and myself our Islamic right to inheritance and gave everything to our brothers,” she said.

Her father says that Amal’s husband is a stranger and that they do not give money to strangers.

It is difficult for Amal to claim her right to inheritance within the context of the uprising.

“There are no working governmental courts, and the Sharia courts are a failure,” she explained.

Nizar Burghol, a lawyer, explained that fathers often refuse their daughters their rightful inheritance due to their own greed, as well as fear of their money and property being transferred to their daughters’ husbands. He also said women struggled to claim what was theirs, even if they went to court.

Before the uprising, there was the possibility for women to claim their rights through the courts, although they sometimes had to wait up to 10 years for the case to conclude.

“Legally speaking, a woman cannot claim her rights because she does not have enough power to do so,” Burghol said.

Now, however, in the absence of formal courts, women cannot claim their inheritance unless they resort to Sharia courts. In this case, they may receive symbolic compensation but not the full amount owed to them.

“At this point, Sharia courts are the only remedy in the face of the closed mindedness of men in Kafr Nabel and the surrounding areas,” said Burghol. According to him, only around 5 per cent of women have been able to claim their rights through a process of reconciliation or by force, while 95 per cent were unsuccessful.

Stories like Amal’s are increasingly common in Kafr Nabel, as well as in other cities in Syria.

Abu Kareem refused his daughters their inheritance, justifying his actions by claiming that the only right girls have in his or their husbands’ house is their food and drink.

“My father did the same. These are our traditions,” he said.

Abu Kareem left his money to his sons. Today, he regrets having done so since they abandoned him during a time when he needed medical care.

“My shyness and my parent’s suppression prevented me from asking for my inheritance, so it went to my brothers,” said Samira, Abu Kareem’s daughter.

She gets angry whenever she remembers her father’s injustice towards her. Her brothers cut off contact with her so she could not ask them to give back what was rightfully hers. Even if she were to bring a legal case against them, nothing would likely come of it.

From his pulpit in the mosque, Sheikh Mohammad Hameed explained the necessity of giving daughters their rights. He called on women who have been denied their share of their family’s inheritance to file complaints with the Sharia courts.

“The violation of rights is prohibited in Islamic law,” he said. He believes that men’s greed makes them covet what is rightfully their sisters’ or daughters’.

Sheikh Hameed recounted a story about a man who married two women, but gave his second wife and her children most of his wealth, while the first wife received very little. The first wife filed a complaint with the Sharia court, which ruled this division of property was unlawful. However, when the court tried to implement the decision, the second wife’s children began issuing threats. The court did not dare proceed, which demonstrates that the Sharia courts are unable to implement their own decisions.

The Sheikh suggested Islamic-based solutions for this crisis. “There are awareness-raising solutions, such as offering guidance from the mosque pulpit,” he said, since this forms the basis of a preacher’s work. It will take a long time for people to adopt new behaviour in this regard. The Sheikh drew upon a Koranic verse in Surat Al-Nisaa’a that exhorts people to give women their inheritance: “Allah commands you as regards your children’s (inheritance); to the male, a portion equal to that of two females.”

“Amal and Samira are victims of a patriarchal society, victims of their families, of norms, traditions, and greed,” said Ghalia al-Rahhal, the director of the Mazaya Center, a local non-profit organization that offers vocational skills training to women. “Sharia courts won’t help either of them or anyone else to claim their right to inheritance. The only solution is for women to stand in solidarity with one another and work together.”