ISIS’ approach to imposing its dictates is based on step-by-step policy. Before implementing any declaration, Sharia statement, or new law, ISIS releases rumors to the people in such a manner as was practiced in ancient times 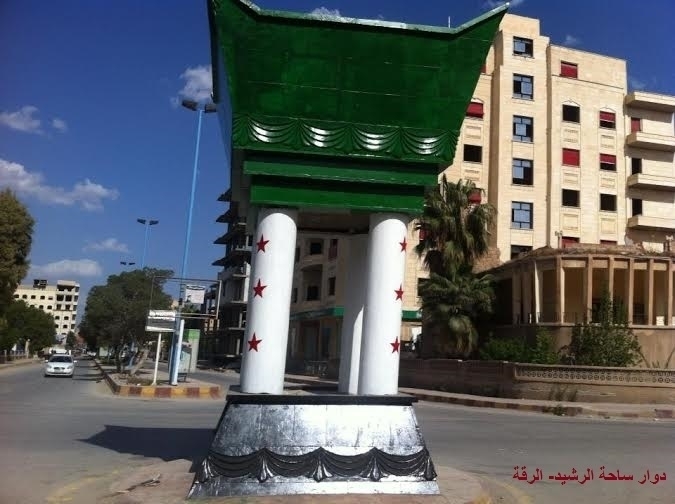 They forbid smoking, force men to grow their bears, and make women veil their faces. They are the soldiers of the Islamic State in Iraq and Syria, which recently gained the nickname “Daish, or “ISIS.” They perform these actions to achieve the organization’s goals, relying on security measures to impose ISIS’ declarations and Sharia rules in the areas under its control.

ISIS’ approach to imposing its dictates is based on step-by-step policy. Before implementing any declaration, Sharia statement, or new law, ISIS releases rumors to the people in such a manner as was practiced in ancient times.

The population or “common people” are not in a position to voice their opinions, but are forced to adhere to ISIS’ laws and Sharia. The organization usually commits its violations – torture, lashings, crucifixion, and executions – openly, in public squares. Moreover, ISIS’ kidnapping of media activists, doctors and civilians has pushed the vast majority to flee ISIS territory in fear of suffering the same fate as their colleagues.

“ISIS is the sole, unchallenged authority in Raqqa,” according to a media activist who recently fled the city after receiving threats. He asked not to be identified, or for a pseudonym to be used. He went on, explaining that in pursuit of its ambitions, the organization did a good job of exploiting the existing demography, such as the weakness of the tribal leaders who pledged allegiance to whoever was in control over the area, beginning with the Syrian regime, then the Free Syrian Army, and recently ISIS. He continued, “ISIS has established an office that deals with clan and tribal affairs, which has exploited the loyalty of some influential tribal members. The office is ostensibly an independent organization, but in fact it is just a branch of ISIS’ security apparatus, which aims to assert the organization’s control over everyone residing in its territory.”

As for the situation in Raqqa city today, the media activist, in an exclusive interview with Kulina Shuraka’ (“We are all partners”), said that ”Raqqa is in the worst condition it has ever experienced, especially its infrastructure, such as electricity, water, etc. It is very bad, and is in a totally different category than other Syrian cities. The city (which is adjacent to the Euphrates and a dam) has never before been in such a poor condition.”

Since ISIS took control of the city, it has followed a policy of trying to establish a so-called “caliphate state” by changing government titles. For instance, the word “office” is used instead of “institution,” and the General Electricity Company has become the “Office of Electricity.” The organization’s jihadists have also painted buildings in black and covered them with its black flags.

This is the situation in Raqqa, which the regime lost control over on March 5 of last year. ISIS gained control over the city following the withdrawal of the Free Sham Movement and Al- Nusra Front’s militiamen from Raqqa at the end of September 2013. According to the activist, “ISIS was then on the ground with the rest of the factions and battalions of the Free Syrian Army. However, it gained full control over the city after the declaration of the Islamic State in Raqqa, i.e., one year later. Then, every memory and hope the city held following liberation became nothing”.

The activist went further: ”ISIS tries to convince the majority that it is applying the Islamic Sharia, while in fact it pursues its own plans, distorting Islamic religious texts to favor its own interests and needs. This is perhaps ISIS’ most terrible and dangerous practice.” The activist concluded by saying, “Raqqa today is the most radical, terroristic place. Despite our attempts to deny the bitter reality, Raqqa is the successor of the Kandahar of yesterday. This truth is obvious.”

The Office of Accountability and Khansa

The state or emirate of Raqqa became the headquarters of what is called the “Islamic State of Iraq and Syria,” or ISIS. The walls of main streets are full of banners and graffiti calling on the population to comply with Sharia laws as interpreted by this extremist state. Most former government offices have become ISIS offices.

Of all the offices, the Office of Accountability has the most direct contact with the people. It performs random arrests and raids, and has become the main source of people’s fear. This office has patrols monitoring people in the streets, ensuring that none of the laws it has imposed are violated. These laws cover adherence to the Islamic Sharia’s restrictions on women’ s dress, preventing people from smoking cigarettes and hookah, forbidding women from walking in the streets alone (meaning unaccompanied by male relatives such as sons, brothers, fathers or husbands), and forcing shopkeepers to close their shops to go pray at the appropriate time.

The organization has also created the ”al-Khansa battalion,” whose membership is limited to women. Its task is to monitor women, determining if any woman is wearing make-up or clothes that violate Sharia dress code. Some activists note that at the beginning of the school year, one inspection raid ended with the arrest of 10 female students of a secondary school. The arrest was performed by members of the battalion on the pretext that the students were wearing veils that did not comply with the Sharia, and that the students were wearing make-up under their veils. The battalion also arrested two girls from the city, claiming they had removed their veils. The girls were each sentenced to 30 lashes.

(H.N.) is a woman who is more than 40 years old and has decided to stay in the city with husband and family. “I would rather live at their mercy than flee and live at the mercy of a tent,” she said. She explained to Kulina Shuraka’ that “The citizens of the city are of divided loyalty. Some say that the situation is much better, while others say that the situation is worse than before. Some say that their life was much better under the regime’s rule, since there were no shortages then.”

(H.E.) argued, and her husband agreed, that ISIS “is doing everything the wrong way. We are not convinced. They pretend to follow the religion’s rules, but if we look to our religion and our Prophetic Sunna, we can see that all what they are doing is wrong and contrary to the real rules of the Islamic religion.” She confirmed that the organization “has forgotten everything but women’s rights and the veil,” citing examples from history proving that the women at the time of the Prophet worked with men and participated with them in their battles by nursing the wounded and preparing food for fighters.

(H.E.) is afraid to live under the organization’s laws and terror. She expressed her fears, saying that she had ”never read in the history of Islam that people were crucified in such brutal ways. For our whole lifetime, [Syria’s] sects and communities lived together in peace. If they are really convinced in their beliefs, why do they flee when the coalition’s airplanes fly over the city, and why they rush to escape their headquarters?” she said, clearly referring to ISIS members’ attempts to escape the international coalition’s air raids on ISIS’ headquarters in Syria and Iraq, which have taken place for the past four months.

In the center of downtown Raqqa, above the governance’s building, a black flag has been raised on the highest pole. This is ISIS’ flag and banner.

When the call for prayers is heard, the city’s population rushes to the closest mosque to pray. Shopkeepers must close their shops and attend group prayers. According to activists, the organization has imposed laws on the city’s population dating back to the Middle Ages. A man who uses the Arabic acronym “Daish” to refer to ISIS will receive 70 lashes for each use. Women are prohibited from wearing jeans and sweaters, and must wear Islamic clothes and cover their faces with a veil or burqa. Shopkeepers are prohibited from displaying women’s underwear in the storefronts, and those who sell it must be women. Women’s tailor workshops must be closed if a male is present, women are forbidden from visiting male doctors for treatment, and girls are not allowed to sit on chairs because word “chair” in Arabic is masculine.

Men are not in a better situation than women – they are prohibited from smoking cigarettes and hookahs in cafes and public places, and men’s barber shops have closed because the organization is has forbidden modern haircuts and the use of hair products.

Imposing the Jizya on Christians

ISIS’ practices have affected not only Muslims, but also followers of other religions, as a jizya has been imposed on Christians. According to ISIS, the jizya stipulates that ”Christians must pay for each rich male four golden dinars [ISIS’s new currency], half of that for males of moderate income, and one Dinar for each poor Christian male.” This treaty, issued at the beginning of this year, is called the “first protection contract between the Islamic State in Iraq and al-Sham and the Christians of Raqqa city." The text also stipulates that Christians ”not build any new monastery, church, or priest’s hermitage in the city or its environs, and not repair what has been damaged,” ”not display crosses or any of their books in Muslims’ roads or markets,” and “not use loudspeakers during their prayers and other worship.”

In an interview with Kulina Shuraka’, activist Suad Nawfal explained that “ISIS’ game with the jizya is obvious and will not impact coexistence at all, because it is alien to the Syrian social fabric, and moreover because Christians in Raqqa are too few – the vast majority of them abandoned the city after ISIS occupied [the city’s] churches at the end of September 2013.”

On 26 September 2013, ISIS fighters lowered the cross of the Church of the Lady of the Annunciation, but this action was rejected from the city’s activists. With a group of activists, Su’ad Nawfal led a demonstration protesting this deplorable event. Demonstrators carried the cross and tried to reinstall it inside the church.

Nawfal told Kulina Shuraka’ that the reasons for her departure from Raqqa are that she is now “followed and wanted by both daish and the regime, and that my blood is in danger of being spilled because I have rejected what the Islamic State has done, including its occupation of churches and its theft of the province’s valuables, in cooperation with other armed groups.”

Su’ad describes ISIS control on Raqqa as an “occupation”, and continues: “For one year, ISIS has provided nothing but more arrests, abductions, harassment, executions, the narrowing of freedom, and bothering people – especially women – by issuing decrees that God never gave the authority for.”

·         Christians will not build a new church, monastery, or priest’s hermitage, nor renew those that are damaged.

·         Christians will not display a cross or their religious books in the streets or markets where Muslims are, and will not use loudspeakers when performing their prayers or acts of worships.

·         Christians will not carry out any acts of aggression against the “Islamic State,” such as harboring spies or persons wanted for justice or punishment, Christian or others, nor will they help those in hiding, travelling, or otherwise. If Christians discover any conspiracy against Muslims, they must report it.

·         Christians will commit to not display anything or worship outside of their churches.

·         Christians will not prevent any of their number from converting to Islam.

·         Christians will respect Islam and Muslims, and will not voice any doubts about Islam.