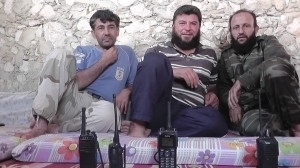 “Al-Qusayr to Kafr Nabel, do you hear me? Over,” said Mohammad al-Akel as he tried to get through to members of an observer network set up by supporters of the Syrian opposition in Jabal al-Zawiya in the north of the country.

Akel was a member of a group of revolutionaries in Kafr Nabel that supported opposition forces in the battle of Al-Qusayr in the governorate of Homs in 2013.

Since the beginning of the civil war in Syria, supporters of the uprising have sought to monitor the movements of the regime forces. Many people began carrying handheld radios and became part of a network of “observatories” who provided information to the armed opposition.

“After the uprising became military in nature we found it difficult to attack regime checkpoints in the cities and villages of the southern Idleb suburbs,” Waheed al-Husny, an observatory in the north of the country, told Damascus Bureau.

“We had to find methods of communication for commanders in the Free Syrian Army control rooms and medical teams. We established a network of trusted observatories to help connect battle commanders to each other.”

Several observers in southern Idleb province in Syria’s northwest communicate with each other using special frequencies on handheld radios.

Each observer carries a two-way radio that can intercept the frequencies of government fighter jets as they prepare to carry out air raids. When an observer identifies a potential target for attack he or she communicates it both to the rebel forces and to civilians so that they can take shelter.

Abdelrazzak Sultan, who used to be an English teacher before the civil war, is now an observer.

“I intercepted the communications of the regime army and relayed them to our fighters so they could dodge attacks,” he said. “After the regime’s brutality increased in February 2013 we began warning civilians of air strikes so they could take cover in safe places.”

Civilians have praised the work of observers who have been able to give them advance warning of attacks.

“When the regime begins shelling we can avoid getting hit because the observers warn us,” said construction worker Rami al-Mahrouq.

“When planes take off from the airport we know where they are headed because of the observers.”

Husny’s 12-year-old son is pleased with his father’s monitoring of the conflict.

“I like the observatory’s work because they save many children’s lives, he said.

“When the regime shells the cities my father sends warnings to civilians to go into shelters.”

Ahmad al-Nahar is the field commander of the Fursan al-Haq Brigade, which is part of the Free Syrian Army (FSA), in the southern Idleb suburbs. He explained that, besides warning of imminent attacks, the observatories also help identify casualties.

“On the battlefield the role of the observers is to reveal the movements of the regime’s heavy armaments that are difficult for fighters to track and to communicate their findings to the control room,” said Nahar. “They also assist in rescuing the injured during battle through their ability to communicate with ambulance teams and field commanders.”

“Observers act as compasses to direct opposition fighter squads by monitoring the movements of the regime forces,” he added.

While the observatory network has had its successes it has not been without problems.

Sultan said that the network “accomplished huge things with simple equipment” but also noted several challenges in monitoring the movements of regime forces and predicting attacks.

“We do face some difficulties due to the simplicity of our equipment and the lack of financial support,” he said.

“Observers travel by motorcycle and cars. Few of them receive any assistance for gas expenditures.”

Another challenge is ensuring that observers provide accurate information and that messages are not intercepted by the regime.

“The observers sometimes spread false news to raise the morale of civilians,” said Qadro al-Hameedo, who used to work as a policeman in Kafr Nabel but defected from the regime after the opposition took control of the city. “Others who support the regime try to jam the communications of the observatories which leads to panic among civilians when they stop receiving news from the battlefield.”

Husny attributes the spread of false news reports to those who lack experience.

“If they hear something they relay it to civilians even if it is false, which leads to low morale among both civilians and fighters on the fronts,” he said.