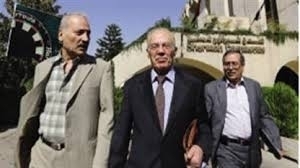 Most opposition blocs in addition to some military factions have agreed on a “roadmap to save Syria”. This roadmap is supposed to be a reference used during the negotiations with the regime delegation in “Moscow 1” which will be held between January 26 and 29. This document does not refer to anything related to President Bashar al-Assad prior to the negotiations, which must not last for more than three months, and should reflect an international- regional understanding that would result in an international decision under the sixth chapter which include spreading supervisors in the area.

The document, which “Al-Hayat” had received, suggested forming transitional institutions including “a transitional government” that has the authorities of the president and the prime minister as stipulated by in the current constitution. It also suggested the formation of a “military council” from both sides, to reconstruct the security agencies and remerge the dissidents with the Syrian army to fight “the Islamic State” organization “ISIS”, in addition to new constitutional principles that recognize the Kurdish component and an administrative decentralization.

Munzer Khaddam, the spokesman of the “ Coordination Body”, told Al-Hayat that the parties that had approved this “ roadmap” included the 12 parties of the “Coordination Body”, the “ Free Patriots Gathering” – which includes 23 political and armed factions-, the “ Democrats Union” and the “ Syrian National Coalition”. It also included the “ Liberation and Change Front”, the parties of self-administration formed by the “ Democratic Kurdish Union” and “ Cordoba Group” which had recently formed a political bloc. He pointed out that two committees were formed to prepare for the opposition meeting in Cairo, which will be held in January 21, and 22.

The “Coalition” had presented a document during the “Geneva conference” last February that resembles this roadmap as they both had not mentioned Assad, yet the coalition’s document concentrated in its 24 points on a “transitional government” which would be considered the “only legit body that expresses the sovereignty and independence of the Syrian state”.

The government delegation hadn’t listened to the “Coalition” proposal back then, as they were concentrating on the priority to “fight terrorism “and the sequential execution of the “Geneva statement”. The document stated that the transitional government should “have all the executive authorities over the state institutions including the security and intelligence agencies, the armed forces and the police”. All negotiations must lead to a “settlement” that is considered a “constitutional declaration” and that the transitional government along with UN supervisors should oversee a “full cease of fire and should take immediate actions to stop the violence, protect the civilians and stabilize the country”. The transitional government should also have the authority to “take decisions that would lead to force all foreign militias out of Syria”.

On the other hand, the “ Roadmap to save Syria” saw in its 11 pages that “ due to the regime’s insistence of using a military solution rather than a national dialogue, and due to the hesitation of the international community to resolve the Syrian crises, the struggle has lasted for a long time, and Syria became an international struggle field. There is nothing left to win and Syria and the Syrians are the biggest losers”. It also pointed out that the “military solution is hopeless” and negotiations are the “only way to save Syria”. Negotiations between the regime and the opposition, with the presence of members of the civil community must take place under the supervision of the UN and some international and regional countries – to engage influential parts. The two delegations must have “full authorities to negotiate and agree’’, and the negotiations must start with the Geneva statement and the Security Council decisions. The roadmap talked about the necessity of choosing a “place for negotiations” that both parts agree on, and to set a clear schedule and mechanism to apply the decisions. The permanent members of the Security Council and an international decision under the sixth chapter should guarantee this.

The roadmap also included the “main features” of the desired political regime. It should be a democratic regime that represents the army, the police and the security forces – the only parts allowed carrying arms. In addition to that, “trust-building measures” must be taken during the negotiations period that include “stopping the armed conflict”, demanding all “foreign groups and members who fight for both sides to leave the country immediately”. It also included the return of all civilians and activists to Syria “without any security accountability”, the immediate release of all detained people and the cancelation of “all the decisions of the terrorism court” that were taken after 2011. The roadmap also mentioned that “once the conflict has stopped, and negotiations have shown some progress, all the armed militias of both sides should be gathered in special camps while negotiating the reconstruction of the army and the security forces. This would be overseen by the same committee assigned to oversee the freezing of the conflict under the supervision of the UN and its supervisors.

The roadmap also included a preposition of “the transitional period institutions” that included a formation of a “national council” from the opposition, “parts of the regime” and members of the civil community. This council aims to “legalize and provide censorship over the transitional government”, to set a national covenant for Syria and a temporary constitution, and to agree on the arrangements needed to transform into a democratic regime. In addition to a “transitional supreme judicial body” formed from independent judges.

The document suggested that a “transitional government” should be formed from the opposition, the regime and the civil community. This government should have the “full authorities granted to the president and the prime minister as stipulated by the current constitution”. It should handle the consecutive administration and it should announce upon formation that its goal is to set a democratic, pluralistic deliberative regime. In addition to that, a “temporary military council should be formed 50/50 from “the Syrian army officers and dissident officers who believe in the political solution”. All military factions must work under the command of this council that in turn works under the commands of the transitional government. All army factions must be ordered to leave the cities, and then, the process of merging all armed factions in one army must start and the problem of the armed civilians on both sides must be solved. This army must contribute in the international alliance to fight ISIS and any other militias that ally with it or reject the political solution and keep on fighting.

About the “presidential institution” during the transitional period, the document pointed out that the two delegations must negotiate “the presidential institution, its authorities and its occupants. It also suggested the formation of a “transitional consultative body’’, a “national reconciliation committee” and “transitional period basic procedures” that include “suspending the current constitution”, “separating Al-Baath party from all institutions including the army and the security forces” and “reconstructing the police forces”. The actions related to reconstructing the security forces and organizing its duties – according to the constitution principles attached to the document – must be completed. A reconstruction schedule must be set, and a conference for the donors must be held. A team will be formed to write the draft of the new constitution that would be approved by the transitional national council and then there would be a constitutional referendum, under UN supervision. The transitional period must end in “public local, legislative and presidential fair elections that must be supervised internationally. The parts who approved this document prefer if the election cycle for all institutions was set for four years only.

The document called on the UN envoy to negotiate the formation of the two delegations and demanded the presence of representatives of the permanent members of the Security Council, Turkey, Iran, Egypt, Saudi Arabia, Iraq, Jordan, and the EU. At the same time, they called on the international countries to work with the regional countries to put an explanation to the “Geneva statement” and to issue this explanation through an international decision under the sixth chapter, and to issue another decision to cease fire and a third to prevent sending weapons to the conflict sides during the transitional period.

The document also included “General principles for the constitution” which say that “Syrians are all the same”, “they are free and sovereign at home” and they are the only source of legitimacy for all levels of governance. In addition to that, it mentioned that “the state recognizes the Kurdish component and their national rights, and considers them to be an integral part of the Syrian people”.  The institutions of governance must be established through “periodic elections and separation of powers”. This constitution must recognize the “democratic parliamentary pluralistic regime” and it considers the “ Syrian army” the national institution that protects the country and its independence and sovereignty over its land, protects the national security, and doesn’t interfere in politics. This constitution also calls for an “administrative decentralization“.

Some 75 people from the “coalition” and the “Coordination Body” are scheduled to have a meeting in Cairo to approve the “Cairo declaration”.  The "Muslim Brotherhood” and “Damascus declaration group” are excluded. This was after announcing the names of the new presidential body members of the coalition at the end of the general assembly meeting in Istanbul. The “Coordination Body” is holding meetings in the UAE to prepare for the Cairo meeting.