Um Maher was killed by a rocket from a government fighter jet in Kfar Nabl’s city center on August 28, 2012. Her body was never found and she was only identified after her purse was discovered near the spot where she was killed 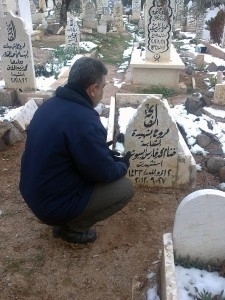 Abu Maher knows that his wife’s grave only contains a purse but he continues to visit it every day.

When he is there he feels the presence of her soul and he talks to her as if she were right there with him.

Um Maher was killed by a rocket from a government fighter jet in Kfar Nabl’s city center on August 28, 2012. Her body was never found and she was only identified after her purse was discovered near the spot where she was killed.

It was decided that the purse should be buried in what has come to be known in the city as the “martyr’s graveyard”.

While visiting graves has always been common practice for Syrians, remembering the dead in this way has become a more frequent activity since the start of the armed conflict in 2011.

“The prophet, peace be upon him, encouraged us to visit graves so that we may remember our mortality and repent, work hard, remember the afterlife, and pray for the dead because they are in need of supplication. Visiting graves is a religious requirement,” said Dafer al-Issa, a local sheikh.

In Kfar Nabel, burying the dead is governed by certain regulations to meet standards that are acceptable to different sects of Islam. For example, ornate tombstones and built tombs are forbidden. A tombstone should not exceed one third of an arm’s length, or approximately 30 centimetres. It should also be no higher than that. The stone usually bears the name of the deceased and the date they died however further writing is discouraged.

“We may add the word 'martyr' on the condition that it is followed by the words 'God willing',” said Sheikh Abu Amara al-Shami, a Salafi imam at one of Kfar Nabl’s mosques.

Kfar Nabl has a population of about 30,000 and has been outside government control since August 2012. When the city was under government control its council was responsible for the upkeep of the graveyards, ensuring they were well lit and maintaining the paths. But since the start of the conflict there has been no one to maintain them so local residents do what they can.

According to Issa, there are four graveyards in Kfar Nabl. Since the regime forces entered the city on July 4, 2011, the number of graves has increased, particularly in the southern graveyard which has come to be known as the “martyr’s graveyard.”

“There are no security checkpoints on the way, so families have taken to burying their dead there,” explained Issa. “Visitors have also increased since the city was first targeted.”

An air raid on the city on September 27, 2012, killed 19-year-old university student Khitam al-Bayoush. Since then, her father has been visiting his daughter’s grave every morning.

“I meet with many others like me in the graveyard,” Mohammad al-Bayoush said. “We are all the victims of one criminal who robbed us of what is dearest to us. There is one positive thing about the graveyards: they have transformed into meeting places for the families of martyrs who have been killed since the regime forces came and left more than two-and-a-half years ago.”

“Many of our conversations revolve around discussing the pilots who carry out the air raids, what the regime gains from killing innocent people and destroying homes, and why it doesn’t target fighters,” he added. “We also talk about the people we lost, who they were, what they used to do.”

Ahmad was killed by the Syrian Army as he was hiding in an orchard.

“They killed him in cold blood,” said his 51-year-old mother, who now looks after the children Ahmad left behind.

“Since then I have been visiting his grave constantly. My duties towards his father and siblings prevent me from going there daily, so I visit every Friday. His children live with me now, and it helps ease the pain of our separation.”

Dr. Sami al-Bayoush, 54, only used to go to the graveyard to attend burials, and when he had to, for example to mark religious festivals like Eid Al-Fitr and Eid A-Adha. But since he buried his son he visits frequently.

“My son Mohammad, 22, was arrested for no reason from the university where he studies medicine and was tortured to death along with two of his friends nine months later,” he said. “I now visit his grave daily with his mother before each of us heads to work. He was our bright light, extinguished by the brutality of the regime. The graveyard is now a space for us to be at ease and cry freely without shame.”