All of this violence and oppression pushed the other side to resort to armed confrontation to defend itself and its possessions, which had become spoils for the regime’s military and militias as they conquered civilian areas under the justification of combatting armed groups 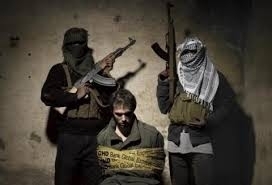 Dangerous phenomena emerged alongside the Syrian revolution. The most dangerous of these was the social violence that emerged from the country’s political violence, leading to the division of large swathes of Syrian society because of the war on the ground. This worsened until it became more dangerous than could be imagined. The first goal of this violence was certainly political, and it was put in motion by agents of the Syrian regime as part of a premeditated plan. Other kidnappings then occurred as a result of chaos and the lack of security and stability.

At the beginning of the revolution, armed violence by the Syrian regime and its militias, known as “National Defense Forces” led to the emergence of a dangerous phenomenon that the Syrian people had never before experienced: kidnapping emerged most clearly in the middle of 2012, and has persisted until now. It has weakened the Syrian people on both sides – supporters and opponents – of the Syrian regime.

The continual violence employed by the regime and its intelligence apparatuses against the Syrian opposition – which began at the same time as the popular mobilization that demanded the most basic of rights – was accompanied by the official regime media’s continuous accusation that the opposition was using weapons against civilians and policemen. The regime did this to exacerbate the conflict and turn it into an armed struggle against the state. This led the Syrian street to erupt into an uprising against the regime which was, in reality, the perpetrator of this violence, which the regime did naturally and without ethical or humanitarian compunction.

All of this violence and oppression pushed the other side to resort to armed confrontation to defend itself and its possessions, which had become spoils for the regime’s military and militias as they conquered civilian areas under the justification of combatting armed groups.

These factors spawned many phenomena, including that of kidnapping, after the regime let its followers loose and allowed them, individually or as a group, to do as they pleased with civilians.

Kidnapping was, in the beginning, intended to force the regime to exchange soldiers for individuals from areas under Free Syrian Army control. But this phenomenon evolved into other forms of kidnapping, which began to be performed for monetary gain, personal revenge, or sectarian feuding – which the regime exploits. Most of it was intended to terrify the inhabitants of the regions under regime control.

In Damascus, for instance, the phenomenon of kidnapping became common in a number of areas including Hayy al-Zahra, Maydan, Hay Nahr ‘Aisha, Tadhamun, Thawrah Street, and Barakmah, in the center of the capital, Damascus. A report published by Al-Arabiya News on September 24, 2012, titled “Kidnapping Expands in Syria and Young Women are the Greatest Victims” noted that most acts of kidnapping targeted young women, especially in religiously conservative areas. There, the families of the kidnapped quickly try to meet the kidnappers’ demands, fearing for the life of the kidnapped and the social scandal they face. The ransom is massive, and families cannot easily afford it.

In most cases, kidnappers claim to the families of the kidnapped that they are members of the Free Syrian Army. These groups of kidnappers are made up of individuals with criminal records that have been expunged by regime loyalists, or who are directly connected to the regime.

Most cases of kidnapping target young women, and especially students as they leave or return to schools and universities. Kidnapping takes place in the light of day and within view and ear-shot of pedestrians. Yet no one is able to do anything for fear of the kidnappers’ weapons, which they use to threaten anyone who comes close. Most kidnappers use public transit vehicles to disguise and ease the kidnapping operation.

In a conversation with Arabi21, Kareem al-Shami, an activist in the Media Office in Damascus, discussed a kidnapping attempt that occurred some time ago in Hayy al-Jizmattiyeh square by armed men wearing military uniform and driving a security vehicle. They harassed a woman who was walking in the street, and attempted to force her to get into the car, but miraculously, the woman fled and was able to escape. This happened in front of the eyes of the store owners and pedestrians, but witnesses could not do anything to stop the kidnapping, for fear of the fighters’ response.

In a similar incident, well-known to some, which was reported by Al-Arabiya, a young woman, Rama al-‘Asas, was abducted from her home in Damascus after an ambush was set for her on August 27, 2012. Four individuals entered her house, three of them in military uniform and the fourth in civilian clothes. They looted the home and threatened those inside, then left with her and placed her in the trunk of the car. Eventually, they gave her family a ransom demand. The young woman’s family paid, hoping for her to return safely, but Rama has still not returned and there is no news about her. Her family is deeply afraid for her life. It should be noted that Rama was one of the first participants in the peaceful mobilization in Syria, and that she was working in the field of humanitarianism and relief.

The varieties of kidnapping happening in Syria have multiplied, diversified, and proliferated. For each type, kidnapping operations are no longer limited to enticement or trickery. They are now characterized by the impersonation of a security official by gangs of bandits and individuals with criminal histories who, in the middle of the day, storm markets to execute their kidnapping operations. They claim that the target is wanted by the state, and employ a ready-made charge such as terrorism or acting against the interest of the nation.

Some security officials are not innocent of this phenomenon. They work for their own personal interest and execute kidnapping operations in addition to theft and sexual assault against the victim. Some victims of kidnapping are killed if their families do not pay the ransom. Some have their ransom paid, but nevertheless end up as a corpse thrown into one of the streets at the edges of the city or in a garden.

Amidst the ongoing struggle between the regime and its allies on the one hand, and the armed opposition groups in all their varieties on the other, the phenomenon of kidnapping has spread to such an extent that it returns and affects the civilian and military supporters of the regime.

Some Alawites, Christians, and other minorities who act as observers of what is happening in their country have also confronted this phenomenon. The regime plays this card to incite society against the majority that is rising up against the regime. Cases of kidnapping have been recorded amongst many of these minorities. This places their families and communities in the scene painted for them from the beginning: the terrorism of armed gangs emerging from the revolutionary street.

Kidnapping in Syria is not limited to the forces of the regime and its militias and volunteers, such as the National Defense and foreign fighters. Syria’s chaos has been exploited by radical Islamist groups, who have also kidnapped civilian activists and some of the inhabitants of the regions upon which these radical Islamists have imposed their influence, with the aim of total control, in addition to political and monetary gains.