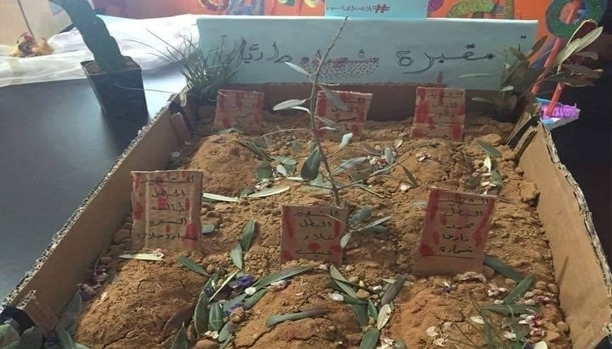 Unlike children from other parts of the world, the lives and dreams of Syrian children have turned into deprivation, alienation and death, as they only wish for real graves for their fathers and mothers.

Adnan Mazhar ash-Sheikh Rajab is a Syrian refugee in Lebanon, he is 11 years old and he is from the city of Daraya in the western countryside of Damascus. Adnan created an artwork in the refugee camp he currently lives in, but his painting was unlike the paintings of other children in the camp. Adnan’s artwork depicted the graves of the martyrs – one of them for his father, while others belong to martyrs from Daraya who died under torture inside the regime's prisons; their corpses still unaccounted for.

Whoever inspects the small cemetery will realize the premature awareness of the harsh realities of life that Syrian children face, as Adnan has colored the tombstones with red spots, a reference to the blood spilled in order to maintain Assad’s power.

Adnan added the word "hero" to "martyr" on each tombstone; he is aware that those who sacrificed their lives for their homeland are heroes. Is there any child in the world who is Adnan's age that can differentiate between the martyr and the hero, the right and the wrong, except for Syrian children?