I encouraged my son to take part in the revolution. I wanted him to experience this moment of liberation, and to rebel against everything that had been imposed on us under Hafez al-Assad 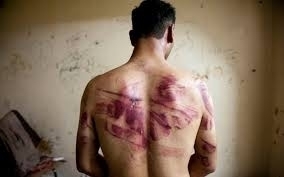 I don’t know how my son Samih, a medical student, got his hands on a camera the size and shape of a small button. He put it on his shirt and went to the town square on that fateful day, July 6, 2011. He knew that a demonstration was planned after Friday prayers and he wanted to film it.

To tell the truth, I encouraged my son to take part in the revolution. I wanted him to experience this moment of liberation, and to rebel against everything that had been imposed on us under former president Hafez al-Assad.

Our families had long taught us that we should remain silent and that cowardice meant safety. Since I had been a staunch critic of the transfer of power from the father Hafez to the son Bashar al-Assad, I saw the revolution as our chance to escape from slavery.

Before Samih made his way to the square, we agreed that he would meet me at my friend’s place in Baghdad Street at around 5 pm so that we could make our way home to Harasta together.

I had no inkling that I would not see my son again for 22 days.

I waited for him at my friend’s house, but he did not come. I called his mobile phone over and over again, but of course it was turned off. I came up with a thousand explanations for why he was late. Maybe his car had broken down, or maybe he had gone somewhere with friends. I did not dare admit to myself the only logical reason for the delay. I waited at my friend’s until 9 pm that evening, refusing to even entertain the possibility that he had been arrested. That night was a sad and depressing one.

Three days later, a young man named Ahmad called to tell me my son had been detained by the Palestine Branch [ed. military intelligence section that used to handle Palestinian paramilitaries].

I was shocked – the Palestine Branch? The worst stories came from there! He said the security forces surrounded them on the day of the demonstration. Samih was standing some distance away, oblivious of what was going on. But one of the officers thought Samih looked suspicious and discovered that he was wearing a button camera, so they rounded him up along with the others and took them in.

Luckily for Ahmad, he was only 17-years-old. At the start of the uprising, the regime detained those under 20 for a maximum of three days. Samih told Ahmad to contact us when he got out, although I don’t know how he was able to remember our phone number after all the verbal abuse and beatings.

Two days after Ahmad called me and five days after Samih disappeared, a friendly woman named Dua knocked on our door. She told me her son Kanan was a 19-year-old architecture student who had taken part in Friday’s demonstration. He had been arrested and severely beaten. Since he lived in Harasta, too, Samih gave him my address and phone number. Kanan had remembered the approximate location of our house but had forgotten the phone number, so Dua spent three hours looking for our home until she found it.

I did not know what to do. We are ordinary people, and we don’t have connections with powerful people. But a mother’s instinct to protect her child is stronger than anything else.

I eventually found the Palestine Branch, and I visited that sinister place repeatedly during Samih’s detention.

I was received in an external room where a senior officer, a large, dark man from Hama, sat together with another man whose rank I didn’t know, but who had an accent from the coastal region.

After a lengthy talk about how the young men they arrested had taken hallucinogenic pills and had each been paid 500 Syrian pounds to demonstrate on the streets, they allowed me to see my son.

I know it’s hard to believe, but that is what happened.

They brought Samih in. I will never forget how he looked, his head drooping, his shoes unlaced and his hair unkempt. He raised his sallow face to look at me. I stepped forwards to hug him but I was worried I might hurt him.

I whispered, “Did they beat you?”

“No,” he replied. “Please don’t cry. I don’t want to look vulnerable in front of them.”

I did as he asked and held myself together.

The visit lasted only 10 minutes. As soon as I stepped outside, I burst into floods of tears. I was haunted by guilt – how could I leave and not take him with me? How could I breathe fresh air while he was suffocating inside? I felt as if I was not a mother, but rather a monster who had left her own flesh and blood with people who knew no mercy. Why didn’t I break down the walls? Why? All pointless questions to which there were no answers.

I don’t even know how the days passed. Over the next 22 days, I visited the Palestine Branch nine times, but each time they refused to admit me. I was left outside like a helpless, angry idiot.

Every Monday and Thursday, I went to the Palace of Justice in Hijaz next to the Hamidiyya Market, waiting along with tens of others. Detainees were taken there either to be released or to be transferred to Adra Central Prison.

For 22 nights, I waited for a knock on the door, thinking that they might release him at night.

For 22 days, his pyjamas and underwear lay folded neatly on his bed. When he finally returned, I wanted him to know I had been waiting for him for all those days.

Then, on Friday July 27, I received a call telling me that my son would be transferred to the Palace of Justice the next day. I don’t know who the caller was, and to be honest I didn’t want to know. Maybe it was mother’s intuition, but I believed him, even though it seemed strange as Saturday is not a working day.

I was there at 8 am. The place was empty except for a few unfortunate souls like me. I waited for two hours, and finally security service buses filled with detainees began arriving from various branches. The white Palestine Branch bus pulled up, its windows covered with netting. I saw 30 people chained together, my son Samih among them.

They were brought before a judge, who asked them whether they had been at the demonstration. All of them denied this and were set free.

I didn’t care what had happened. The important thing was that Samih was with me again, and life could return to a house that had come to resemble a cemetery without him.

I took him home and he found his pyjamas and personal effects waiting for him on his bed. I wanted to feed my son and make up for the hunger he lived through. Samih was free, so I was happy despite the hardship all around us.

Our ordeal was not over though. Samih was arrested a second time on April 28, 2013.

Two years on, I am still looking for him. I have not found him yet, and no one has contacted me. I know nothing of Samih, my only son, and nothing about which security agency arrested him. I am still waiting.