Volunteers provide escape for Douma's children over Eid, rebuilding one of the city's war-torn playgrounds with unexploded missile parts 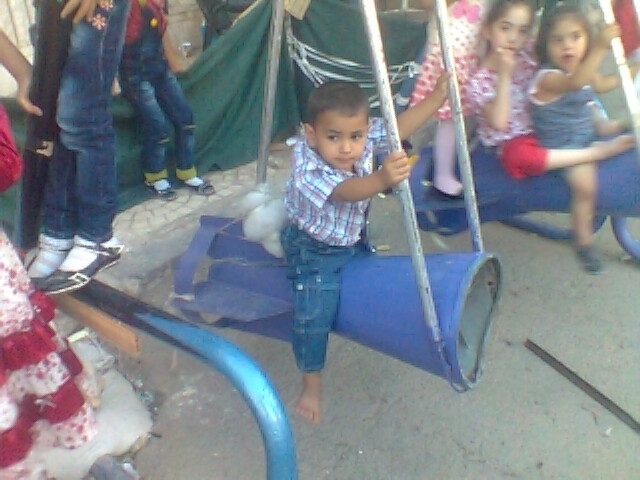 To celebrate the holiday of Eid al-Fitr, children of the besieged city of Douma gathered at Toyor al-Janna amusement park to play amongst the recycled missiles dropped on the countryside of Damascus by the regime’s air force.

Gathering around the rides as they waited eagerly for their turn, children’s faces radiated with happiness and delight, as they witnessed the rebirth of their destroyed park.

"I am so happy this Eid, as I haven't ridden a swing or a roundabout since our amusement park was destroyed," said Thabit, a local child.

Abu Ammar, the park’s architect, explained: "Douma has been targeted with many kinds of weapons for four years now, including mortars, missiles, explosive barrels, but some of these missiles failed to explode, leaving only holes in the ground.”

"The regime’s missiles have killed many innocent civilians. But we took those that did not explode, emptied them of their explosives and kept them, to be used as rides for children after the only amusement park in the city was destroyed by the continuous bombing," added Abu Ammar.

Asked if he fears the amusement park will be targeted in the future, Abu Ammar pointed to the equipment, exclaiming, "these things aren't human beings, they are merely metal, and we will build them again."

The arrival of Eid helped relieve the embattled city of its pains, even if only temporarily, as children, women and elders – dressed in their finest clothes – journeyed to the local cemetery to pay their respects to Douma’s martyrs.

"My heart aches, as I could not afford to buy new clothes for my son, Jamal," Abu Wael explained, attempting to conceal his tears, "but we were able to find a way to manage. We gave him his brother's clothes, which were barely worn because he was killed in this war."

"I am afraid of playing with these missiles," said one girl, silently observing the other children as they played amongst the recycled military equipment. It was later revealed that similar missile had struck her house, killing her mother and brother inside.

Park volunteer Mahmoud said: "The children have nothing to do with this filthy war. It has deprived them of their childhood and they are the ones who have lost the most. They should have the right to play and enjoy their youth. It is their right, and it is our job to do all we can to give that to them.”

These recycled missiles – which killed, displaced and orphaned many of Douma’s children – have replaced the city’s fears with delight. "Children deserve to live, not die. That is why we decided to change these tools of death into a symbol of life," Abu Ammar said.