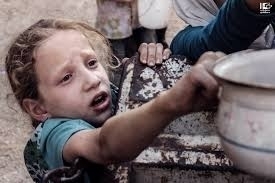 When people live under a strict siege for over four years, like those in Eastern Ghouta and Douma in particular, their only goal becomes finding just a small piece of bread to escape starvation, which is the most horrible way to die. They may lose their minds and even the ability to cry when they see that even the rare aid that does reach them is being sold by merchants of war at prices they cannot afford.

Tawfeek, a 20-year-old man from Douma, said “we are the ones who are suffering all kinds of shelling and facing various kinds of weapons—in addition to the siege imposed by the regime— simply because we asked for our rights and refused humiliation and submission to the tyrant Bashar and his gang. Therefore, it is unacceptable to watch the humanitarian aid sent to us vanish into thin air and appear a few months later as boxes from the Red Crescent (Ramadan aid) and sold for 4,000 Syrian pounds each.” Tawfeek was wounded during the shelling of Douma when shrapnel got lodged in his chest. According to a doctor, it was impossible to remove the shrapnel without endangering his life, so it remained in his chest.

Under the pretext of preventing the terrorist groups from taking the aid, the regime rarely allows aid to enter the cities in Eastern Ghouta. The rare aid [that does reach the area] is being stolen in many neighborhoods in Douma. Abo Ahmed, who refused to tell us his profession, said that, “this happens not only in Douma, but also in all of the cities of Eastern Ghouta. Once aid enters the city, certain people take it. Most of the time they hide it to sell later just below the market rate.”

When asked about the content of the aid boxes, and who is behind their theft, he answered that “Each one contains 1/2kg of sugar, 1 kg of flour,