"Systematic shelling by Syrian regime forces, large numbers of patients, and the lack of doctors and medical equipment have made the situation impossible to handle" 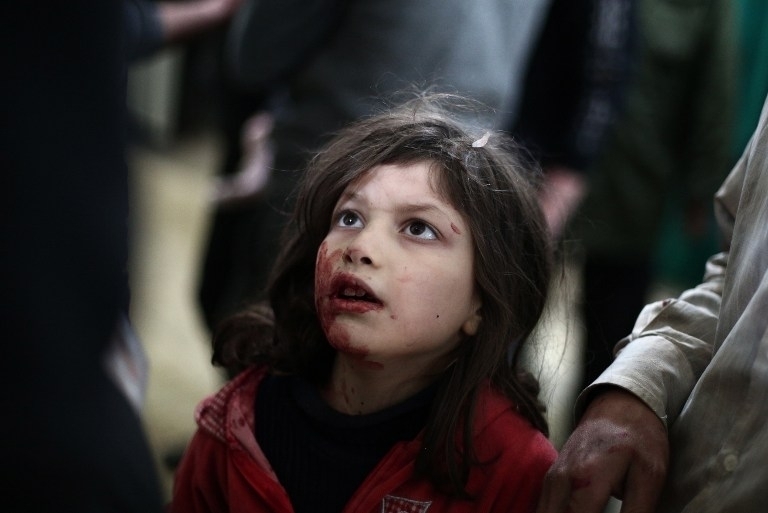 Ravaged by endless regime bombing and a crippling three-year blockade, residents of Eastern Ghouta have been forced to devise new ways to break the siege in order to survive. Access to medical care is dwindling amid acute shortages of drugs, equipment and doctors, further complicating their already dire living conditions. Survivors here know well that death visits this place often, laying claim to their weakened bodies and hopes for a better life.

"There are no hospitals within the city of Douma,” says Abu Ahmed, “only medical points lacking everything, including doctors. People who treat the injured at those points – which have no medicine or equipment – are not certified doctors."

No longer strong enough to stand without a wooden walking stick, Abu Ahmed was injured when his small shop was bombed in a Syrian regime air raid, leaving dozens dead and hundreds more injured.

“If those injured had received the necessary medical care, many of them would have managed to avoid permanent disability. Doctors in the medical point could not do anything for us. Unfortunately, those who received treatment in these medical points end up either in the cemetery or, at best, in a wheelchair," Abu Ahmed sighed.

When the regime’s siege and bombing of Eastern Ghouta intensified, Douma’s upper class, including its doctors, chose to leave the stink of blood and memories of death.

"Physicians who had homes or clinics in Eastern Ghouta sold their possessions and left in order to save the lives of their families, after some of them had trained volunteers with no medical certificate or experience in the field. The training was limited on certain things, like injections, stitching wounds and providing first aid," emergency worker Abu Shadi says.

"A small number of doctors stayed in the city of Douma – and we extend our gratitude for their great efforts – but the severity of the systematic shelling by Syrian regime forces on the city, the large numbers of patients, and the lack of medical equipment made the situation impossible to handle. We do not want anything from the Syrian regime, we just want it to allow people with serious injuries to receive immediate treatment in Damascus, which is only a matter of minutes away," Abu Shadi added.

Injuries from bomb shrapnel often carry fatal consequences inside Eastern Ghouta, as victims rarely receive appropriate treatment and must be transferred to a hospital in the capital, but the siege imposed on the city prevents access to outside facilities.

Abu Hamza, 25, left law school a year after the outbreak of the revolution. He was recently injured by shrapnel following an air raid by Syrian regime warplanes. Abu Hamza’s left eye was hit, causing serious injury, and was immediately taken by his father to medical point No. 1.

"The medical point is a cellar that lacks sufficient medical equipment," said Abu Hamza. "The doctor there conducted a simple examination, and realized that the injury was serious and that I would have to undergo eye surgery in a specialized hospital outside the city of Douma," Abu Hamza explained.

"Five days passed while my father was trying hard to find a road to take us out of the city, but he could not – all the roads were blocked. Someone told us that we might be able to use the road to the town of Harasta," added Abu Hamza.

His father travelled immediately toward Harasta, spending seven hours exploring the possible roads to take his son to a hospital outside Eastern Ghouta. He even pleaded with a regime soldier on the outskirts of Harasta to let him pass, but his appeal was met with barrage of bullets fired into the air.

Eventually, a local smuggler told Abu Hamza’s father he could take out his injured son, only under escort, for $1,500 each.

"This was the amount that we had to pay to get out of Eastern Ghouta towards Damascus. It costs more than the price of the surgery itself, which we were originally unable to pay," says Abu Hamza, whose left eye is now permanently impaired.