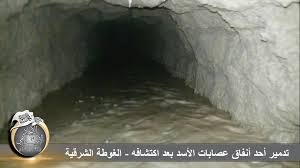 Life in Ghouta is different from life in other areas and neighborhoods of Damascus that are just a few kilometers away. The lack of professional opportunities in the towns of Ghouta and the shelling and siege by the regime forces continuing for over three years have made life there very difficult, forcing its male population to engage in an exceedingly hard and dangerous job – digging tunnels. Digging tunnels in Ghouta and especially the city of Douma has become a day job for most men there, who receive fees that can barely buy a kilo of flour.

“Tunnels could collapse on the workers inside, which happened often in the beginning. Nowadays, a bigger risk is to encounter regime soldiers or members of the security service who are also digging their own tunnels,” said Abu Mahmoud, a man from Douma.

Men of Douma work in three shifts a day to finish their job, using primitive tools. “Each worker has one meal – either breakfast with an egg and a piece of bread, or lunch with rice and bread. The digging never stops. When we hit a large rock or anything like it, we turn on the generator and use a jackhammer,” said Abdullah, a tunnel digger. When asked about the reason that men take this job and whether it pays well, Abdullah said: “Many have lost their job because of the ongoing war, so we have no means to earn money to buy food. Prices are also very high because of the prolonged siege. They pay around 1,000 Syrian pounds per worker, which covers the price of a kilo of flour.”

These tunnels are used as a way to bomb and seize advanced military installations and to break the stranglehold by the Syrian regime. “They (the tunnels) are also used to smuggle medical supplies and food,” stated a rebel who wished to remain anonymous. “We also conduct operations called ‘counter-digging’ when we learn that the regime is digging tunnels in the vicinity. What we do is to dig a tunnel to search for theirs and then sabotage it.”

The rebel described digging tunnels as not just a job but as a legitimate defensive measure to break the regime’s siege on his hometown of Douma. It is his own way to face an army backed by sectarian militias, warplanes, and explosive barrels that do not distinguish between civilians and combatants. According to Abu Mahmoud, it is also his own way of confronting an army that has a huge arsenal of sophisticated weaponry such as missiles and chemical weapons – an army that did not hesitate to use such weapons against civilians of Ghouta and massacred more than 1,200 people in August 2012.

Abu Mahmoud lost a hand while heading to Zamalka the day following the chemical attack, making him unable to carry out his job of digging tunnels. He therefore became a supervisor overseeing the operations, not only in Douma but in the whole Ghouta area. “When we first started digging tunnels, we faced many difficulties; however, we found solutions and continued the operation. For example, we pumped oxygen at certain points inside the tunnels, which is very important for the workers. We also set up pillars inside the tunnel to prevent them from collapsing over the workers, which had happened often earlier, and killed and trapped many workers for many hours before we could rescue them,” said Abu Mahmoud.

“The real danger was unexpectedly encountering regime forces digging their own tunnels. One time, we heard a loud noise above us while digging a tunnel. We stepped back and suddenly a large digging machine appeared, which the regime usually uses to dig tunnels ahead of us. It looks like a giant bullet and we call it a ‘drill bit’. This machine had rapidly unearthed the tunnel, so we filled it with dynamite and ran away.” Abu Mahmoud smiled while he recalled this story in an optimistic tone. “Even if the regime closes all of the sewers in Damascus, we will still be able to dig a tunnel into the Republican Palace and save the people from where all those mass killings were planned and conducted.”