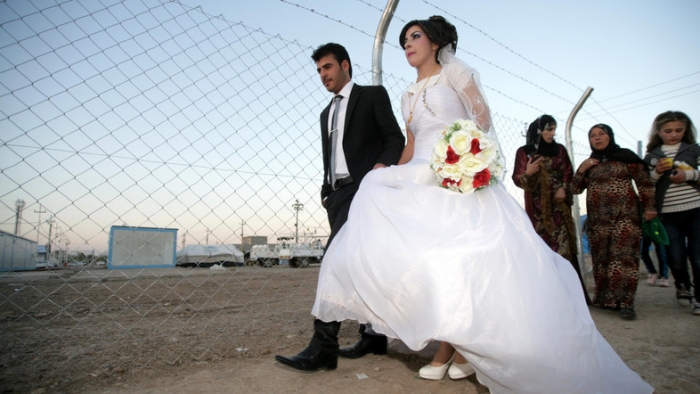 "I paid over 150,000 Syrian pounds to bring my son, Tahseen, back into Ghouta. He was so happy, he took good care of me and even suggested that I find myself a wife to help me and to take care of my house, because my late wife and little son died over a year ago," said Abu Tahseen from Douma in the Damascus countryside.

Sometimes, even war can offer a reason to marry. After more than four and a half years of conflict in Syria, cities and towns — especially those controlled by the opposition — have witnessed an increase in widows and orphans due to the daily death, which has left thousands of casualties in Damascus’ Ghouta region alone. It is hard to find a family there that has not lost a member to this war.

The marriage bureau in Douma handles cases for residents who wish to find a partner. It is overseen by the "Shoura (consultation) office” of the Army of Islam, a major rebel group that controls the city. The marriage bureau was established by 50-year-old Om Abdullah six months ago after she dedicated herself to the idea of helping others to marry.

"The bureau aims to encourage people to get married, to start small families and live a normal life, despite the siege and the difficult conditions that all the towns of Ghouta are experiencing," said Om Abdullah, the association’s manager.

"Many families have lost their breadwinners and other crucial members, like fathers and mothers. The bureau is trying to solve this problem and its priority is to encourage men to marry, even divorced women or widows who have lost their husbands in this war," she said.

Om Abdullah explained the way the bureau works to help both men and women: "Women usually come with their guardians or family members, but sometimes they may come alone — especially if they have lost all their family members. They give us all the information we require about themselves and their families so we can provide the information to men who wish to get married.”

When asked what people thought of the association and whether it gave financial support for those who wanted to marry, Om Abdullah smiled and said: "I think that the people here are pleased with our job, which I think is appreciated in Ghouta in general, and especially in Douma. As for the financial support, some exists but it is not significant, as we try to help people to get married without having to pay a lot of money."

"After being imprisoned for two and a half years, my son Tahseen was released, and he immediately tried to get in touch with me. I couldn't believe that I was going to see my son again!" said Abu Tahseen, a Douma man who was remarried through the bureau.

But Tahseen didn’t yet know about the death that had split his family apart. “I didn't know what I was going to tell him,” sad his father, “I couldn't tell him that his mother and little brother had died during a raid that targeted my house while I was at the shop where I used to work."

When Tahseen was released from the regime's prisons, he was allowed to return to Ghouta after paying a large sum of money. He found his father, tired and exhausted, working at the shop and doing the usual housework. “Tahseen took the news well and took good care of me. He even thought of finding me a wife when he heard of the marriage bureau that had just opened in Douma".

He tried with his friends to rebuild the house, especially the room that was destroyed following the raid that killed his mother and little brother almost year ago. "I tried to rebuild the house with my friends, and when I heard about the marriage bureau I was able to convince my father to find a wife to take care of him and the house," said Tahseen.

"We went to the association to look at the names of many women who also wanted to find a husband. About a month later, my father met a 35-year old widow, whose husband had passed away inside one of the regime's prisons."