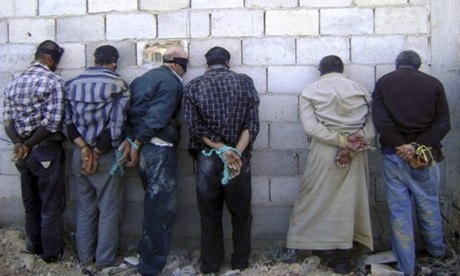 At a time when hundreds of thousands of inmates in Syrian regime prisons are suffering from every kind of human rights violation, their mothers, fathers, spouses and siblings are also suffering as they try to secure their release, or at least confirm that they are alive — and they are paying dearly as well.

Exploiting the readiness of prisoners’ families to do anything to save their loved ones, those known today as “brokers” are systematically blackmailing and robbing families of huge amounts of money in exchange for news of the detainee. Over the last five years, the number of brokers has increased and their methods have developed alongside the increase in the number of prisoners and kidnapped people.

The blackmailing and brokerage operations are performed by lawyers, officers or ordinary people who claim to know where the prisoners are and have the ability to release them in exchange for large sums of money. The issue has escalated to the point of private offices being established in the capital Damascus, working secretly, and claiming to be able to locate prisoners and secure their release, citing their links to the responsible security agencies.

One of the regime checkpoints in Damascus arrested the husband of Umm Ammar when he was returning from work, and she heard nothing about him since. She continued to go to the military police station in Qaboun to find out where he was arrested and check on him, but to no avail.

She says: “I heard from my neighbor about this office and went to register at it to find out where my husband was. After I gave them the requested information they demanded $2,000. I gave it to them after they promised to inform me of his whereabouts within days. I waited a week and received no response. When I went back to them they told me he was accused of supporting the Free Syrian Army and that he would be put on trial within a month.”

Umm Ammar adds: “Every time I asked them about my husband’s fate and how I could help him, they demanded more money. A drowning man will grasp at straws, and I paid to ease my conscience, until the military police office came to me with a paper proving my husband’s death. It said he had died of bacterial poisoning, and they forced me to sign a paper confirming that. I was a victim of the lies and deception of those people who exploited my weakness and my desire to help my husband without there being any way to prosecute them or hold them to account.”

Activists say that the regime authorities are turning a blind eye to the scams which families of prisoners are subjected to by the brokers and their mediators, who work to expand the charge against the prisoner to suggest that they cannot be released from prison without paying a large sum, in order to earn money in some form or another. This is considered a new and important source of income for officers and allies, ensuring their loyalty. But the biggest tragedy falls upon the families of prisoners who, after paying huge sums, are surprised by news that their loved ones have died under torture.