She had heard stories of how detained girls were often raped. She hugged her daughter closely and they both wept 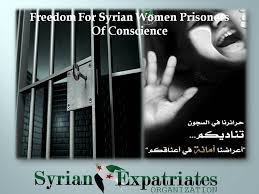 Her name is Abeer. She is from Maarat al-Numan, and this is the story of the torment she suffered while detained by the Syrian government.

Abeer was in her final year at Aleppo’s College of Nursing. She was looking forward to graduating and starting a job that would see her caring for the sick.

Her life changed in 2013 when her father defected from the army.

“After witnessing the army’s savagery and cruelty towards its own people, my father defected and joined the Free Syria Army [FSA]. I had no idea this would lead to my arrest as I attempted to cross a checkpoint one day.

“I was on my way to Aleppo to sit my final exams when they detained me and transferred me to a prison in Aleppo.

“The sound of people being tortured filled the building; it travelled well beyond the walls. Jailers used metal rods to burn girls’ bodies. They would tie up their hands and suspend them from the ceiling, then beat them.”

Abeer said she was interrogated repeatedly. Her jailers asked her for information about her father and the opposition faction he served. They wanted names and locations so they could arrest them.

Abeer told them she did not have this information.

They poured cold water over her. They beat her over and over again. They subjected her to psychological torture.

She refused to give in, and insisted she did not have the information.

One of the jailors raped her.

She wished she were dead. She had a mental breakdown and was taken to hospital where she lost consciousness.

“After I was discharged from hospital they put me in solitary confinement. There was hardly any oxygen in my cell. I stayed there for several days crying over what had happened to me, praying to God to alleviate my suffering.”

Three months later, the government issued a general amnesty and Abeer was one of the prisoners who were released. She felt she could not go back to Maarat al-Numan and chose to go and live with her aunt in Aleppo’s countryside.

“Abeer suffered a complete breakdown,” her aunt Umm Wael told Damascus Bureau. “I did all I could to comfort her, but in vain. She pleaded with me not to tell her family she was alive. She wanted me to tell them she had died under torture. She felt she could not face them after what had happened to her.

“I told her she was a victim, and tried to convince her that she had no hand in what had happened to her.”

Umm Wael tried to convince Abeer to contact her family, but her niece begged her not to do so.

“My father is a proud man,” Abeer recalled. “I didn’t want him to be humiliated because of me. My mother is not in good health and I didn’t want her to shed tears of grief over what had happened to me.

“I felt suffocated and wished I would die. Only death would bring me relief.”

Umm Wael knew Abeer’s parents were in agony, not knowing anything about the fate of their daughter. Despite Abeer’s pleas, her aunt got in touch with them.

The reunion was emotional. Abeer’s mother took one look at her daughter and realised what had happened. She had heard stories of how detained girls were often raped. She hugged her daughter closely and they both wept.

Abeer’s mother took her daughter back home. She told Damascus Bureau about her daughter’s new life.

“My daughter was released from prison only to imprison herself in her own room. We live in a conservative society, where customs and traditions can suffocate a girl who has been exposed to something damaging to her reputation.”

Abeer’s father eventually managed to break down his daughter’s defences. He told her to let the past be, and persuaded her to go out and live her life by pursuing her career in nursing.

He also promised her that he would avenge her.

“My comrades and I will keep on fighting till we draw out last breaths to avenge the blood of the innocent and restore our honour and dignity,” he told Damascus Bureau.

Abeer emerged from her isolation, vowing to support the opposition in their mission to rid the Syrian people of the criminals who tortured and killed them.

She began working in medical centres and field hospitals, caring for wounded opposition fighters and civilians. She also joined a number of women’s aid associations where she teaches nursing skills to women.

“Every honourable man in this world must endeavour to rid Syrians of this regime that mercilessly rapes, tortures and murders the innocent,” she said.

“I call upon the world to stand by us and help us destroy this regime that arrogantly tramples over our dead bodies.”

Sonia al-Ali is the pseudonym of a Damascus Bureau contributor from Maarat al-Numan. The 33 year-old holds a BA in Arabic Literature and works as a teacher. She is married with four children.

This feature story was republished by The Syrian Observer at a special agreement with Damascus Bureau.