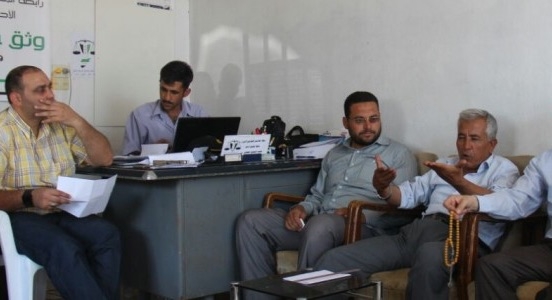 When Anas Arbo from the village of Jarjanaz in Idleb’s countryside bought a plot of land, he went to the Free Syrian Lawyers Association (FSLA) in Maarat al-Numan to register his property.

“I registered the sale and purchase contract at the FSLA documentation centre to protect my rights of ownership, which is particularly important in the prevailing difficult circumstances,” the 39-year-old told Damascus Bureau.

The Maarat al-Numan documentation centre is one of many offices established by the FSLA in opposition-held towns and cities to ensure that the rights of the public are upheld.

The centres were founded after the Syrian government set up numerous checkpoints around public institutes, including civil and land registries, which led to the arrest of many opposition members attempting to visit these offices.

“This prompted a group of us who work as lawyers and legal experts to establish the civil documentation project,” the 42-year-old added.

According to Numan, FSLA civil documentation centres maintain updated records to safeguard citizens’ rights from the day they are born to the day they die.

These offices deal with contracts including sale, purchase and lease. They also deal with administrative matters related to civil and family affairs such as documenting births, deaths, marriages, divorces, separations and guardianship.

Numan said that maintaining updated records, data and statistics were essential to measuring population growth and density, and planning for social development.

“Booklets containing details of members of a family can also be issued by these centres, but passports can only be issued by immigration offices which are governed by the regime,” the 50-year-old added.

The FSLA is funded by a number of organisations supporting governance, the rule of law and empowering civil administrations. All services provided by its documentation centres are free of charge.

“We digitise records so that we can easily access accurate information related to quotas, properties and shares. We are also in the process of organising land registries and ensuring that all records are maintained properly,” said Mustafa Gharib, who works at the Maarat al-Numan documentation centre.

Ownership disputes are referred to sharia courts. Once a case is settled and a party is declared the rightful owner, their property is registered at a documentation centre.

“All our lawyers strive to achieve one goal, which is to serve the general public,” al-Numan told Damascus Bureau.

“Our only hope is that when these difficult times the people of our country are living are over, their rights will have been protected allowing them a brighter future.”

Sonia al-Ali is the pseudonym of a Damascus Bureau contributor from Maarat al-Numan. The 33-year-old holds a BA in Arabic Literature and works as a teacher. She is married with four children.