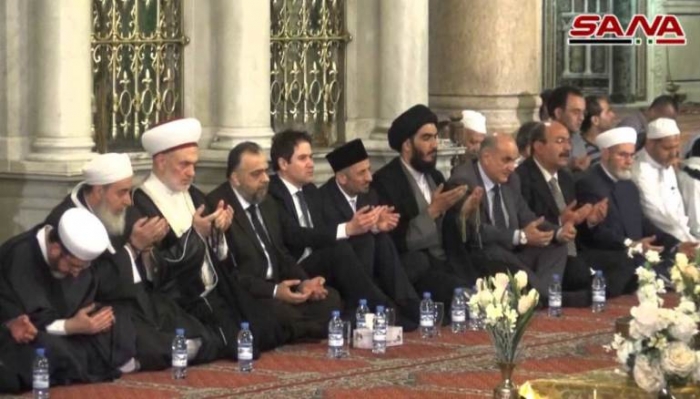 Iran has crowned its domination over the Islamic religious institutions in Syria by establishing a “coordination office” for the World Assembly for Rapprochement among Islamic Doctrines in Damascus a few weeks ago, which will be, according to Al-Modon’s sources, an operations room to define the course of religious rhetoric in Syria.

The sources said that the office will be composed of representatives from a number of Sunni Islamic institutions, most prominently, “the high Syrian institute for sharia studies,” and scholars from the Ummayad Mosque, as well as from the Sufi sect, in addition to a representative of “al-Qubaisiyet” and the Shiite seminaries in Damascus. The coordination office will be a financial fund for donations and money which is delivered from Iran to the institutions it supports, or planning for joint projects between the religious agencies the forum is composed of.

The coordination office which was established in “Iranian cultural chancellery” in the Al-Marja area in the capital Damascus and which was equipped with a library including Shiite religious texts, will be the nucleus for the assembly under the chancellery as a first step. In the second stage the coordination office will turn into a forum for an assembly independent from the chancellery, and it will be moved to a home in the coming months prepared in the Al-Ameen district, which is mostly Shiite in old Damascus.

The coordination office was established for the World Assembly for Rapprochement among Islamic Doctrines. Planning began for it in July during the visit of the General Secretary for the assembly, Ayatollah Mohsen Araki to Syria, when he met the head of the government Imad Khamis. Araki was accompanied by an assistant for international affairs in the assembly, Manouchehr Mottaki, who said that “those who are hostile to the resistance are suffering from deviation and intellectual distortion and they must be eliminated by confronting their intellectual deviations.”

The stated goals of the coordination office are rapprochement between all Islamic religious institutions in Damascus and its countryside and building a bridge between them with the aim of developing a united joint vision for religious discourse in Damascus. It has issued publications and religious texts with the aim of bringing together the Sunni and Shiite doctrines and working toward bridging the differences in ideology. This means additional dominance for Iran over all the Islamic institutions, and intervention in addressing doctrinal issues and the formula of discourse according to the policy Iran is pursuing in Syria.

The spread of Shiism in Damascus goes back to the mid-70s. The first of the missionaries advocating Shiite doctrine was Hassan Mehdi al-Shirazi, an Iraqi who had fled the regime of Saddam Hussein in 1975. Shirazi set up the first seminary in Syria near the Sayida Zainab shrine in the Damascus countryside in 1976, which is today considered one of the most important Shiite seminaries in Syria. Shirazi is credited with bringing together the Shiites and the Alawites after issuing a fatwa which said that “Alawites and Shiites are two synonymous words […] Every Shiite is an Alawite doctrinally and every Alawite is a Shiite in ideology.”

The intensified activity to spread Shiism in Syria did not flower until after Bashar al-Assad inherited power. Between 2001 and 2006, 15 seminaries were established, the most prominent of them the Al-Haydariyeh seminary and the Imam Jawed al-Tabreezi seminary, the Imam al-Sadiq seminary, in addition to the Al-Rasoul al-Azam and Imam al-Majtabi and Al-Hussein centers. The General Seminaries Directorate was then established in Damascus which began its work in 2005 as an educational authority independent from the Education and Religious Endowments Ministries. Five years after it opened, the number of students in the “al-Satt Raqiya Assembly” reached more than 5,000 men and women, including Shiites from Iran, Iraq, Lebanon, Bahrain, Yemen, Pakistan and Afghanistan.

However the public Shiite rituals did not appear in Damascus before 2005 when the first “Karbala march” appeared in the streets of Medhat Basha adjacent to the Umayyad Mosque and near the Al-Ameen district, the Shiite center of the capital.