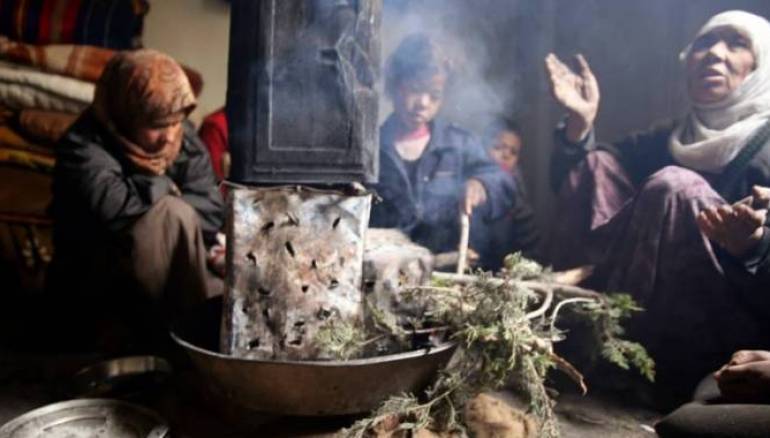 It seems that the winter in Daraa during Syria’s sixth year of revolution will be unusually hard as the harsh cold approaches early, coinciding with increasingly difficult economic conditions at a time where there is an extreme shortage in fuel and wood.

Issam, 10, says, “I shiver because of cold. The cold came early this year and we do not have any heating devices in our home so how will it be in winter?”

As he emptied garbage bags in one of the distant dumpsites, he continued: “I search for what is flammable from plastic material like cleaning cans, drinking cans and nylon bags in order to use them for cooking and heating,” he pointed out that him and his friends search his village and nearby areas to look for anything flammable regardless of its damage to the health.

He added, “We collected a lot of worn tires to use it in fireplaces because we do not have any wood or fuel and neither do we have the money to buy any.” After his father was arrested, his family has been living on what people can give from day to day.

Abou Ammar, a retired teacher, pointed out that the economic strain and lack of regular income has pushed people to use anything available in their daily lives. He said he does not consider this strange, indicating that Syrian citizens returned to primitive means during the years of the revolution which burned everything. People use means which date back to the 1950s without considering the potential damages because of the necessity and the lack of alternatives for the basic needs of daily life.

He added that the hearth and fireplace are a necessity in winter and summer for some families even though it had appeared their use was about to become extinct. He pointed out it can burn all flammable remains of tires, boxes, plastic containers, worn clothes, and animal waste after drying them.

Om Raed, a woman in her 50s, said she started mixing animal waste with dried grass to use as fuel this year because the price of wood had increased and due to the unavailability of alternative fuels in her area.

She added that she has saved thousands of Syrian pounds which she would have to borrow if she had to buy wood for fuel.