Pressure from hundreds of thousands of residents on rebel groups has forced factions to accept the regime's truce deals – including disarmament – to protect the safety of civilians, activists claim 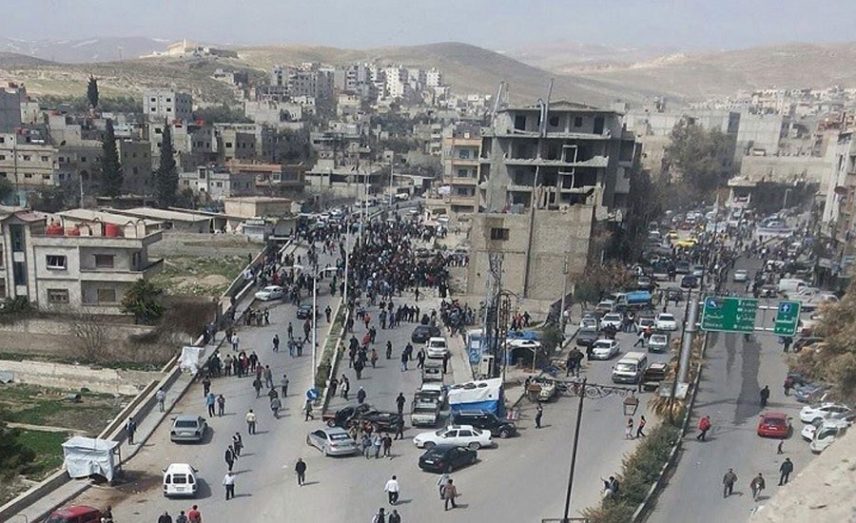 The cities and towns of the Damascus countryside are seeing swift developments as the regime moves to force most areas to sign so-called reconciliation agreements, as opposition fighters have been urged to leave these areas toward the north as the basic condition for any settlement. In accordance with this plan, the regime has forced the capitulation of Daraya, Moadhamiyat, Qudsaya, Al-Hamah, and moved toward Khan al-Sheikh and the southern districts of the capital. At the same time, regime forces are attempting to enter other areas, such as the city of Al-Tall and the towns of the eastern Ghouta, Wadi Bardi and Madaya under the pretense of these reconciliations.

After the relative calm that lasted about two years, regime forces over the last two weeks have escalated military operations against the city of Al-Tall and the northern Damascus countryside. Coinciding with air and artillery bombardment, the pro-regime Qalamoun Shield forces stormed the city from several directions after rebel groups refused to surrender it, leading to meetings between military and civilian figures in the city and regime representatives, ending with a deal between the two sides.

Media activist in Al-Tall Ahmed al-Beyanouni said that the pressure from the nearly 800,000 residents on the rebel groups in the city “forced the groups to accept the truce, to protect the safety of the civilians, especially given that the military operation launched by the regime recently had inflicted heavy losses among civilians, in addition to the long siege.”

Beyanouni added: “The deal includes surrendering all heavy weapons and fighters leaving with their light weapons. It didn’t specify a specific direction for them, but it would probably be toward Idleb and Daraa. The names of fighters who will leave the city are beginning to be recorded, while a council of 200 people from the city of Al-Tall’s residents will be formed with model citizens to preserve the city’s security and to serve as a civilian police force for the regime, which will provide them with weapons.”

These areas are connected for civilians but separated politically and militarily, and include no more than one open crossing with regime forces, which control the entry of food and the crossing of civilians. Meanwhile, the regime has taken escalatory steps to pressure a six-party committee appointed to deal with the issue of negotiations.

The regime has begun to partially close the crossings and raise taxes on the food entering by 10 to 30 percent, which an issue the popular base presses on the six-party committee.

The six-party committee depends on its negotiations with regime forces on basic points which are: not surrendering weapons, securing defectors, not pursuing those who are wanted, and preserving the lives of civilians and their property. However, the regime has rejected these points.

Media activist Mohamed al-Yassin said that these negotiations, “are nothing more than a new step toward a total demographic change of the southern districts, especially given that they are close to the Sayyida Zainab area which has become mostly Shiite – these militias are now trying to extend toward this area.”