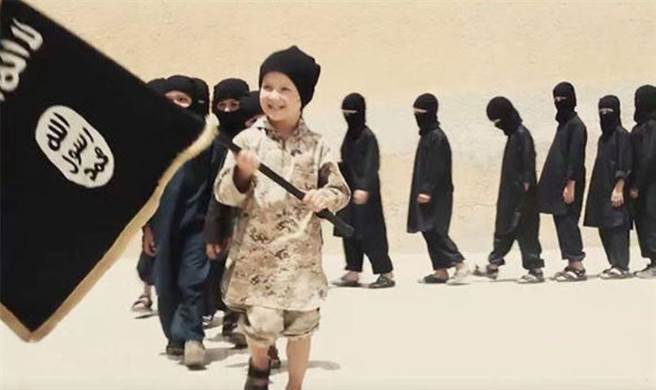 The Islamic State group in the Deir-ez-Zor countryside carried has forced three children, one of them as young as three years old, to carry out a horrific execution against three people accused of spying for the Kurdish People's Protection Units.

A video published by the "Waliyat al-Khair" media office of the group on Sunday showed three young men from Hassakeh province who had confessed, according to the video, to working with the People's Protection Units, which it referred to as the PKK, before binding them up in an abandoned amusement park in the Deir-ez-Zor countryside before being executed at the hands of children wearing military outfits, called the "lion cubs of the caliphate."

The video which had the headline, "He gave me life with his blood," showed the horrific execution process against the accused men, as one of the children, called Abou Maaz al-Shami, slaughtered him on command, while the second was killed by bullets at the hand of a child about three years old, who shouted "Allahu akbar."

The third person was killed by Khitab al-Qamishli, as 13-year-old whose brother was killed in fighting with the People's Protection Units a year and a half ago, according to the video. The video explains that Khitab left his family in Qamishli and joined ISIS when his brother was fighting in its ranks. The clips also show him participating in a stoning, likely against a woman accused of adultery.

The video adds that Khitab al-Qamishli lived with a foreign fighter after his brother was killed and did not return to his family despite attempts by his other brother to facilitate his return to Qamishli. Khitab appears in the video threatening his family with death "unless they repent to God."

Commenting on the video, the executive director of the Deir-ez-Zor 24 Network, Omar Abou Layla, said that "this crime adds to a series of crimes of the ISIS group against the residents of the eastern areas and Raqqa and Hassakeh," adding that, "these children have been subjected to brainwashing and have been incited against the rest of the Syrian people."

Abou Layla told ARA News that, "It is natural that after their brainwashing they will continue to despise the whole world, on the principle that they are in the right and the rest of them are infidels and apostates who should be killed, and their blood drank."

Abou Layla added that: "Most likely this crime was committed in the western Deir-ez-Zor countryside, but we have not yet been able to confirm the area specifically."

The ISIS group at the end of last month had documented a number of "lion cubs of the caliphate" executing people in Raqqa city during their training.