Saudi-owned Al-Hayat details the recommendations inside the separate Kurdish and Russian draft constitutions, which call for greater autonomy for Kurds and a more decentralized government, while also acknowledging the multi-ethnic make-up of Syria's demography 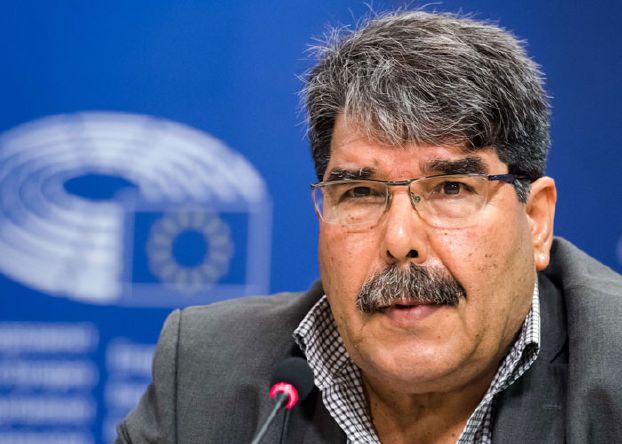 From a representative of the Kurdish Democratic Union Party, led by Saleh Muslim, the Russian Foreign Ministry received a copy of a “Kurdish constitution” which proposes establishing “Syrian federalism,” legitimizing Kurdish forces and establishing diplomatic relations in response to a draft constitutions developed by Russian experts and officials which proposed “self administration” for Syrian Kurds and a “regions assembly” comprising broad powers, including legislation. It seems that the Democratic Union Party which is opposed by Ankara, which sponsored the Astana talks along with Moscow last week, is comfortable approving the Russian draft, which calls it the “Syrian Republic” rather than the “Syrian Arab Republic.”

Foreign Minister Sergei Lavrov delivered a copy of the Russian-authored constitution to opposition members during a recent meeting in Moscow in an attempt to raise a discussion after notifying them of his annoyance at the comparisons with the “Bremer constitution,” a reference to the American civilian ruler Paul Bremer who oversaw the occupation of Iraq in 2003.

According to one opposition member, Lavrov is reported to have said: “We are not Bremer. The constitution is not Bremer’s constitution,” and that it was merely a draft to speed up negotiations in accordance with Resolution 2254, which stipulates the formation of a “representative and non-sectarian government” to draft a new constitution and hold elections. One participant proposed the formation of joint councils to discuss this constitution.

The Russians hope that this constitution will be on the table at the Geneva talks, which will be held at the end of next month after consultations of the UN envoy Staffan de Mistura in New York and Washington, and after an Iranian-Russian-Turkish meeting in Astana next week to solidify a ceasefire and establish a tripartite mechanism for monitoring it, in addition to resolving the issue of forming the opposition delegation amid Moscow pressure to establish a “united delegation” and the High Negotiations Committee insisting on its leadership role.

It is also notable that the Democratic Union Party, which contributed its ideas to the formulation of the Russian draft, had its representative to the Moscow talks Khaled Eissa deliver a copy of the “social contract” for “northern Syria federalism.” Eissa said that there were “shared points between the Russian and Kurdish drafts, including the lack of defining the ethnicity of the majority of Syrian citizens or their religion. Indeed it proposes handing powers to these regions to take decisions, although the Kurdish draft stipulates for broader powers to be handed to the country’s regions.” He noted “positive matters” in the Russian draft, including “getting rid of the word ‘Arab’ from the Syrian Republic’s name and not specifying the religion of the country’s president,” according to the Russia Today website.

Geography and not demography

The “social contract” text, which Al-Hayat obtained a copy of, begins: “We, the people of Rojava (west Kurdistan) of northern Syria, Kurdish, Arab, Assyrians and Syriacs, Turkmen, Armenians, Chechens, Circassians, Muslims and Christians and Yezidis, in our various religions and sects, know that the nation-state has made Kurdistan, and the house of two rivers (Iraq), and Syria a center for the chaos which the Middle East region is witnessing, and has brought severe problems, crises and tragedies to our people… in order to get out of this chaos we find that a democratic federalist system is the best system to address the historical, social and ethnic issues in Syria.”

He added: “Democratic federalism for northern Syria is based on a geographic concept (and not demographic constituents) and political and administrative decentralization and it is part of a unified, federal, democratic Syria.” He said that it is “a consensual federalist democratic system which includes the participation of all individuals and communities and gives equality in discussion, decision-making, implementation and takes into account ethnic and religious difference.”

The Kurdish constitution includes 83 articles, with the preamble to the “democratic federalist social contract for northern Syria an integral part of this contract.” In addition to a section to the effect: “I swear by God and the blood of martyrs that I will adhere to the social contract and its articles and that I will preserve the democratic rights of the people and the values of the martyrs, and to safeguard the freedom, security, and safety of the democratic federalist region of northern Syria and to preserve a federal Syria and that I will work to achieve social justice in accordance with the principles of the democratic nation,” which includes, “regions based on democratic self-administration.”

It proposes forming “councils” and “executive committees” whereby the “canton council is the legislative body elected by the free votes of the people and groups to develop specific policies for the cantons and take necessary decisions in this respect” in addition to the canton council electing its executive committee which administers the regions. It adds: the regions in the “federalist democratic system for northern Syria” are a unit of the self-administration composed of a canton or more, or a number of regions gathered by historically similar characteristics, demographically, economically, or culturally, and characterized by geographic integration and communication.”

Article 54 stipulates: “The democratic self-administration regions regulate themselves and administer their affairs in accordance with the basis of democratic self-administration in the social, political and economic fields, internal security, health, education, defense and culture … each region regulates itself in accordance with the basis of self-sufficiency in the economic sector.” It noted that the Kurdish self-administration regions in Al-Jazira, Ain al-Arab (Kobani) and Afrin were among the richest areas in Syria in terms of natural resources: gas, oil, water and agriculture. It continued: “Each region can develop and settle diplomatic, social, economic, and cultural relationships with neighboring countries and peoples as long as they do not contradict the federalist social contract,” in addition to proposing the formation of a “representative council for the people and groups in each region to carry out legislation, monitoring, and developing general policies, with electoral terms of four years, and regulate the mechanism of action by law.” Among its duties: “Declaring states of war and peace in the scope of federalism … approving the appointment and promotion of general leaders in the military council.”

Article 64 addressed “defense forces” which are the “armed defense forces in democratic federalism and will depend on the voluntary joining of people on one hand and self-defense duty on the other. It will be tasked with defending the democratic federal area of northern Syria, federalism, and its defense against any foreign attack or potential foreign threat.”

This allows the implementation of the words about the “armed groups” in the Russian draft, noting the presence of three military areas of the American army in the areas under Kurdish control supporting the fight against ISIS.