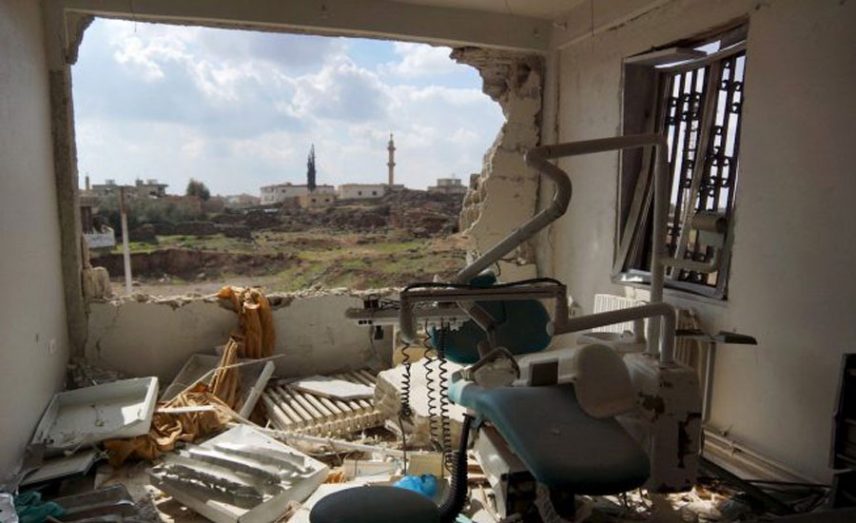 After suffering major losses over the years since the Syrian conflict began, the country’s medical sector still continues to endure blow after blow from the violence of the Assad regime and its allies through the deliberate bombardment of facilities and the killing of hundreds of doctors and medical staff.

Meanwhile, hundreds of medical specialists are still imprisoned in Assad’s jail cells amid muted criticism from the concerned international organizations.

Those who remain from among these trained doctors and staff have not given up practicing their humanitarian profession and have chosen to remain within liberated areas of Syria despite the severe danger of being directly targeted.

After three hospitals were taken out of service according to the Doctors Without Borders group, doctors were forced to set up modestly-equipped field hospitals and medical points which the regime has begun to target like armed opposition groups in an attempt to justify their bombardments.

Head of medical services in rebel-held Idleb, Munzer al-Khalil, told Sada al-Sham: “The deliberate and repeated targeting by the regime and its Russian allies has been the biggest challenge to working in the medical field in the liberated areas since the beginning of the revolution up to now.” He noted that the Idleb province alone has 130 cases of direct targeting of medical facilities, including hospitals, medical points, thalassemia centers, blood banks, and others.

Khalil added that the bombardment has recently begun to include residential districts which have medical programs, such as the district in which there are polio vaccination centers for children.

Khalil said that 182 people from among medical sector had been killed in Idleb province at the hands of regime forces, in addition to the arrest of 700 other people since the Syrian revolution broke out, adding that their fate was still unknown.

A report issued by the UK-based Syrian Network for Human Rights in July 2016 documented no fewer than 448 incidents of attacks against medical centers and civil defense centers last year alone, 257 of them at the hands of the Assad regime forces, including 89 medical facilities, 41 ambulances, and 120 targeting civil defense centers, in addition to seven Syrian Red Crescent centers.

The report noted that 167 people from the medical sector and civil defense teams had been killed throughout 2016, including 77 people killed by regime forces, with some of them dying under torture in prisons, while Russian forces have been responsible for the deaths of 55 people.