Widows of northern Syria face immense pressures in the wake of their husbands' deaths, as most are treated as inferior citizens and forced to comply with strict and demeaning expectations in order to receive support from family members, Asmaa al-Naasan writes in online magazine Al-Gherbal 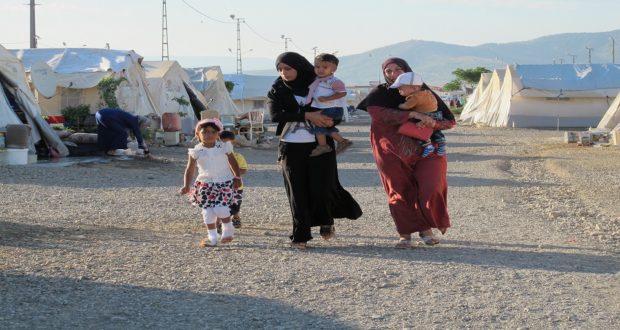 Since the Syrian revolution entered its seventh month the number of martyrs began to mount, leaving behind widows in the prime of life. As the number of widows reaches into the tens of thousand, many have become reliant on the closest male relative in their husband’s family, placing them in a state of dependency which makes them subject to pressures and abuse.

Further increasing the suffering of the widows, most are unable to enter into employment to reach a stage of self sufficiency as a result of a number of traditions and customs which do not permit them to work.

Persecution against the wives begins soon after a husband dies or disappears, as in-laws express hostility towards the wife of the deceased son. If the widow chooses to return to her own family’s house, it is likely that members refuse to help raise her children. As a result, women are deprived of any choice except to leave their own children to the deceased husband’s family to live a life of double loss.

Al-Gherbal met with Umm Ahmed, 28, who was displaced with the family of her husband to the Aqrabat camp near the Turkish border in northern Idleb. Umm Ahmed said that “The death of my husband was not the biggest tragedy, as I expected, but it was the beginning of a difficult journey. Today I’m forced to live with my three children in one room with their grandfather, who refused that we live in the house of my husband, due to his eagerness to care for the children.”

Umm Ahmed added: “The widow does not enjoy care in our society, but is rather looked upon with inferiority most of the time. I hope to find a husband concerned with me and the children, but customs do not allow the wife of a mother to marry again in some areas. This forces the widow to care for her children throughout her life, especially if she is older, and, if she is younger, she has only two choices: Either become a third or second wife, or accept marrying an old man to become a servant for him. If there are children with her, her chances for marriage diminish because of the responsibility of caring for them and the expenses.”

When the woman chooses to keep her children until they age in her care in the house of the second husband, it will create problems with the family of the deceased, in addition to new psychological problems the children will suffer from as a result of the discrimination between the father’s new children and the children of the mother whose husband died.

Zeinab, 21, who was displaced to the Atmeh camp told Al-Gherbal that “My life has become very difficult. My children were under the care of their father who was their guardian, but now I live on aid given by some charities and humanitarian groups.”

Zeinab’s situation is like that of other widows who depend with their children on what is given out by aid groups because they are unable to play any role in securing a livelihood. This is what Al-Gherbal was told by Fatima, a psychological counselor, who said: “Widowed women depend largely on networks for orphan care which give them a small part of what they need within the camps, especially for children of martyrs. This puts major indirect psychological pressure on them and always puts them at the mercy of the aid officials.”

Mufida, 19, who is displaced in the Qah camp in northern Idleb told Al-Gherbal: “My siblings and the siblings of my husband do not allow me to work to the extent that I’m not allowed to leave the house unless I’m accompanied by one of them. They always ask me not to think about anything except my children and housework, such as preparing food, washing, and cleaning.”

According to Mufida, there are a number of widows who have managed to become independent in their own homes but they have not found appropriate work opportunities. She added that they are subjected to a number of psychological and physical pressures because of their efforts to secure their needs and the needs of their children on their own, in addition to being social outcasts.

Within this context the psychological counsellor Fatima said that: “Deliberately preventing these women from forming the social relationships which would allow them to overcome their problems is a crime and turns these women into victims, forcing them towards actions they may not see any alternative to, such as suicide, fleeing the home, or harming their children. There have been a number of cases of suicide attempts or trying to flee the home.”

Fatima continues: “It has become clear to me throughout interviews with widows, they are reluctant to disclose what sort of health and psychological support they need themselves because they have passed through very difficult periods, including the death of their husband, and have assumed direct responsibility for the children and the crises that have followed. Therefore, the psychological pain increases along with the level of poverty as they are forced to move from one place to another because of the continuous (aerial) bombardment and the problems of the camps. All of that guarantees psychological and physical stress. Rest for these women is something that is not available.”

An activist in the field of psychological support, Hamida al-Youssef told Al-Gherbal that: “The first steps to overcoming these problems is ensuring sufficient safety for these widows. A number of them are subjected to all types of verbal and physical harassment, and even this is easy compared with the isolation, depression and psychological pressure for those who have become responsible for their families, and have started to go out to work or arrange things for their families.”

Youssef said that “improving the structural conditions to ensure the ability of women to care for themselves requires some key elements, first of them self-awareness, and then giving sessions in psychological support, and the larger feelings of responsibility, in addition to education and gaining skills and experiences — social capital which can eventually form an alternative to dependency and subservience.”