The refugees who streamed out of the ravaged city of Aleppo on buses towards an unknown future have found cold shelters elsewhere in the country, yet their hopes to return home stay as strong as ever 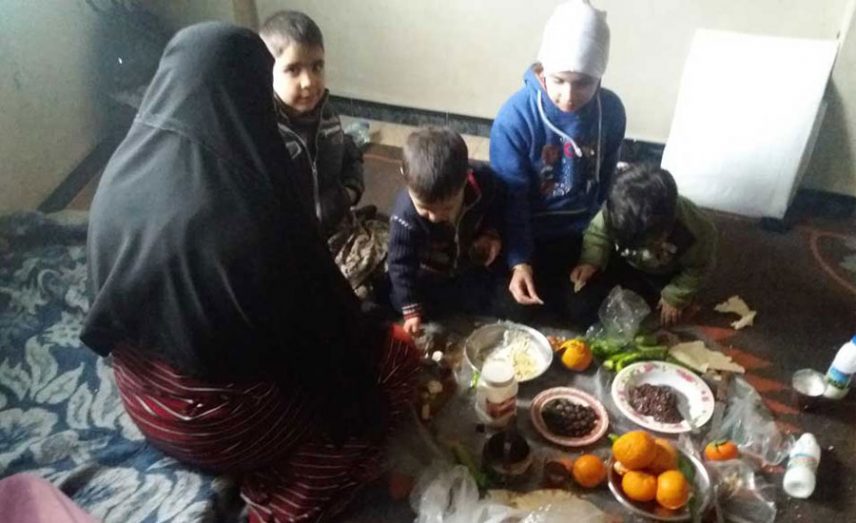 Umm Ali and her daughter Amina, 24, from the al-Sha'ar district of Aleppo, found themselves widows overnight. The father and husband were martyred by a single rocket. With words draped in the pain of losing the breadwinning husband and the dear father, Amina said: “I’d hoped to accompany my husband’s body to the cemetery, I’d hoped to bury him once and in one piece.”

After the districts of eastern Aleppo were subjected to a fierce assault by regime forces, Russian aircraft, and sectarian militias at the end of 2016, the rebels were forced to accept the evacuation of the besieged districts.

Under the supervision of the United Nations, 45,000 civilians left. Idleb city and its countryside provided haven for many of the families after hundreds of them had stayed outdoors for days without a roof to cover them nor shelter from the cold weather which had invaded the country during the bitter days of their displacement.

Amina and her three children were forced to flee to Idleb city with her mother, the widow and mother of four children. Securing housing in the unfamiliar place was no easy task. With painstaking effort, Umm Ali was able to find a house in the al-Kaseeh alley. The house had a room, bathroom and small kitchen. It was called the “house of the widows” or the “house of the Aleppo orphans” by the neighbors.

The room had barely enough room for the new residents. It was dark, with daylight slipping in through a small window. They passed the nights in the light of candles placed on the ground, while half of the family were covered by a threadbare rug the neighbor had provided. There were also some simple items which provided some warmth and a few light blankets.

In a weak tone, Umm Ali says: "Fear of air strikes and the siege which tightened day after day could not convince me to leave a place my eyes had seen since my youth." She explains that the family had grown accustomed to the sound of emergency sirens and the sight of dead and injured civilians.

"We had the patience to continue the bitter life despite the bloodshed. But the fear of rape and abuse and revenge carried out by those out of control possessed me, especially after losing my husband, and ‘broke my back,’ as they say,” she says.

As Umm Ali moved between different districts of Aleppo fleeing the regime incursion, the earth gradually receded from under her feet. During her displacement, she clung to some mementos which her husband had left her in an attempt to preserve what was left. However, the situation imposed during her displacement prevented her from carrying even the children’s clothing. She had to burn the clothes and her personal possessions.

Her daughter joins the conversation, as tears trickle down her face: “My heart was burned twice — first from missing my husband and second when I was forced to leave my home and flee Aleppo.” She continued: “I hoped to bury my husband like anyone else. His body was reduced to shreds and every day the neighbors would find a piece among the rubble. He died and left me with three children. I don’t know how we will live.”

Ali, 19, describes the journey out of Aleppo: “We were subjected to beatings and insults but what pained me most was when one of the regime fighters waved his member in front of everyone to provoke the helpless men and to humiliate us all. At the time I wanted to kill him or kill myself, but my mother tried to calm me down with soothing words: ‘Patience, my son, don’t raise your hand. Your life isn’t worth more than a bullet to them.’ I struck my forehead and closed my eyes, sighing at the impotence shackling me.”

He concluded, rubbing his face with shaking hands: “We can only complain to God.” Ali is looking for work, in a city with almost no jobs, in order to provide a living for his bereaved mother and his young siblings and sister who lost her husband and is mother to three children.

Umm Hassan al-Jassim, who with her family survived the horror of the bombardment, was not spared from the ache of losing her son who was martyred during bombardment on the al-Zabadiyeh district in Aleppo. In the house where the family has taken shelter in Idleb — nothing more than a dark cellar where you must light the lamps at midday to see your way through it — she says, in a stuttering voice: “If only life had not come to seeing the green buses that carried us outside our land… for long hours of the travel, the tears and pain and groans of anguish were not interrupted… With a husband whose health was deteriorating because of the lack of heart medicine and a daughter who needs special care because she was born with Down's syndrome.”

“We left Aleppo with our clothes and now we do not know how we will spend the coming days without any income and given how difficult it is to find suitable work for my husband. We face the unknown and we want relief and resolution.”

Umm Ali and Amina and Umm Hassan are two mothers who are at any moment waiting for the pain to escalate, but they have not stopped hoping to return to the home which houses their memories.