Hanadi, a refugee, relates the story of how she suddenly found herself in regime detention centers where she faced brutal interrogation, torture, and a sham trial 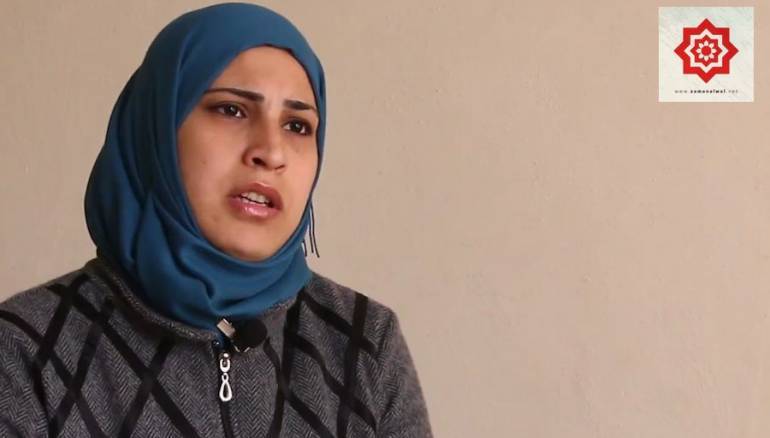 A former detainee tells the story of her brutal two and a half year detention in the regime’s prisons.

Hanadi al-Hussein was distributing aid in one of the besieged areas in Syria on October 5, 2012, the day she was taken. Upon leaving the neighborhood, she was stopped at a regime checkpoint where the soldiers told her she was wanted by the regime and beat her violently.

She was then dragged into a car and blindfolded, her hands tied behind her back with a strip of cloth. She was taken to Branch 227, but she did not know her destination until she entered the detention center.

Hanadi told Zaman al-Wasl that she was interrogated and tortured. The savage treatment was to force her to confess to certain crimes and to extract names of fighters and information about their funding and their access to weapons in besieged areas, she explained. Unable to withstand the torture and abuse, Hanadi said she was forced to confess to various charges such as funding armed groups.

Two months after her interrogation session in Branch 227, Hanadi thought she was being released when she was approached by prison guards and told to pack her things. She was then surprised when they blindfolded her, and she learned she was wanted by another branch where her suffering would start anew.

Hanadi was taken to Branch 291 and she recalled, “I was somewhat lucky, as this branch did not have solitary confinement for women.” She was subjected to similar brutal treatment in this branch as her interrogators attempted to extract more confessions.

She said that during her time in the branch, she and other female detainees were tortured in a systematic and brutal way. The interrogators, she explained, relied on psychological as well as physical torture. She and other detainees were in a constant state of apprehension and terror following each interrogation session, fearing that they would be taken for another round. This would happen repeatedly, she added.

How can a Syrian torture her, another Syrian, to force her to confess to whatever crimes she was charged with, Hanadi wonders.

“I was not sure what was happening around me. Other than the psychological torture we were subjected to, the sounds of torture from other cells and the unforgettable smell of death made our suffering worse in detention,” she said.

In detention, Hanadi also suffered from conjunctivitis as a result of being blindfolded, and it remained untreated. She said that the only drug available in prison was paracetamol and that the nurse who administered it carried the medication in one hand and a stick in the other. No medical care was provided even to those who were ill or wounded and disfigured from torture, she added.

Not before long, Hanadi moved to Branch 215 in Kafr Sousa where for the first time she faced charges of terrorism and was sentenced by a judge on charges leveled against her in Branch 291.

Hanadi described the judge, who denied her a lawyer or the chance to defend herself, as completely inhumane and similar to her interrogators in the intelligence branches.

She said she experienced great terror in detention and it caused her to temporarily lose her memory. She added that she is no longer the same person she was before her detention and that she continues to suffer from the trauma, despite two years having passed since she was released.

As she continued her story, Hanadi placed a hat on her daughter’s head and played with her. She said that for two weeks after her release, she was “wanted” by regime security branches including the Palestine Branch. She had tried to settle in Damascus and had not even thought of seeking asylum outside the country, but with the looming threat of another possible detention, she left Syria at dawn one morning for Turkey.