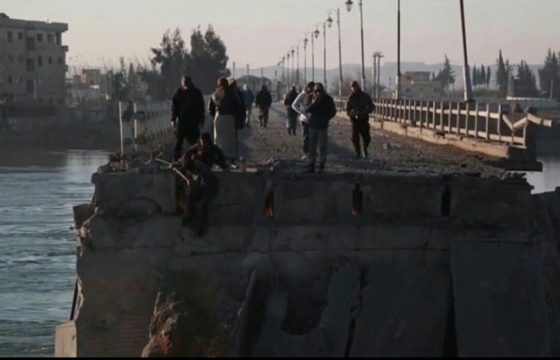 “We want to live” — the words are easy to pronounce, but Abu Mohamed, who owns a grocery shop in the city of Raqqa, spoke them in a Raqqa accent with a long sigh, describing commercial activity in the city’s markets, and followed them by saying, “Despite the war and bombardment, it’s alright.”

In an interview with Enab Baladi, Abu Mohamed, in his 60s, describing the conditions of life in Raqqa in light of ISIS’ oppression, harassment, and heavy taxation of traders, said that “the economic shocks and the instability has not necessarily eliminated trade but it has impeded its growth and development.”

Activists estimate the number of civilians in Raqqa at about 200,000, still carrying out their lives inside the city amid “major” restrictions from the Islamic State group in control of the city. The recent rapid military advances toward the city in the form of battles raging in the countryside have only led to increases in the prices of food and goods, according to local people.

Hussein Ali, a shop-owner selling used equipment in Raqqa said that the flow of money and goods to Raqqa was not cut off but “it has seen a disruption in the level between the increase and decrease. Traders have always found sources of new goods to supply the market which helped continue the rotation of the wheels of business.”

The sources of money into Raqqa come from foreign transfers and money brought by displaced people from the countryside coming into the city, according to residents. Additional amounts of money have been also introduced by the organization, which pays its fighters salaries and distributes “alms” to some of the city’s families.

With regards to the city expecting war and enduring daily bombardment, it may have been that the market should be affected by a recession. However, the movement of selling and buying has appeared normal, despite the difficulties of transport and the higher prices, according to Khalaf al-Hussein, a truck-driver who transports goods from and to Raqqa.

Hussein believes that the selling and buying is continuing despite the destruction of the bridges. He says communication with the outside world has not stopped, even as the volume of traffic and transport has decreased, adding that the transport of goods has continued through boats.

The real estate market in the city has been affected by the course of events, as it has seen a sharp decrease in the prices of apartments and houses after many residents hastily sold their homes before fleeing the city, and in a reverse movement, incoming flow of people has decreased, lowering the rate of demand for home purchases and rentals.

The slow trade has also affected the market for home furniture, both used and new, Hussein said, attributing the decrease in prices to “fighters selling the furniture of their residences, which were acquired by the organization on a variety of pretexts.”

Some of the organization’s fighters who obtained houses have proceeded to sell them or to sell the furniture. According to the testimony given by some residents to Enab Baladi, some of them have left toward the Deir-ez-Zor countryside to sell them in a place “safer and closer to the Syrian-Iraqi border.”

Hussein described the issue as “a form of looting,” and expected an increase in the phenomenon throughout the coming weeks as the siege tightens on the city. “Some of the fighters are selling everything in their hands before fleeing the city.”

There is increasing talk among the residents of Raqqa today about the Islamic State group stockpiling goods in preparation for a long siege while traders are hoarding goods to sell at a higher price under the siege, according to residents.