The Syrian regime has used war to displace residents from strategically located cities and townships to northern areas of the country, a calculated policy of demographic change aiming at creating a factual religious and ethnic divide 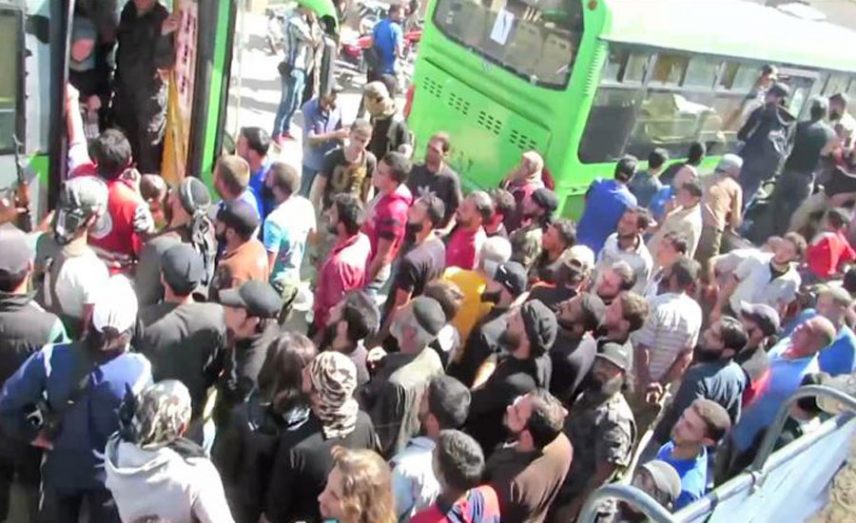 Regime warnings to change the demographic composition of Syrian cities have assumed practical dimensions in line with the regime’s vision of “useful Syria” as both the military solution and the international and regional proposals for a political resolution failed to yield results.

The regime has conducted broad displacement operations in many Syrian regions, especially in Homs and Damascus and its environs, using as pretexts either reconciliations and truces or starvation and militia violence. The regime and Iran, while pursuing different goals, have worked together to effect real demographic change, a process which has proceeded openly, reaching a climax at the end of last year.

What follows is a list of the most prominent cities and towns so far subjected to forced displacement operations of the regime which plans to swap original residents with families of sectarian militias, thereby creating a change in the demographic composition of Syrian society.

The city of al-Qusair along the Lebanese border and the strategic city of Homs was the first of the cities where the regime tried to displace its residents and implement a plan of demographic change. In 2013, regime forces and fighters from Hezbollah besieged Qusair. It was the first battle in which Hezbollah openly intervened in the Syrian war. Opposition fighters withdrew after fierce battles and a siege that lasted for weeks. They left with their families and the city was evacuated by the residents. Afterwards, Hezbollah proceeded to take control of the city, followed by attempts to bring in Shiite families.

After this, the regime moved against the Old Homs districts where a large number of fighters were stationed. After besieging it for about two years, the matter ended with the departure of about 1,000 fighters in an agreement between the regime and its allies and the opposition fighters overseen by the Untied Nations in May 2014. This was the first strategic success of the regime and its allies based on a total siege and destructive bombardment, murderous starvation and forced displacement.

After that, activists said that Shiite and Alawite families were brought to the city to take the place of the departed Sunnis. The regime issued the newcomers registration identity cards as residents of the Old City in order to later use as confirmations of their residential status.

Daraya, gateway to the displacement of Damascus

The success of the strategy of siege and starvation and expulsion in Homs emboldened the regime and its allies to utilize it in other cities in order to secure the capital and the strip connecting it to the coast. Daraya was one of the first victims in the Damascus countryside. This city, which was subjected to siege and bombardment for four years, signed an agreement on August 27 which led to the displacement of its residents, whereby about 8,000 people, including 700 fighters, were transferred to the northern regions of the country.

The displacement of Daraya came after four years of fierce military assaults against the city by the regime, during which the Syrian Network for Human Rights recorded the use of 7,846 barrel bombs, resulting in the death of about 817 civilians, including 67 children and 98 women. 56 cases of attacks on the city’s vital centers were also recorded.

After the expulsion of the people of Daraya, journalists reported that 300 families belonging to the Shiite Iraqi al-Nujaba Movement arrived in Daraya to occupy it.

Daraya was the stumbling block in front of the regime and its militias. No sooner had the operation to evacuate it from its residents and fighters on the “green buses” than the regime launched displacement operations in other areas in the Damascus countryside.

On October 13, 2016, the towns of Qadasiya and al-Hema were put on the displacement list. On 22 buses, more than 2,000 people were carried out to the city of Idleb. The number included more than 300 fighters.

On December 2, 2016, the green buses appeared in the city of al-Tel, or what is known as the “city of a million displaced,” to northern Syria, evacuating the city of 2,000 people, including 500 fighters and a number of people wanted for military service. A council of 200 young men from the city were armed by the regime to defend the city.

On October 19, the displacement operation was applied against fighters from Moadhimiya al-Sham and families from the city of Daraya living in Moadhimiya. In this process, about 3,000 fighters and their families were expelled, in addition to a number of families from Daraya.

November 28, 2016, was the date of a new series of forced displacements in the Damascus countryside toward northern Syria, when the process of expelling 1,450 people, including fighters and their families, from the Khan al-Sheikoun camp and Zakaya began. The displacement process was completed after the opposition negotiating council reached a deal with regime representatives for the departure of fighters who refused to “regularize their status,” to be accompanied by their families to Idleb. They evacuated upon being allowed to take 60 percent of their personal weapons.

On December 16, 2016, after the regime managed to take control of most districts of eastern Aleppo and to besiege civilians in a small area no larger than four square kilometers, a deal was struck, according to which besieged Aleppans, numbering more than 200,000 people, underwent the process of expulsion toward the western Aleppo countryside and Idleb.

On December 29, the displacement in Wadi Barada began after a long siege and 40 days of bombardment and fierce fighting, whereby 2,100 people, consisting of fighters and civilians, were expelled from Wadi Barada to Idleb. The number included 700 fighters.

The Syrian Observatory for Human Rights said that the displacement operation from Wadi Barada toward Idleb province ended with the departure of those who did not agree to remain under regime control. However, there were still terms that the regime was obliged to observe. It was agreed that the regime army would not enter the homes of the people of Wadi Barada who had decided to stay, and that it would not pursue those wanted by the security department.

The forced displacement has also included Turkmen, as the regime also expelled the residents of the towns of Qazhal and Umm al-Qassab in the western Homs countryside, the majority of whom were Turkmen. Numbering about 12,000 people, the Turkmen left on promises of security against bombardment.

The Jabal al-Turkmen and Jabal al-Akrad, which together extend over an area of 530 square kilometers, with over 300,000 people, have been evacuated completely.

In the Hassakeh and Raqqa countryside, human rights organizations such as Amnesty International and Human Rights Watch have documented PYD attacks against more than 14 locations, such as al-Husseiniyah and Solouk, with the aim of expelling their non-Kurdish residents.