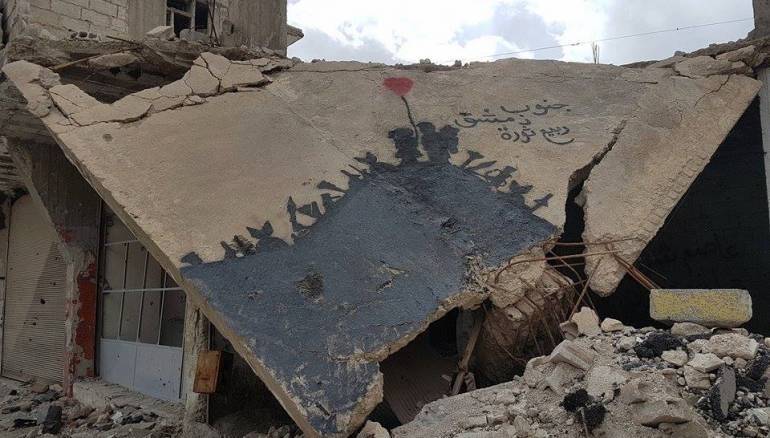 A distinct outcome of the Syrian revolution was graffiti art which was first used by school children in Daraa six years ago. This early inscription provoked the regime to start a relentless war against its own people.

Mirroring people’s moments of hope and despair, the changes in graffiti art reflected the transformations the Syrian revolution underwent in the last six years.

Southern Damascus had its own stories of using graffiti art. After an agreement between the regime and rebels in 2013 led to the Islamic State’s control of the rest of the Yarmouk Palestinian refugee camp, people lost their enthusiasm and fear of another difficult siege. Thus, they started to draw on walls to express their emotions and hopes to keep the soul of the revolution alive through peaceful means.

The Revolution Spring was formed by nine graffiti artists, who started work towards the end of 2013, following the Islamic State’s control of Yarmouk camp which led to the displacement of the majority of the population. These graffiti artists sought to encourage people and give them hope, as they tried to keep the soul of the revolution alive by drawing on walls to deliver their messages. Their first graffiti drawing was called: “Yarmouk and us are the same, brothers.”

Sami Darkashli, a graffiti designer of the Revolution Spring group told Zaman al-Wasl that he can draw effective graffiti with important messages through using simple artistic methods, adding that such drawings encourage people and increase feelings of solidarity with people from other disaster-stricken areas like Aleppo.

”Drawing on walls is in the simplest way to deliver messages away from the complexity of social media or other news channels,” Darkashli added.

He explained that they have a designing team that decides what, when, and where to draw graffiti to match the circumstances; “for example, we draw encouraging pictures on destroyed places, but when we want to deliver particular messages, we usually do the drawing in busy places like streets and markets,” he clarified.‫

Darkeshli said that people had reacted positively to their drawings with some asking for graffiti to be drawn near their houses.

Darkeshli considered graffiti art one of the main artistic forms of the Syrian revolution. He noted that its simplicity made it understandable to all people at all ages as it added to the familiarity and coziness people feel toward a picture close to them.‫

Mohammed Abu Qassim, a member of the Revolution Spring graffiti team, considered graffiti as a peaceful form of activism, similar to demonstrations and brochures, adding that it was a continuation of the original revolutionary movement.‫

He said that the “Spray man” used to apply the very simple method of making drawings on walls even under heavy surveillance of the regime intelligence. “But we first drew the picture on a carton board with which we made a template to spry on spaces, then we added minor details with our hands,” he said.