With many beginning their work in coordination councils around the country, large numbers of activists have upskilled in a move aimed at providing professional coverage of the Syrian crisis in a place where most foreign outlets cannot, opposition outlet Enab Baladi writes 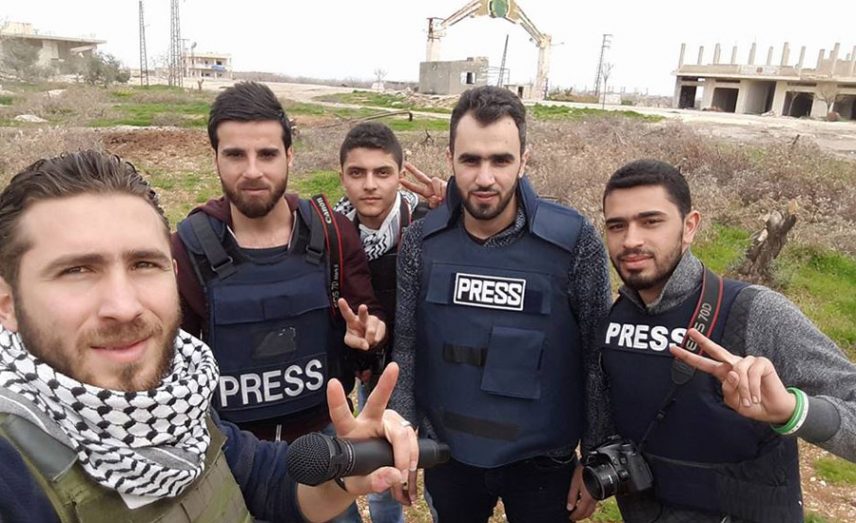 The Syrian revolution, according to experts, is considered the most documented in history. It is described as a filmed and photographed revolution, whose events have been transmitted in sound and images by activists from the moment it first erupted on March 15, 2011. These images, which have been captured with simple tools and have filled screens around the world, have shown the the Assad regime pursuing a policy of force against the Syrians opposed to it, alongside a battle to deny coverage of events by the international media. After six years of dramatic events, most Syrian activists have professionalized their working practices, joining and founding a number of institutions. In this report, Enab Baladi highlights seven existing media institutions established by such activists.

The first images of the chemical attack on Khan Sheikhoun played an essential role in changing the attitude of U.S. President Donald Trump toward the Assad regime, making the event a turning point for the Syrian issue just as the image of the bloodied child Omran, in Aleppo, obtained an unprecedented amount of news coverage in Western media. These are just some of the dozens of examples of work by media activists who have developed and institutionalized their working methods with the passage of time.

The Syrian revolution's coordination councils in various provinces of Syria, with modest capabilities and simple technology, gradually developed a professionalized mirror reflecting the reality of the uprising to the countries of the world. They took on the titles of centers, networks, agencies and foundations, and gained local status in terms of coverage within specific geographical areas. They have suffered the same as the new Syrian media has suffered, through a lack of material support and professional training.

However, despite the obstacles, these small media institutions have maintained their essential role because they are the first source of information in areas outside regime control — and sometimes even under its control — in Syria.

In this regard, Enab Baladi is underscoring the work of institutions active in seven Syrian provinces, through interviews with their members, and is surveying the views of Syrian journalists and their evaluation of the media performance in the “liberated” areas.

Daraa: cradle of the revolution

The coordination councils of Daraa city, the cradle of the revolution against the Syrian regime, merged with the Nabaa Foundation and have, over three years, been the most prominent media face in the southern province through their website which covers daily news, both social and from the front lines, as wel as through active social media accounts.

Damascus: Voice of the Capital

Damascus activists have since 2016 turned to the relatively modern “Voice of the Capital”, which has become an important source of information primarily about the city of Damascus and its countryside. The Voice has gained a following since the Syrian capital suffers from the domination of official media outlets expressing the views of the Assad regime and notably lacks coverage of new media in comparison with areas under opposition control. The network is composed of 20 correspondents in addition to its manager, who also works as its editor, alongside a technician. There is a full team in Damascus and its countryside as well as a network manager in Turkey to facilitate publication and communication.

The city of Hama and its countryside have seen more modest examples of new media outlets appearing, which has prevented the province from keeping up with the development of new media in other areas. However, the Assi Press center, which was established in May 2016 by a group of local media activists, has been trying since its launch to establish a solid media base in the central region. Assi Press covers most of the southern countryside of Hama, which is under siege by the Syrian regime, the city itself, which is under government control, as well as the northern and western areas of the province. The coverage of the eastern areas is weaker given the complicated military and security situation. The center is trying to fill the gap in cooperation with local activists in the area.

In Idleb, the one Syrian province totally under control of the Syrian opposition, media work is relatively widespread compared with other areas, and across the province media institutions have been developed, which have had a prominent role in covering the social and front line events. Over the past three years the Idleb Media Center has been one of the successful projects in the province. Its work is focused largely in Idleb city and the areas of Saraqeb, Jisr al-Shughur and Khan Sheikhoun, and, to a lesser extent, in the other towns of the province, alongside field coverage provided from the Syrian coast, Hama and Aleppo.

Media in Aleppo province has been able to influence Western and Arab media and keep up with developments in the city (before the regime took control of it) and its countryside under opposition control. The Thiqa Agency achieved reasonable distribution within a year of its establishment and is trying to include most Syrian provinces.

Raqqa: secret but not silent

The eastern regions of Syria have suffered from a clear lack of media coverage the Islamic State (ISIS) took control in early 2014. The clear lack of media has continued even after the Syrian Democratic Forces' entry into many areas of the northern and western Raqqa countryside, with the media coverage concentrated on institutions and campaigns carrying out their work in secret — however, they have achieved an acceptable level of distribution.

Deir-ez-Zor: Deir-ez-Zor is Being Slaughtered Silently

The Euphrates Post foundation, which was established on Aug. 25, 2014, as a Facebook page under the name “Deir-ez-Zor is Being Slaughtered Silently,” has developed notably over the last eight months, and has transmitted coverage of events and violations in the province to other areas in the eastern region. Ahmad al-Ramadan, manager and founder of the Euphrates Post, said that the institution relied on the principle of “self-financing” to cover its expenses, by marketing and selling video recordings and visual reports to Western and Arab channels and institutions. This has contributed to achieving a monthly income for its workers inside Syria exclusively, while those outside the county work as volunteers.