As imminent battle approaches, the uncertainty of ISIS control over the city has resulted in severe economic hardship and an exodus of many businesses and work opportunities, opposition website writes 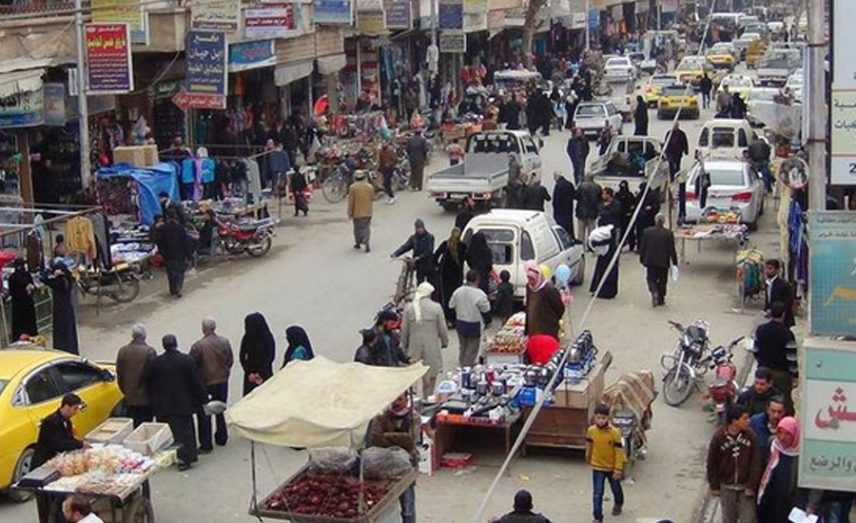 The fighting that has erupted on fronts close to the city of Raqqa has added further misery to the suffering of civilians living under Islamic State and narrowed their means of livelihood due to the impact of the defeats dealt to the organization, adding hundreds of people to the ranks of the jobless every day.

Since November, Raqqa’s economy has entered into a new process of collapse, as the U.S.-backed Syrian Democratic Forces took control of the village of Tel al-Simin (35 km north of Raqqa) and then advanced toward the city, progressively leading to a major loss of the faith of a large number of traders in the provincial capital's market.

Before the battle for Tabqa began in March, and then the route which had been under ISIS control to the Aleppo countryside was cut off, traders and financiers in Raqqa city began stopping orders of goods and clearing out storehouses, with many transporting all their goods and money toward Deir-ez-Zor province.

The ISIS leadership did not express any notable opposition to the behavior of these traders, as long as they paid the necessary taxes on goods during the transport — and donations for some influential members of the group.

During a short period, buying and selling nearly halted for everything but necessary items such as food, medicine and fuel. Well-known trading families (such as the Babansi, Aboud, Zina families) ended their work in the city, with some of them able to escape by paying large sums — up to $20,000 — to some ISIS leaders in exchange for official documents permitting their passage through checkpoints to areas under SDF control, and then onto areas under Free Syrian Army control in the northern Aleppo countryside.

A trader in Raqqa who spoke to Ain al-Medina estimated that the amount of traders and employers who liquidated their businesses and fled the city with their families was more than 50 percent, with the remainder waiting for an opportunity to escape.

On the margins of the deteriorating situation of the markets, emergency work has flourished over the last few months, such as the manufacturing and trading of tents for displaced people from the city of Maskanah and its environs — which are under regime control — who came down to manage their affairs in the outskirts of relatively safe villages and towns, while transport in boats and ferries between the two banks of the Euphrates River south and east of the city of Raqqa has become active.

The withdrawal of money and goods and the paralysis of the markets and the accompanying reluctance of most residents to spend their savings, except on necessary items, has had a destructive impact on related sectors, as most of the workshops and employment sectors have dismissed their employees, increasing the unemployment rate which, according to local estimates, sits at around 80 percent for those who are able to work.

It is notable that over the last few months, the behavior of ISIS members has changed from excessive consumption on amenities to a focus on the economy and an attempt to save, as a result of the successive reductions in their monthly salaries (down to 40,000 Syrian pounds a few months ago).

Transfers from residents' family members working in the Gulf states and refugees in European countries and Turkey, of what they save from their monthly income, have been a main source of income for most residents.

The average monthly financial exchange sent by these people to their families range — according to estimates from exchange workers — from 200 to 300 euros, or its equivalent in other currencies. These amounts limit the poverty of those who receive them and secure basic daily expenses, despite the successive increase in consumer prices from time to time with each setback for ISIS on the battle fronts.

So far, items and goods connected to daily needs have remained in stock, as the farmlands of nearby villages (such as Kasarat and Raqqat as Samra) secure the needs of vegetables and meat. Fuel in the form of crude oil from Deir-ez-Zor arrives before being refined in Raqqa.

Weekly flour supplies for the bakeries have been maintained with relative stability despite ISIS controlling the grain rate. The group has been buying most of last season's harvests and distributing part of it in the form of flour at commercial prices in the market, while selling another portion to traders connected to the regime, according to rumors.