Refugee workers voice concern over the treatment of the issue, while Lebanese media are estimating the number of Syrian refugee births in the country at 300,000 during 2017 alone, Enab Baladi writes 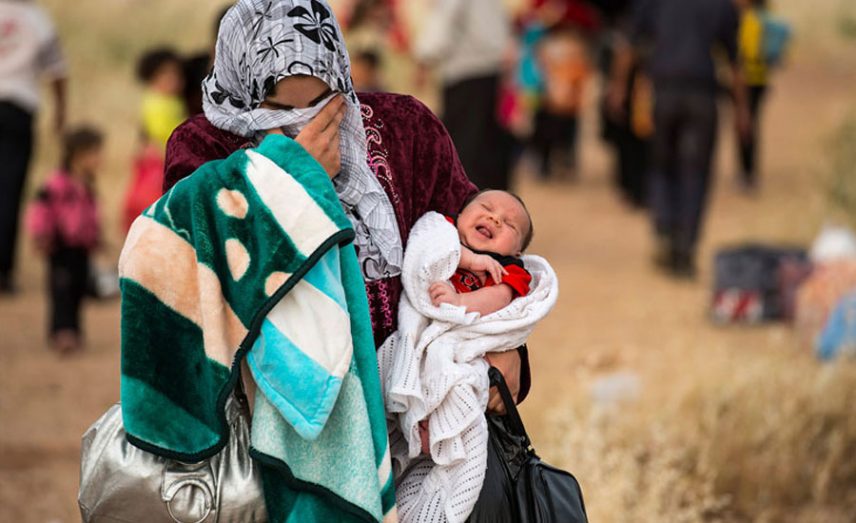 Free housing, financial coupons and health services can persuade any two stable spouses to have children without account, but no one knows exactly why the residents of Syrian camps choose to add a new “asylum paper” to the unending list already that holds the names of 5 million Syrians, faithfully kept in the records of the United Nations High Commissioner for Refugees.

Recep, Tayyip and Erdogan — months-old Syrian triplets — are not the only ones but they are the luckiest, as they were born in Turkey’s camps amid celebrations attended by the president himself (on a visit to a camp near the Syrian border in 2012).

There are eight births a day in the Zaatari camp in Jordan, with the camp witnessing the first cries of 49,000 children who have been born there since 2012, a number which would be hard to believe if it had not come from the director of the camp himself, Abdul Rahman Omoush, complaining of women who were not prevented by the fragility of the tent from practicing normal marital life.

Why not? In the middle of the camp, bridal dresses and wedding supplies are sold, followed by a caravan for a beauty salon where women emerge with bright makeup, blonde dye, henna and a manicure, decorated, toward their tent — fabric placed on a mud patch, inside of which is a bedroom decorated with red hearts with “You are my life” written on them.

Education and awareness sessions are attended by the women of Zaatari camp about the need for family planning and to refrain from having children, eventually leading them to the obstetrics clinic in the “childhood” center at the Zaatari camp entrance. Women who pass by the beauty parlor are expected to pass by again the next day — but this time toward these clinics.

The cry of every Syrian child echoes the cry of the Jordanian government, which says: “$10 billion is the price of hosting you on our land” — this coming at the opening of the Refugees in the Middle East and Human Security conference in the capital Amman.

The scene does not differ much between Zaatari and Arsal in Lebanon, which has the presence of more than 300,000 pregnant Syrian women who are expected to give birth in 2017, according to estimates of Lebanese newspapers about the “proliferation” of refugees, journals that deafen their ears to claims of “ignorance and backwardness” and blame reports submitted by aid agencies to the Lebanese authorities.

This rising pace of the number Syrian births in refugee camps has made them a subject of interest, and pushed some publications, including the Ad-Diyar newspaper, to predict that the number of Syrians on the ground will reach 2 million refugees.

“Racist” accusations, is how they were described by Nabal al-Alou, head of the protection section in the Sabra and Shatila Palestinian refugee camps, denying the estimated number of pregnant Syrians. But she could not deny they did not stop having children as a result of what she called “ignorance.”

“It’s wrong to stop two spouses from living their life normally,” Nabal says, adding, “It’s the last way to unload the negative energies they have carried with them during their departure from their devastated cities.”

“The only thing the residents of the tents know, despite suffering from it, is cold and lethargy inside the tent for many days, especially in the time of snowstorms, which has led to many children being named Zeina, Huda, or Alexa, after those storms.”

But… What about methods of birth control and contraception? The idea is rejected by camp residents, to avoid resembling foreigners and because it is “forbidden by God,” whether these methods are natural or artificial, and it is not possible to persuade them to do so — if the wife is convinced of the need to use birth control, the husband will reject it, adhering to the culture of reproduction on the basis of, “this is what our forefathers did.”

The official at Sabra and Shatila believes that it is impossible to implement the idea of birth control on refugees, most of whom come from the countryside and are rooted in the belief that having more children and enlarging the family increases standing in the village, even if they are forced to hide behind a tent cloth.

My grandmother was asked, because of her large number of children, “Did you not have television?” But the same question cannot be asked today of Syrian refugees in the camp, because the answer is predictable: they have no television or forms of entertainment.