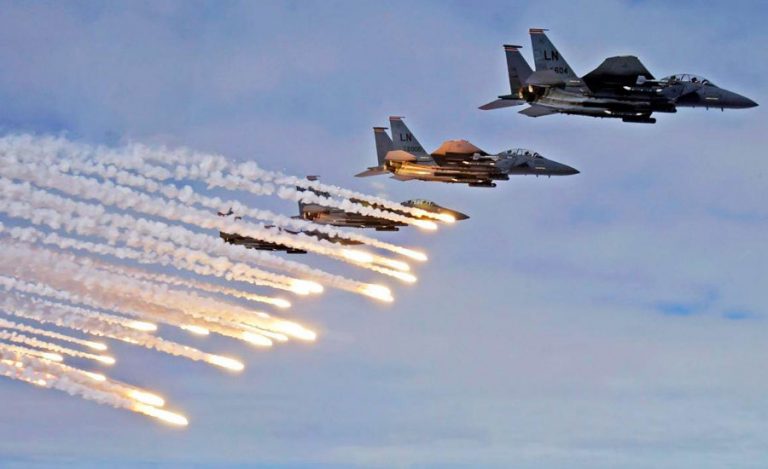 In hours of bombardment, Deir-ez-Zor nearly turns into a part of hell. There is no choice but to surrender to fate, as the chance of death is one with the blind bombs and dead consciences.

The American acknowledgements of errors after the massacres carried out by coalition warplanes from time to time against civilians do not mean anything to anyone, because they will not return the dead their lives and will not hold the killer to account, and they will not prevent these errors from occurring again.

In the last 40 days, according to the Syrian Observatory for Human Rights, 240 civilians have been killed in the town of Mayan alone, most recently days ago when coalition planes destroyed a secret Islamic State (ISIS) prison with its inmates — 40 prisoners with various charges were killed in this coalition raid, alongside the guards whose deaths will not make a significant loss for the group.

On the next day, ISIS completed the monstrous scene by presenting the corpses of the prisoners in the streets on the pretext of helping passersby and observers identify them, and then, after they remained unidentified for hours, burying them quickly in a single mass grave. ISIS of course knows who its prisoners are, but it neglected to let the families of the dead learn anything about the fate of their children, but rather used them as propaganda against the coalition, which does not distinguish “between them and us, as we are all Muslims,” as the ISIS members put it in an effort to encourage people to favor them.

Most likely, the organization would have executed the victims of the prison if they had remained alive. But the coalition was quicker to kill them. Two days ago in the town of Dablan, east of Deir-ez-Zor, more than 30 people were killed in an extended nighttime coalition bombardment, according to the Observatory. Local newspapers reported an even larger number, in addition to those who were wounded, some of them permanently disabled.

Are enough efforts being made to prevent the deaths of innocents? The distribution of ISIS bases and commanders' residence among the people may be a reason explaining part of the bloody scene, but other reasons without a doubt are contributing to this reckless disrespect for people’s lives, on the part of the coalition and on the part of those who guide the planes to their targets on the ground.

Bade al-Rawie, an activist in Deir-e-Zor, noted an observation that has drawn attention to the secret prison and other incidents, where ISIS commanders have suddenly left their homes before the raids that strike them. “A double agent working for both sides — ISIS and the coalition at the same time,” he suggests. He notes that ISIS is using these agents to misinform the coalitions warplanes – “Since who warned these commanders about the raids expected on their homes?” – while mentioning the names of the doctor and nurses killed in a coalition raid on the field hospital in the village of Jadeed Ekadat.

In a Financial Times investigation published recently about the coalition informant networks, the newspaper quoted a young man working in these networks as hearing an expression from his chief when the young man expressed anger about civilian deaths: “To do this work, you have to crush your heart and your conscience beneath your boots.”

In a narrower area of the province, between the towns of Al-Buleil and the first villages in the western countryside heading toward the city of Deir-ez-Zor, which is an area apparently allowed for regime and Russian aircraft, the fewer civilians there, because of the previous waves of displacement, has not helped reduce the number of casualties, as the pace of air raids and other forms of bombardment has increased recently.

The news coming from there every day or so bears the names of those killed individually or collectively, a mother or father or children, a grandmother or her grandchildren sleeping in their homes at night and then torn to pieces. With all this killing in Deir-ez-Zor, it is astonishing that it would become a destination for displaced people from the land ISIS loses in Syria and Iraq.

Day after day, ISIS puts up new barriers before those who think of fleeing from their control to the north, by carrying out death sentences for taking the smuggling path, and punishing those it arrests while trying to flee with 200 lashes on the charge of “commencing apostasy” before being sent to a closed Shariah training camp for 40 days for rehabilitation.

With more checkpoints, ambushes and spies, the opportunities to be saved narrow, even before the adventurous and those few who can afford to bear the expenses of the journey begin the hardship of traveling for days on roads ISIS has laid with landmines. Those who have survived this journey of death say that on the road they have seen the remains of human bones and exploded corpses eaten by dogs, belonging to those who have previously tried to flee and were lost in the desert and died from hunger, thirst or mines.