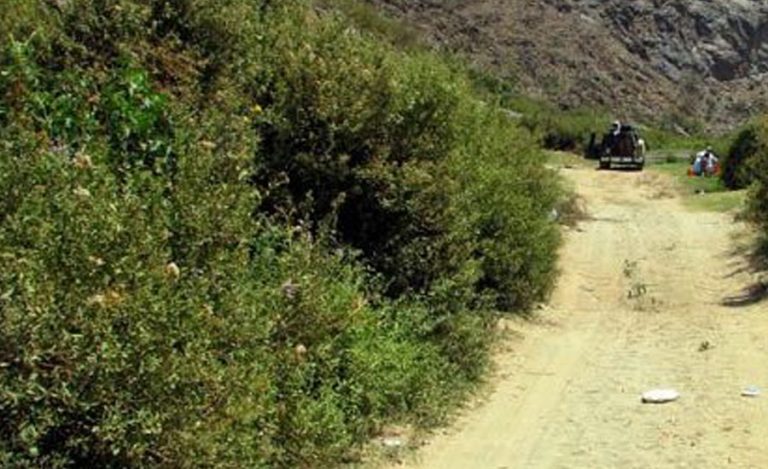 A bumpy road extends for 10 kilometers, interspersed with the Orontes River and the danger of passing by several villages under the control of regime forces and their shabeeha.

This road is considered the only connection between the villages and towns of the Houla plains and opposition-controlled areas in the northern Homs countryside.

The villages of the Houla plains are suffering from a siege which has been imposed by regime forces since 2012, assisted by the fact that it is surrounded by a number of villages with extremist sectarian tendencies, which prevents any goods from entering the area where more than 100,000 people live.

They do not have any means of securing the necessities of life, except this road, which connects the village of Ghranata on the western side to the northern Homs countryside and Houla on the other, and reaches the village of Aqrib in the southwestern countryside of Hama.

The Road of Death, the one outlet to break the siege

Despite its roughness and exposure to constant bombardment by regime forces, as well as shabeeha ambushes in the villages of Kafrnan, Kisin, and Al-Qabou, it is the only means available to break the series of sieges imposed on this area.

Aid activist Abdel Karim Ayoub told Tamaddon: “The wide geographical area over which opposition forces’ control extends in the northern Homs countryside, which connects [the rebels] to Bedouin areas, has helped find crossings and trade routes, and so the area has been supplied with necessary goods. Although prices have gone up, traders have been able to bring in the quantities of goods they want.

“This is not the case in the villages of Houla, which has pushed traders to use the 'Road of Death' to transport goods from the Homs countryside to Houla. The road is often exposed to bombardment and snipers, which has led to the deaths of dozens of people. The road becomes even rougher in the winter because of the mud that swamps it. Despite all of that, it is considered the best available option to secure the necessities of life in the area.”

Motorcycles a means to smuggle goods

Residents rely on motorcycles for transportation due to the difficulty of getting through large vehicles, which are easily targeted by regime snipers and checkpoints overlooking the road. The motorcycle drivers are called a “shaqee,” – who opens the way – and most of the items that they bring are flour, foodstuffs and fuel, while also transporting the goods that are made locally in these villages, especially livestock products.

Samer Abu Antar, who works as a transporter on the “Road of Death,” told Tamaddon: “The cost of transporting a load of goods from our area to Houla is between 3,000 and 4,000 Syrian pounds. One motorcycle can transport about 200 kilograms of goods, or about one barrel of fuel. Work on the road is very difficult and dangerous, but it’s a good way to make a living given the lack of work in the area.”

“A livelihood drenched in blood”

Abu Antar adds: “Regarding the course of the road, goods which need to be transported are secured in the evening based on the requests of the traders in this area. In the morning, before sunrise, the transporter starts to go, crossing the Orontes River — the ‘port’ — followed by rough roads prepared for motorcycle passage. If he hears gunfire, he hides among the rocks until it calms down. When passing loyalist villages, you need to move quickly.”

Abu Antar said that as a result of the daily work the sources of danger are known among workers, who take care to avoid them. It is a “livelihood drenched in blood” as Samer puts it, but it is necessary for both sides.

The transport operation can also lead to an increase in the price of goods, which increases the burden on residents, especially considering the difficult conditions in which they live as a result of the years of war.

Several months ago, the regime opened up the Al-Samalil crossing to connect the villages and towns of the Houla plains to the regime areas, but the arbitrary actions it takes against residents and the entry of shabeeha to the crossing have led to its nearly complete closing, meaning a return to the use of the Road of Death to secure the necessities of life.