The ease of buying weapons in the liberated areas is a key reason for the high numbers of armed crimes, according to Saudi-owned Al-Araby al-Jadeed 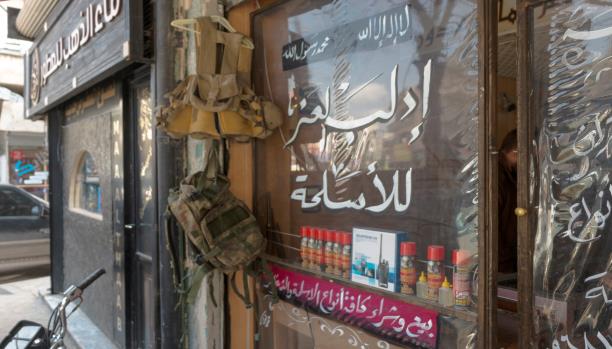 Fatima al-Qassem was paralyzed by shot from a Kalashnikov that her husband bought from a gun shop in Idleb, northern Syria. The bullet penetrated the body of the 20-year-old wife and broke a vertebra of her spinal column.

Her devastated father explained that "Idleb lives in chaos because of the ease of selling and the affordability of arms."

Fatima is one of 33 victims of gun crimes committed between January and April 2017. In the same period of time, 25 murders were committed, according to Hussein Hssayan, head of the Idleb Free Police media office.

Hssayan explained that the rise in crimes is due to the ease of procuring weapons, which led to the occurrence of 5,218 crimes that were reported during that period, according to a report documenting the crimes committed in Idleb.

Statistics reveal that 1,142 crimes — mainly theft and robbery — were committed in the region using guns, in addition to 272 cases of clashes and gunfights, 156 reported injuries, 15 cases of kidnapping, 16 enforced disappearances, and 112 cases of property damage.

Arms stores located in Idleb and the liberated areas in the north of Syria sell light weapons, ammunition and hunting weapons, as well as military uniforms, combatant flags and radios.

"The number of arms shops is almost equal to grocery stores," according to local human rights activist Ahmed Sarmini, who added that the number of these shops is around 200 in the province.

This situation has led Hay'at Tahrir al-Sham, a alliance of factions led by the Nusra Front, to issue instructions to all checkpoints to ban the trafficking of missiles and heavy weapons.