Amid the continual bombardment of the ISIS bastion, some residents have chosen to stay in Raqqa while others flee the danger of death, Enab Baladi writes 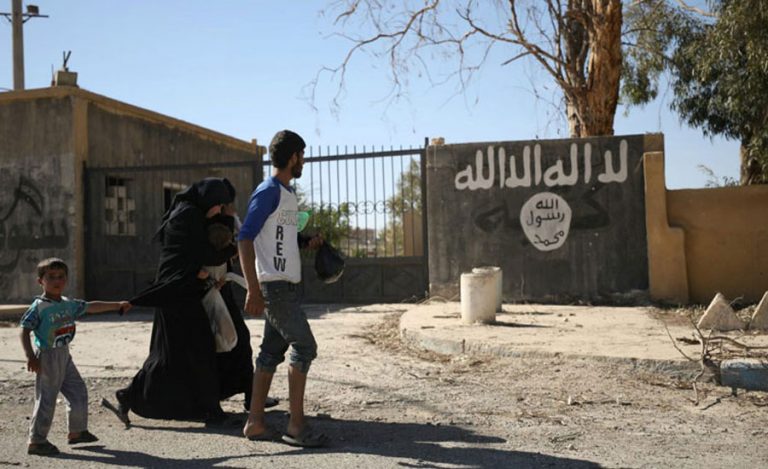 Despite the intensity of the fighting between the Syrian Democratic Forces and the Islamic State (ISIS) group in Raqqa, hundreds of people continue to live inside the city amid heavy bombardment, refusing to leave despite the danger of death.

A recent video circulated by activists on social media sites over the last few days has highlighted the decision by residents to stay inside the city.

The recording shows an old man soaked in his own blood and was said to be recorded in the Rameela district in Raqqa, which SDF fighters have recently slipped into. In the video, the old man, who is identified as Ahmed Zeinou, is asked the question, “Why didn’t you leave?” to which he responds: “Where should we go?”

News spread of Zeinou’s execution after the recording, which ended with an SDF fighter saying, “Go to heaven and see the virgins.” Some people who have stayed in Raqqa told Enab Baladi about the difficulties they suffer from inside the borders of the inflamed city.

What are they doing in the city?

The most prominent of questions which have arisen is: “Why put their lives at risk and insist on staying?” Residents have told many stories of civilians who have refused to carry arms or to leave their city, saying that they “have born the chaos of the rebels, the insanity of the Islamic State, as well as the injustice of the coalition warplanes.”

Abou Mooed, 50, still lives in Raqqa today. Speaking to Enab Baladi, he attributed his staying to a great love for the city’s streets, saying: “I am like a fish that would die if it left the Euphrates. All I want is to remain inside my home.”

“Who will water the street trees if everyone goes?”

Thousands of residents currently live in Raqqa despite the continual bombardment and fighting. One man in his 50s said that security is a relative condition: “Death is in God’s hands alone, and sticking to your land and country is a duty and not a choice.”

He describes himself as an old man and says that he wants nothing but 2 meters of ground neighboring his house to bury his body when he dies. He says: “I will not leave Raqqa and I will be buried near by my wife, who died years ago.” He asks: “To whom would I leave her? Who will water the street trees if everyone leaves?”

There are no real statistics of the number of civilians still in Raqqa, but activists insist that hundreds of families will have disregarded their fate in the coming days, in light of the “iron media curtain” which has been imposed by the SDF in the areas it controls.

The ugliness of leaked scenes filmed from Raqqa and fears of a similar destiny has not prevented Abou Abdullah from staying in the city until today. As he told Enab Baladi: “Alienation of the spirit is heavier than wounds, bombardment and destruction — or even death, imprisonment and torture.”

A man in his 40s describes what is occurring in Raqqa as a “huge destruction” and says that he is “expecting the reconstruction to be shared among warlords.” He says that what is happening “reveals the falsehood and propaganda of all parties which want to expel the people and destroy the city, and who are not concerned with the fate of civilians.”

Video recordings have documented Raqqa being hit by white phosphorus and dozens of people being killed, as the coalition says it is “taking the necessary measures to limit the risk of unintentional harm to civilians,” while the SDF is accused of carrying out displacement and ethnic cleansing in the region.

“Whoever leaves his home loses his strength”

The lack of health services, scarcity of food, and collapse of all aspects of life in the city was not enough for many to leave, including Umm Mohamed, 63, who still lives with her neighbors in Raqqa after the departure of most members of her family. She says: “Whoever leaves his home, loses his strength.”

The woman in her 60s, who fled Deir-ez-Zor and settled in Raqqa five years ago, said that the decision to stay in their homes comes within the context of “defending the city from the greedy,” adding to Enab Baladi that she “believes in the need to preserve it. The reason I am staying here cannot be explained or subjected to the laws of life, reason and logic.”

Feelings hard to explain, related neither to age or sex, are seen by the people of the city, who consider themselves part of the mosaic of the Syrian war and its stories, saying that their insistence to stay does not make them better than Zeinou, “who died at the hands of his executioners and whose story of love for his city ended in blood.”