After facing further displacement, newcomers to the mountain region have been warmly welcomed by locals for the religious holiday, Zaman al-Wasl writes 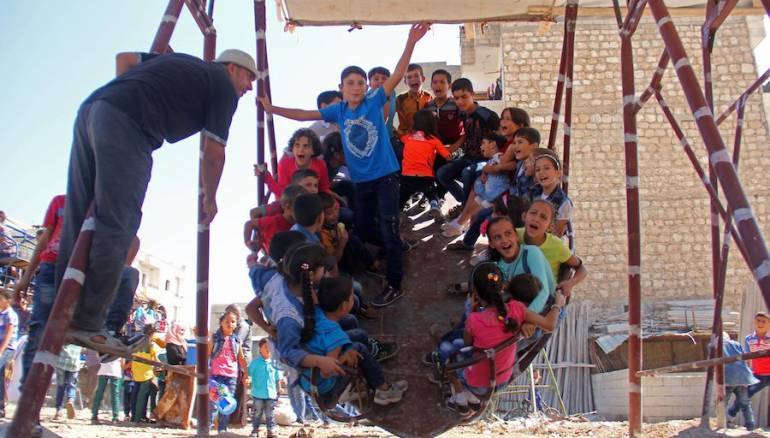 This year's Eid al-Adha holiday is a heavy burden for the displaced people in the eastern region of Qalamoun in the countryside of Damascus. The holiday brings with it bitter memories which the war is trying to erase. However, the warm welcome of the people in the region gave those displaced from Lebanon’s border a sense of respite and hope, that one day they will live safely again.

Umm Ali, a 55-year-old woman, arrived in the city of Al-Rahba weeks ago as part of the convoys that transported fighters from the Saraya Ahl al-Sham group and their families from Lebanon’s Arsal into the area. She is currently living in one of the schools allocated to temporarily shelter the newly arrived in the city.

Speaking to Zaman al-Wasl, she said, “For years we have been suffering from the bitterness of displacement from one town to another, and it has been a long time since we celebrated this occasion [Eid al-Adha], especially in light of the difficult days that we lived in the Arsal camps. Days [were] filled with fear and constant worry about raids and sudden arrests by the Lebanese Army and Hezbollah.”

She added that her arrival with her family to Al-Rahba had given them the opportunity to catch their breath after being overwhelmed by the assault and the displacement.

Umm Ali explained that Eid in Al-Rahba differs greatly from the previous Eid holidays. “My children found themselves some friends and went with them to the Eid prayer, while my grandchildren are planning to go with the other neighborhood children to the playground to play and entertain themselves.” She said that the festive atmosphere in the city is beautiful, and it is clear that the residents are happy despite the siege the city is witnessing.

“Our neighbors gave us sweets and food, and they were very friendly and did not deny us anything from the first day we came here, and this relieves us a bit from the harsh living conditions,” she said.

The situation appears a little different for Umm Ammar, a mother of four, who moved to Al-Rahba from the Eastern Ghouta three years ago. Since coming to the city, she has been living in a rented apartment with her family. According to Umm Ammar, there are large differences in the way residents are celebrating Eid due to the financial capacities of each household.

“Life is very expensive for the displaced because they have nothing, and although my husband works as a blacksmith, I was unable to buy all the clothes for my children, because of the high prices and the poor condition,” she said. “Although I was buying cheap clothes, I did not succeed in buying new clothes for all my children this holiday,” she added.

“We replace the traditional Eid sweets with cheap varieties of pastries, some candies as well, and we economize in quantities as much as possible, and the joy of Eid is necessary, and the desserts have a strong impact in the hearts of children,” she added.

Wafaa, a retired art teacher, launched a unique individual humanitarian initiative. Alongside her daughters, she makes homemade sweets to dish out to the poor and displaced families that recently arrived in Eastern Qalamoun.

Speaking to Zaman al-Wasl, she commented: “The living conditions deprived many [people] of the joy of the Eid, and we as the people of the region must lessen the suffering of the displaced families and share the joy and happiness of Eid. Eid, in its rituals, has mercy and values that people must preserve.”