Security and financial concerns are proving a barrier for families of the liberated south who wish to send their children to school, Iqtissad writes 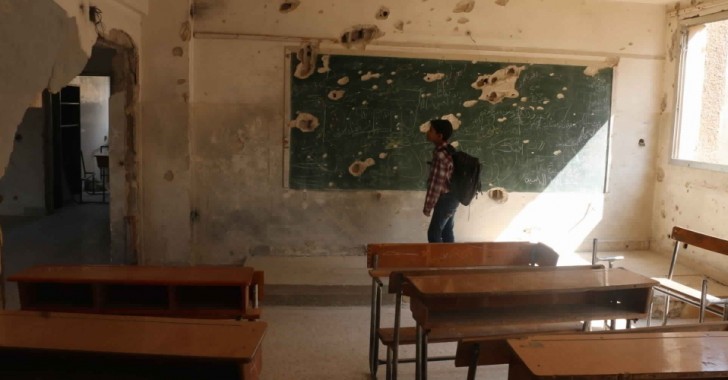 A new school year is upon the people of the liberated areas, and the grinding war which Syria has witnessed for nearly seven years is still ongoing, with all its consequences, circumstances, concerns and sufferings that have exhausted the country and its citizens.

Abou Qais al-Hourani, an activist, explained that "the citizen who has just escaped the pressure of Eid al-Adha expenses, even if they were minor, now faces major expenses throughout this month, in which preparing for the winter coincides with the opening of schools."

He said that "recording new births in the departments under regime control with regards to the residents of the liberated areas requires the parents of the newborns going in person to these areas and completing their procedures, which is difficult because of security threats they face." He added that appointing a lawyer or intermediary to complete this required up to tens of thousands of Syrian pounds for the necessary bribes and payments – a sum most residents are unable to afford.

Abou Suhail, 48, a civil servant and father of four children who earns a salary of 47,000 Syrian pounds, said: "The economic situation for most people is very bad," adding that he was not able this year to buy stationery for his children, and was only able to acquire pens and notebooks. He added that there was no way to afford new clothes and bags despite his children needing them.

Suhail said that he did not have enough money to buy even some of the necessary stationery, and that even if he scrounged he would not be able to meet these expenses because his salary is barely enough for necessities.

"We are waiting for humanitarian groups and organizations to perhaps offer us something this year," Suhail said. He said that in previous years he received aid offered by some groups which included stationery, clothes, bags and some supplies, which slightly reduced the burden on residents.

Abou Nadal, a defected soldier, said: "A student needs between 10,000 and 12,000 pounds at least for the price of school supplies." He said that two or three children in the family required a special budget, which most of the family cannot afford, including those receiving aid from outside the country.

Regarding the demand for buying stationery and supplies for school, Abou Emad, the owner of a bookstore in the Daraa countryside, said that demand for stationery was very weak because people did not have financial liquidity and they have not yet recovered from the blow of Eid al-Adha expenses.

He added that the prices this year were high compared with last year, despite the fact that the goods were the same.

"Many of the schools in the liberated areas take the economic situation of residents into account and do not require students to wear school clothes and leave it to their ability, even in regime schools," he said.

He said that the new school year began on the 6th of this month and that the occasion was celebrated in regime areas in Daraa province with a notable Russian presence, with the raising of Russian flags and pictures of President Vladimir Putin. Meanwhile, in the liberated areas, destroyed by Russian warplanes in Daraa city, the Yarmouk camp and the Al-Sidd road, locals searched for some usable classrooms among the rubble where they could find shelter to give lessons to their children.