River has acted until recently as a buffer between the U.S.-backed SDF and Russian-backed Syrian army during the campaign to retake the ISIS stronghold 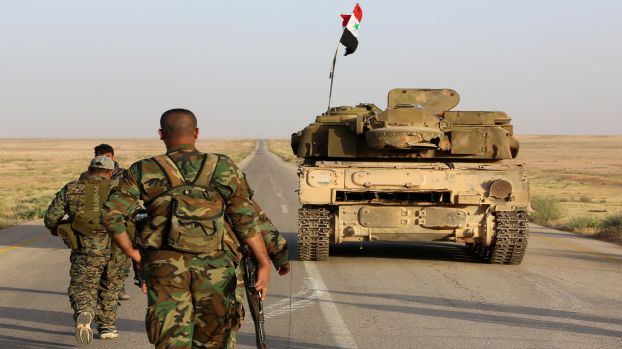 Syrian regime forces have secured new ground from the Islamic State group in Deir-ez-Zor after taking control of new points on the eastern bank of the Euphrates.

The official Syrian news agency, SANA, said that regime forces had continued their advance toward the village of Al-Sabha on the eastern bank of the Euphrates toward the Conoco gas field, where they took control of points in the villages of Mazloom and Muraat.

Meanwhile, on the western side of the city, regime forces carried out operations on ISIS positions under the cover of artillery fire, which ended with control over areas in the village of Al-Shamatiya, and resulted in the deaths of a number of ISIS militants.

Earlier this week, regime forces were able to cross the Euphrates toward Hawijat Saqar from Al-Hafra, which it took control of two days earlier. Meanwhile, government forces took control of a number of points on the city’s southeastern outskirts and in the southeastern countryside of the Deir-ez-Zor-Mayadin road and in the direction of Ain al-Boujemma and Al-Khareeta west of the city.

Ahmed Abou Khawlah from the Military Council in Deir-ez-Zor, which is under the authority of the Syrian Democratic Forces (SDF), said that units from the Syrian army had crossed the eastern bank of the Euphrates. He warned of clashes with units of the Syrian army, saying that his fighters are ready to engage if regime forces do not remain on the other side of the river.

The Russian Foreign Ministry reported on Friday that Syrian government forces had crossed the river for the first time since the start of the campaign against ISIS in Deir-ez-Zor.

The U.K.-based Syrian Observatory for Human Rights (SOHR) also reported on the regime forces crossing to the other bank of the river. It explained the regime's campaign from the west was coinciding with the SDF campaign from the east, creating tension between the two sides.

The SDF said that they had been attacked by regime forces backed by Russian warplanes on Saturday after comments by Abou Khawlah saying SDF forces would not allow the regime army to cross the river and that it would consider any fire toward them an attack.

The SDF have advanced to several kilometers from the river, while the regime army moved to take control of most of the city, which is also largely on the western side of the river.

Both campaigns against ISIS, one of which is backed by the United States and the other by Russia, are still far from the path of the other, as the Euphrates River represents the dividing line between them.

Syrian President Bashar al-Assad, who currently controls the main urban centers in the country’s west, has vowed to retake all Syrian territory.

The Syrian Democratic Forces, which are dominated by the Kurdish People’s Protection Units, have taken control of most areas in the country’s northeast.

The Syrian opposition groups control pockets in Syria’s west, while the area controlled by ISIS is rapidly shrinking, but it includes most of the oil-rich Deir-ez-Zor province.

In addition, the SDF Military Council said yesterday that it was six kilometers away from reaching the Euphrates River in Deir-ez-Zor.

The council’s commander said that their fighters were concentrating in the sugar and textile factories, saying they had opened a new front against ISIS toward the city of Sour, east of Deir-ez-Zor, after they were bombed by Syrian regime and Russia warplanes.

He said that regime forces had crossed the Euphrates River but that they had stopped in the Mazloum area on the border of the Euphrates to bombard civilians in the surrounding villages.

Coinciding with this, Kurdish internal security forces (Asayish) placed blame in a statement on forces allied with the Syrian government for carrying out a fatal bombing in the city of Qamishli. The SOHR reported that a motorcycle strapped with explosives exploded in the northeastern city, killing a child and wounding six other people, while Syrian television said that the blast wounded four people without reporting any deaths. Qamishli is in an area mostly under the control of Kurdish security forces.