Civilians forced to flee the violence tell Enab Baladi of the situation inside the group's stronghold, as regime and SDF forces edge closer to taking the city 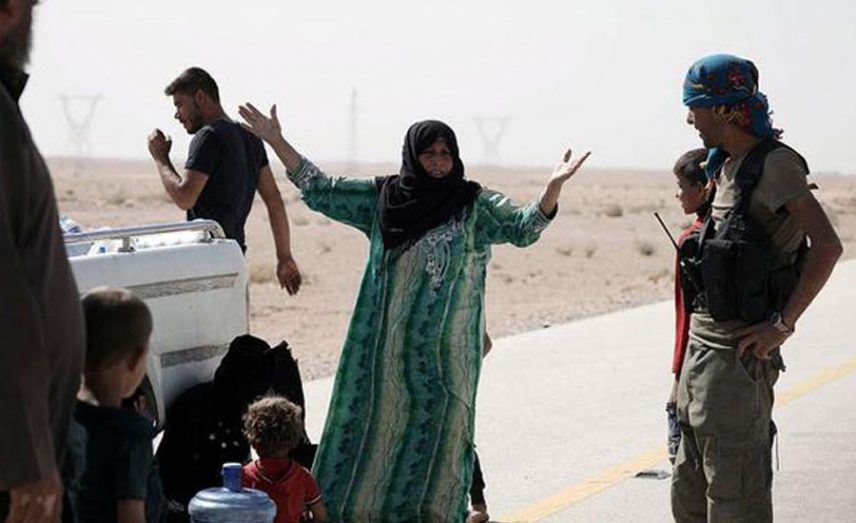 Residents of the city of Deir-ez-Zor have protested the looting of abandoned homes by the Islamic State (ISIS) organization after their inhabitants fled the battles which are escalating throughout the province.

President Bashar al-Assad’s forces have meanwhile moved to expel the organization from the area after expanding their control to the east of the Euphrates River, increasing the number of residents displaced from the city out of fear of clashes.

Abou Osama, 63, who was forced to leave with his family from his home in the Hamaidiya district, told Enab Baladi that he did not blame his children or wife for their decision to leave, since “they were looking for a safe place," despite his hopes that he would one day be buried beside his parents in Deir-ez-Zor.

The man spoke of the organization's booby trapping of most of the city's houses. He said civilians still live close by because of the lack of alternatives and money to flee.

Abou Osama added that the organization “was intent on destroying all documents and contents in its bases, while its fighters have become warier of people and are now suspicious of everything around them.”

According to Abou Osama and others who recently left Deir-ez-Zor, ISIS fighters have abandoned a large number of their bases and have relocated to outside the city, in addition to clearing out hundreds of houses and moving their contents for sale.

Abou Abdullah, 32, who left the city a short while ago, told Enab Baladi that the organization had decreased the salaries of its fighters. “I saw its fighters entering homes and stealing the contents under the pretext that they belong to apostates and then selling them.” He added, in local language: “I swear, they didn’t leave a nail in the wall.”

The young man says that most of the group’s fighters had left the city with their families, “especially the Iraqis,” diminishing the number remaining to a few hundred “including foreigners, Asians and their families.” He said that the group had “moved weapons into the areas it controls in the province outside the city’s borders.”

Abou Abdullah said he believes the ISIS militants “have discovered the deception they were living.” Activists in the city corroborated this, confirming the “swift collapse of the group.”

Events have accelerated on the ground in Deir-ez-Zor in recent days and Assad’s forces have advanced around the city, especially in the area of Hawijah Saqar and the village of Marat. The areas under the ISIS' control are nearly all surrounded.

Far from the details of what is occurring in the city, the wife of Abou Abdullah said there were “major” difficulties they faced while fleeing.

She told Enab Baladi: “We tasted death and woe,” adding that, “I paid more than 2 million Syrian pounds to reach Turkey with my family,” including the price of a water crossing by boat at a cost of about 150,000 pounds.

Abou Abdulah spoke of “large networks to smuggle people from the [ISIS] organization’s areas making huge amounts of money and working with some of the organization’s members to facilitate the movement, and secure exit to the Syrian Democratic Forces’ areas.”

Umm Abdullah described her journey on motorcycles in the dark as “risky,” saying that “the smuggler left us in the middle of the desert after confirming we had left the organization’s areas, which forced us to walk more than 15 kilometers to reach the SDF checkpoints.”

Deir-ez-Zor's displaced residents said they considered the choice to abandon their city to be “leaving the grave,” explaining that the theft of their homes and their forced expulsion will make “stories of blood and tears and a history that must be preserved and told so as not to be lost.”