Struggling to see the benefits of the Russian-backed cease-fire, displaced residents are moving toward deals with the regime in an effort to return to their homes, Enab Baladi writes 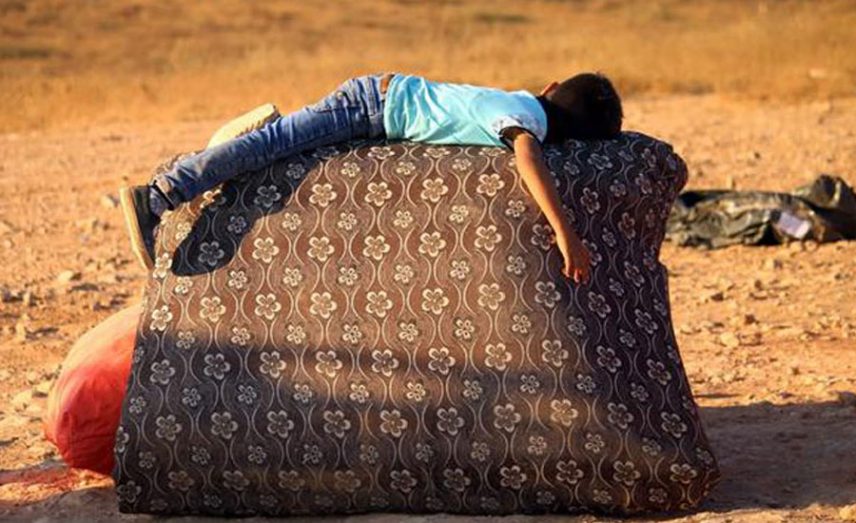 The province of Daraa is close to entering its third month under the de-escalation zones agreement signed in July between the Syrian opposition and Russia, seeing an end to military operations between the two sides.

The agreement has given rebel groups a chance to breathe and has opened up room for aid organizations and civil society actors to mobilize development projects. Meanwhile, the regime has presented an initiative to revive the “reconciliations” issue which it has failed to advance for a number of months.

The issue of cities and towns which have been vacated was the first to be broached, as the absence of fighting and the opposition's disadvantage led a number of people of these areas to refuse to return to their homes without negotiations with the regime, according to a source from the negotiations delegation of the city of Al-Sheikh Maskin.

The source, who asked not to be named, told Enab Baladi that “the delegation was formed by a number of well-known figures from all towns, with the aim of returning people to their homes after the rebel groups were unable to do that.”

He said that “since [Syrian President Bashar] al-Assad’s forces took control of the city of Daraa, the rebel groups have refused to carry out any military action to re-liberate it, despite having the capabilities, so that the people became totally convinced that they were victims of deals to deliver the city to Assad’s forces.”

He added that in “all the cities that have been vacated, the rebel groups have prevented any military action to re-liberate them.”

The city of Al-Sheikh Maskin and the towns of Kharbet Ghazaleh, Atman, Namer and Deir al-Adas are the most prominent areas which Assad’s forces have control of in the southern province after totally ejecting their residents. Any fighting on the part of the armed opposition aiming to retake Daraa city has been cut off.

Before these developments, an opposition negotiations committee from Al-Sheikh Maskin was able to hold a meeting with regime representatives in the city of Izraa. The regime’s demands did not exceed the delegation's expectations, according to the source, who said that the members knew that the regime was in a “strong position” and its terms for reconciliation were expected.

Its conditions focused on the delivery of weapons and on a number of residents volunteering in the National Defense Forces militia, alongside the return of defectors for service in Assad’s forces. The regime did not offer anything in exchange except delayed promises.

Negotiation delegation lost between the regime and Dar al-Adel

The disappointment of the negotiations delegation did not stop here. Soon after, the Dar al-Adel court in Houran ordered the arrest of the delegation members on charges of trying to implement reconciliations with the regime, only to release them on bail after a few days.

The source described the court's actions as “an attempt to show its authority and strength as a judicial body, but it was not able to display this authority except over the weak and it failed in front of many people.”

The source warned of the ire of the displaced residents as they are forced to endure their conditions, saying that the message which the Dar al-Adel court and rebel groups had sent them was that “we will not allow you to negotiate with the regime to return.”

Alongside news of Al-Sheikh Maskin’s reconciliation, rumors have emerged that many other towns, such as Ankhal, Kafr Shams and Dael are also seeking their own resolutions, pushing local councils and rebel groups to issue statements denying these reports.

The rebel groups working in the town of Kafr Shams issued a joint statement promising to “strike with an iron fist anyone who is tempted to trade in the blood of our martyrs,” in a reference to those promoting reconciliation.

In contrast, the military council in the city of Dael issued a statement denying all talk about reconciliation in the city, saying that promoting this issue is “a cowardly act, mobilized by the regime’s intelligence to sow strife inside the city and across other liberated cities.”

Meanwhile, military and civilian groups in the city of Ankhal issued a joint statement in which it promised those who promoted reconciliations a “blow from an iron fist," saying he "would subject himself to raids, arrest and being held to account,” and supported in its statement the Dar al-Adel court in Houran.

The halt of the fighting along the entire southern front throughout the past “de-escalation” months has pushed residents to imagine what kind of future awaits the southern region. Most of the cities and towns of the province still under control of the rebel groups are suffering from a decline in the living situation amid a near-total loss of self-reliance, with these regions relying on what the regime provides them in terms of fuel and building materials, together with food aid and various supplies from Jordan. This fact has been exploited well by the regime, which has sent many intermediaries to mobilize delegations in more than one town, bringing the reconciliation issue to the forefront once more.

Even if these conditions are not a convincing justification for the rebel groups to respond to the regime’s efforts, it is still the right of residents to question the usefulness of the de-escalation agreements if these deals are unable to give people any hope in the future without a reconciliation with the regime.